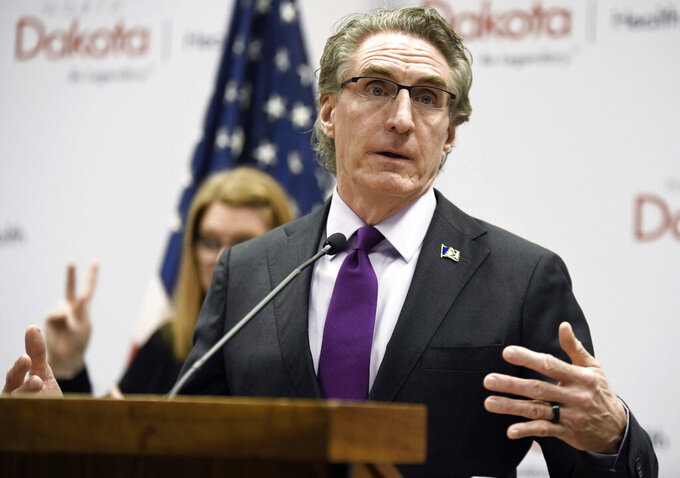 FILE - In this April 10, 2020, file photo, North Dakota Gov. Doug Burgum speaks at the state Capitol in Bismarck, N.D. North Dakota and South Dakota have the nation's worst rate of coronavirus deaths per capita in the last 30 days. Despite advances in treating coronavirus patients, hundreds more people in the Dakotas have died in recent weeks than during any other time of the pandemic. (Mike McCleary/The Bismarck Tribune via AP, File)

Walz made the comments Tuesday during a news conference in St. Paul where he announced new restrictions on bars, restaurants and gatherings in Minnesota. He lamented that Minnesota is catching up with the Dakotas, which lead the country in new cases per capita.

The Democratic governor said he's not blaming neighboring states for that, but he said this summer's Sturgis Motorcycle Rally in South Dakota was “absolutely unnecessary,” and that data shows it helped spread the virus beyond that state. Singling out Noem, who is a Republican, he said he wishes the state would have canceled the rally and imposed a statewide mask mandate, as Minnesota has.

“And this one’s a little bit personal because the governor of South Dakota has taken to traveling to other states and criticizing others — now at a time when that state’s hospital capacity is overwhelmed,” Walz said.

Noem has repeatedly said she won't issue a statewide mask requirement and has voiced doubts about health experts who say face coverings prevent infections from spreading. She has used her refusal to issue mandates to become a rising star among conservatives, and her travels to presidential proving grounds like New Hampshire and Iowa are fueling speculation that she is eyeing a 2024 run for president.

Fury also pointed to comments made by U.S. Surgeon General Jerome Adams on Tuesday in Pierre, where he said South Dakotans don't need a mandate to do the right thing and wear them voluntarily.

“Governor Noem has provided her people with all of the science, facts, and data, and then trusted them to make the best decisions for themselves and their loved-ones,” Fury said. “She will be continuing that approach.”

By contrast, in North Dakota, Republican Gov. Doug Burgum said this week that his state's hospitals are under “enormous pressure" from surging COVID-19 cases. He has pleaded with people to wear masks and praised communities that have mandated them, but has avoided requiring masks himself.