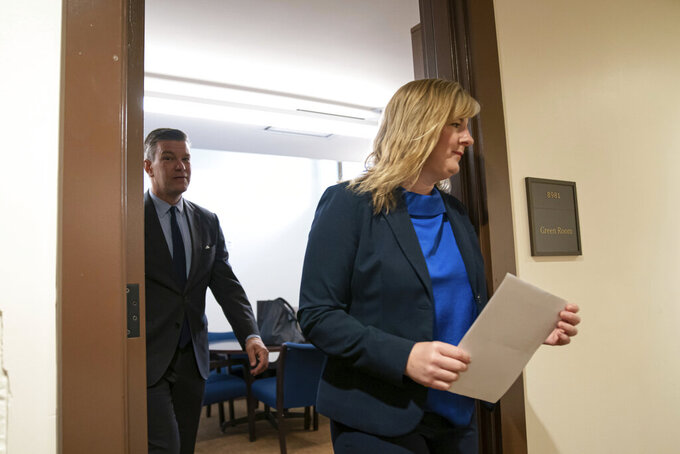 House Speaker Melissa Hortman, DFL-Brooklyn Park, and House Majority Leader Ryan Winkler, DFL-Golden Valley enter a press conference before the start of Monday's special session on June 14, 2021, in St. Paul, Minn. The Minnesota Legislature convened for the first day of what's expected to be a prolonged special session to pass a two-year, $52 billion state budget. Leaders met all weekend in the lead up to Monday's special session to try and finalize deals on a number of issues, including police reform and education funding. (Glen Stubbe/Star Tribune via AP)

ST. PAUL, Minn. (AP) — Minnesota lawmakers returned to unfinished business at the Capitol on Monday as they convened for a special session to finalize a two-year budget and avert a potential government shutdown at the end of the month.

Democratic House Speaker Melissa Hortman, of Brooklyn Park, said during a news conference that four of the 13 unresolved budget bills were “completely ready to go," including higher education, commerce and energy, and agriculture. Hortman said the public safety budget bill — which she called her number one priority — will likely be “the last bill to wrap” as lawmakers debate which police accountability provisions to include in the final package.

“This work is very hard and it's ongoing and I think both Republicans and Democrats are committed to it,” she said. “The work will be better done the less that it is politicized.”

Gazelka, of East Gull Lake, said negotiators working on the public safety budget have agreed on at least five police accountability measures, and that he's “95% confident” that they can ultimately reach an overall agreement without the top leaders intervening.

House Democrats passed a broad police accountability package during the regular session in an effort to build on a bill enacted last summer in response to the death of George Floyd, but Senate Republicans have resisted ideas that they consider anti-police.

As required by law, Gov. Tim Walz called the Legislature back into session on Monday as he renewed his peacetime emergency powers for another 30 days.

Conservative protesters — who oppose the Democratic governor's reliance on those powers to manage the state's coronavirus response and Gazelka for not doing more to stop Walz — filled the rotunda outside the House and Senate chambers on Monday as the public returned to a Capitol building that reopened last week after being closed for more than 400 days due to the pandemic.

But another Republican attempt on the House floor to strip Walz of his emergency powers failed Monday, though Gazelka said he plans a vote later in the special session to remove the governor's emergency authority. Walz has said he still needs those powers to oversee the state’s vaccine rollout and a few other pandemic matters, including maintaining eligibility for federal aid.

Senate Republicans introduced legislation on Monday that would fund state agencies in case lawmakers aren't able to finalize a budget by July 1. Democratic House Majority Leader Ryan Winkler, of Golden Valley, called the proposal a “terrible mistake” that would allow Republicans a way to walk away from negotiations.

Walz met with top legislative leaders late last week ahead of the special session to try to get closer to a compromise on budget targets and policy proposals. Failure by the governor and legislators to agree on a budget by July 1 will result in at least a partial state government shutdown.

“The fact is if we do not get done by July 1, the ramifications are too serious for Minnesota,” Gazelka said. “We have a few loose ends but it's absolutely coming together. The speaker, myself, the governor — we're going to get it done.”