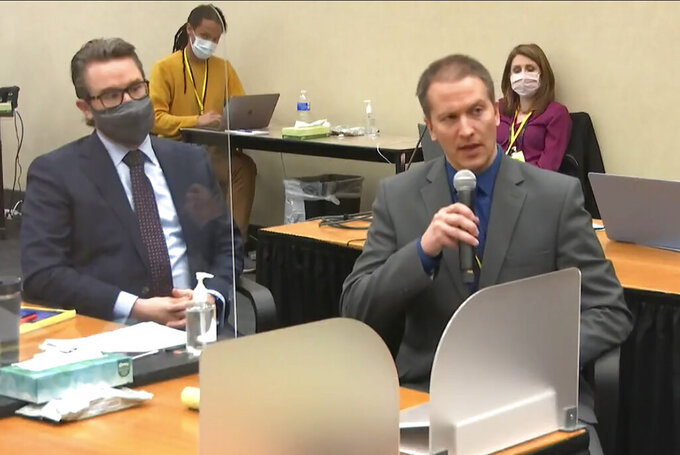 “The time is right to consider whether the current requirements for audio and video coverage of criminal proceedings in courtrooms should be amended to accommodate broader public access,” Minnesota Supreme Court Chief Justice Lorie Gildea said in a statement announcing the order.

The order doesn't specifically cite Derek Chauvin's trial, but it was Minnesota's first criminal case in which gavel-to-gavel TV coverage was allowed, from jury selection through the verdict. Chauvin's sentencing Friday will also be televised.

University of Minnesota media law expert Jane Kirtley said the order is a good sign that the state court system will open up more proceedings to cameras and livestreaming technology. She said the coverage of Chauvin's trial went “extremely smoothly,” without the media circus some feared.

“I am more hopeful about revisions to this rule than I have been in 20 years,” Kirtley said.

The chief justice elaborated on her order in her annual State of the Judiciary speech to the Minnesota State Bar Association on Thursday, remarking on what she called the unprecedented decision to provide non-stop remote public access to one of the highest profile trials in the state’s history.

“I have seen it estimated that some 23 million people watched at least part of this livestreamed trial,” she said, according to a text provided by the court. ”While the decision to allow camera coverage of this trial was based on the unprecedented public health restrictions in place during the pandemic, it would be a mistake for us not to reflect on the lessons learned and experiences gained through this process.”

Minnesota’s rules on audio and video coverage were last updated in 2018. They allow remote coverage of criminal proceedings until the verdict, but only with the consent of all parties, which rarely happens. Coverage of sentencings is allowed without consent, unless the judge finds cause to prohibit it. While federal courts generally bar cameras, many other states permit them.

The COVID-19 pandemic and the intense public and media interest in Chauvin's case led Hennepin County District Judge Peter Cahill to allow full audiovisual coverage to fulfill the constitutional requirement for a public trial. Court TV and numerous websites streamed the proceedings around the world. News organizations made extensive use of the video feed, audio and photos taken from the video.

Gildea ordered the high court's Advisory Committee on the Rules of Criminal Procedure — which is made up of judges, prosecutors, and defense attorneys — to study the matter and report back with recommendations by July 1, 2022.

Kirtley said she couldn't rule out that the committee might come back with “a less than full endorsement of camera coverage,” noting that some prosecutors, defense attorneys and advocacy groups have resisted it in the past. But she noted that state Attorney General Keith Ellison, who had argued against cameras for Chauvin's trial, has softened his stance, and that the chief justice has expressed support in principle for more media access.

Gildea's order says audio and video coverage has been a “critical component of public access during the COVID-19 pandemic,” when court facilities were largely inaccessible to the public, and that “fulfilled the public interest in the fair administration of justice.” She wrote that the constitutional right to a public trial may sometimes warrant expanded media coverage, even without consent from both sides.

"If we're all committed to the idea of public justice, I think everyone would agree that cameras in the courts are the best way to assure that for everyone,” Kirtley said.