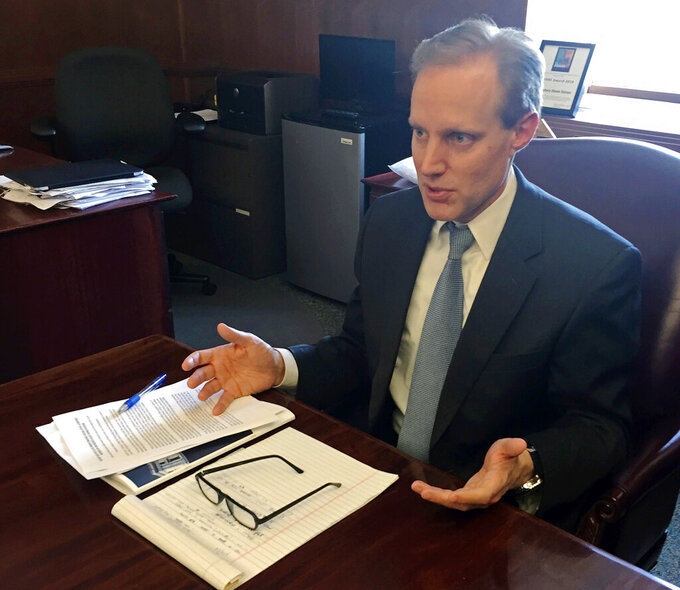 FILE - In this March 16, 2018 file photo, Minnesota Secretary of State Steve Simon discusses election security issues in his St. Paul, Minn. office. Minnesota will waive its witness requirements for absentee ballots for the statewide primary election in August under the settlement of two lawsuits sparked by the health threat from the coronavirus pandemic. The lawsuits were filed by political arms of the League of Women Voters of Minnesota and the Minnesota Alliance for Retired Americans. A Ramsey County judge signed off on the consent decree with the retirees Wednesday, June 17, 2020 while a federal judge scheduled a hearing for Thursday on the league's case. (AP Photo/Steve Karnowski,File)

MINNEAPOLIS (AP) — A post-election fight over whether Minnesota's election laws should be tightened or changed to make voting easier heated up Wednesday as a key Senate panel backed a Republican proposal to require people to present photo identification at the polls.

GOP Sen. Scott Newman, of Hutchinson, framed his bill as being aimed more at increasing voter confidence in election results than at preventing voter fraud. Democratic Secretary of State Steve Simon blasted the effort as unnecessary. He said voter fraud is “miniscule” in Minnesota and that the ID requirement could disenfranchise “hundreds of thousands of eligible voters," particularly older people.

Newman said he expects the bill to hit the floor of the Republican-controlled Senate after more committee stops. Thirty-six states have some form of voter ID law. But the bill is unlikely to become law this year, due to the traditional Democratic opposition to anything that might make voting harder and suppress turnout. Similarly, an election bill set for a hearing Thursday in the Democratic-controlled House, which aims to make voting easier, is likely to meet with stiff GOP resistance.

The competing proposals highlight how the deep divide between Republicans and Democrats over whether the November presidential election was free and fair has not narrowed, even in the wake of the insurrection at the U.S. Capitol on Jan. 6 and despite the fact that former U.S. Attorney General Bill Barr said before leaving his post that there was no evidence of widespread fraud that would overturn the result.

“This country has seen a tidal wave of disinformation about our democracy, about voting and about our last election,” Simon told the Senate elections committee. “These are lies designed to manipulate and mislead people. So here is the truth: the truth is that the 2020 election was fundamentally fair, honest, accurate and secure. Period. State and federal courts around the country have examined and reexamined allegations to the contrary and found nothing — no material fraud or misconduct."

Minnesotans rejected a voter ID law in 2012, when it appeared on the ballot as a constitutional amendment. Newman sponsored both the 2012 amendment and a voter ID bill last year that stalled out after the coronavirus pandemic disrupted work at the Legislature.

Newman took offense at the secretary of state's assertions. He said his bill isn't about the 2020 election — and that he isn't excusing anybody's conduct — but that it raises legitimate issues that lawmakers have the right to discuss. He noted that a 2008 U.S. Supreme Court decision established that promoting public confidence in elections is a legitimate state interest that can justify voter ID requirements. Even if fraud is uncommon, he said, it could make a difference in close races.

“I candidly am bewildered by the opposition — the visceral opposition — to using a modern tool to try and protect the integrity of ours elections.” And he disputed Simon's claim that “hundreds of thousands” of voters could be disenfranchised.

Newman’s bill would let voters without valid ID cast a provisional ballot. They would then have eight days to go to their county voting office with the proper documentation to get their ballots counted. But critics say those voters would be unlikely to make the extra trip due to lost time and money, effectively disenfranchising them.