Minor leagues get a reset with 120-team regional alignment 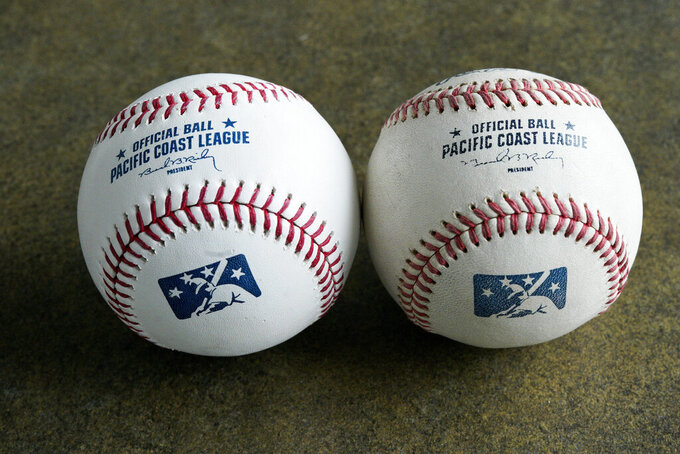 FILE - In this May 7, 2019, file photo, a new official Pacific Coast League baseball, left, is seen beside a baseball from the previous year in Papillion, Neb. Major League Baseball has reorganized its minor leagues in a 120-team regional alignment, MLB announced, Friday, Feb. 12, 2021. The leagues have not yet been named and Major league owners, Commissioner Rob Manfred and his staff have not decided whether to retain the traditional names of the leagues, such as Pacific Coast League. (AP Photo/Nati Harnik, File)

MLB released a plan Friday for two Triple-A divisions, and three divisions each for Double-A, High-A and Low-A. Forty affiliates were dropped from 2019, the last season under the old minor league system, and the remaining teams were offered the 10-year licenses in December. All 120 accepted by Wednesday’s deadline

The leagues have not yet been named. Major league owners, Commissioner Rob Manfred and his staff have not decided whether to retain the traditional names of the leagues, such as the International and Pacific Coast at Triple-A, the Eastern, Southern and Texas at Double-A and the California, Florida State and South Atlantic, which had been at Class A.

Triple-A teams for now remain scheduled to open 144-game schedules at the start of April but are likely to be pushed back until the start of May because of the pandemic.

Double-A teams, scheduled for 138 games each, and High-A and Low-A teams, with 132 games apiece, are for now slated to open in early May.

Top minor leaguers probably will spend April at alternate training camps, used by MLB teams to keep potential callups in shape last year, when the entire minor league schedule was canceled due to the virus.

Regular-season schedules are to be announced next week. Schedules will be regionalized and include six-game series to reduce travel and cut expenses, a person familiar with the planning told The Associated Press. The person spoke on condition of anonymity because that detail was not announced.

Minor league postseason formats have not yet been determinedbecause of the pandemic.

Each franchise’s top four affiliates will include one team apiece at Triple-A, Double-A, High-A and Low-A. Additional clubs are allowed at spring training complexes and in the Dominican Republic.

MLB ended the Professional Baseball Agreement that governed the relationship between the majors and minors. The minors are being run from MLB’s office in New York under the supervision of Peter Woodfork, MLB’s new senior vice president of minor league operations and development, taking over from the Florida-based National Association of Professional Baseball Leagues, which had governed the minors since 1901.

The New York-Penn League, which started in 1939, was eliminated and the Pioneer League, founded the same year, lost its affiliated status and became an independent partner league. The Appalachian League was converted to a college summer circuit for rising freshmen and sophomores.

MLB said big league teams will be an average of 200 miles closer to their Triple-A affiliates, allowing most to be within driving distance of their parent team, and that PDL licenses will improve facilities.

Including four partner leagues of teams that are not big league farm teams — the Atlantic League, American Association, Frontier League and Pioneer League — and a pair of showcase leagues of players preparing for the following amateur draft — the Appalachian League and MLB Draft League — MLB’s system for 2021 will have 179 teams in 17 leagues in 43 states. Add in the two spring training complex leagues — the Arizona League and Gulf Coast Leagues — and there will be 209 teams in 19 leagues in 44 states and four provinces.