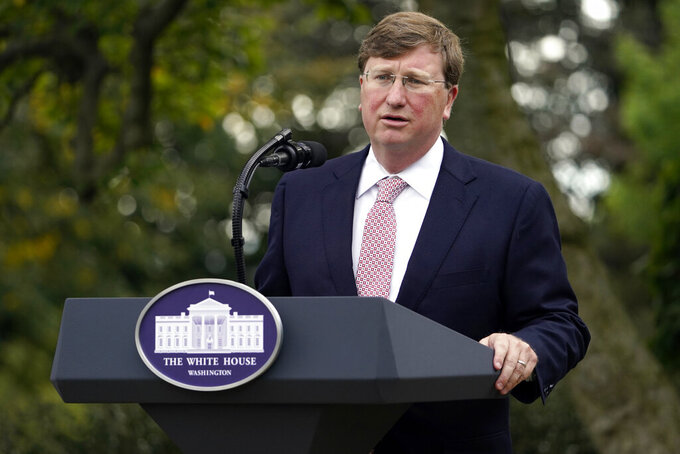 Mississippi Gov. Tate Reeves, speaks during an event with President Donald Trump about coronavirus testing in the Rose Garden of the White House, Monday, Sept. 28, 2020, in Washington. (AP Photo/Evan Vucci)

JACKSON, Miss. (AP) — Mississippi Gov. Tate Reeves ended a statewide mask mandate Wednesday but said he will still require people to wear face coverings in schools to curb the spread of the coronavirus.

“We should not use the heavy hand of government more than it is justified,” Reeves said at a news conference. “We have to tailor our actions to the current threat, and make sure that they do not go beyond what is reasonable.”

Mississippi’s statewide mask mandate has been in place since Aug. 4. Reeves, a Republican, has chosen to extend the mandate several times since then. However, on Wednesday, he said the declining number of confirmed virus cases and hospitalizations are positive developments that call for the lifting of some restrictions.

“We've cut our average number of new cases in half. We've cut our hospitalizations by two-thirds of what they once were," Reeves said. "We know that it was a very turbulent summer, but we have come out on the other side.”

The new executive order ending the statewide mask mandate, effective Wednesday at 5 p.m. and expiring Nov. 11 — after the presidential election — also limits group gatherings where social distancing is not possible to 20 people indoors and 100 people outdoors. These restrictions do not apply to voting precincts, religious entities and schools, according to the order.

In addition to schools, people will still be required to wear face coverings while receiving “close contact personal care services” in such places as salons, barbershops and spas.

Reeves said there will still be restrictions on the number of people who are allowed in restaurants, bars and other businesses. College football games are already happening in Mississippi, and Reeves said people will still be asked to wear masks while attending games. The annual Mississippi State Fair starts next week in Jackson, and masks will be required at that event as well.

The governor said if cases of coronavirus start to rise again, he would consider putting a mask mandate back in place. Cities and towns are welcome to put in place their own mask mandates. Starkville Mayor Lynn Spruill tweeted Wednesday afternoon that Starkville will not lift its requirement for people to wear masks in businesses and public buildings.

“Our requirement was in place prior to the Governor's statewide order and remains in place,” she said. Tupelo and Meridian's mask mandates are also still in effect.

The announcement comes days after a fake letter made to look like it came from Reeves’ office circulated on social media. It announced an end to the mask mandate.

Reeves spokeswoman Renae Eze said Monday that the letter was “absolutely fake.” Those looking for a trusted source on the governor’s pandemic response should stick to the government’s official websites, she said.

The state health department said Wednesday that Mississippi, with a population of about 3 million, has reported more than 98,000 cases and at least 2,969 deaths from COVID-19 as of Tuesday evening. That’s an increase of 552 confirmed cases and 12 deaths from numbers reported the day before, with 10 occurring between Sept. 18 and Sept. 29 and recorded later using death certificates.