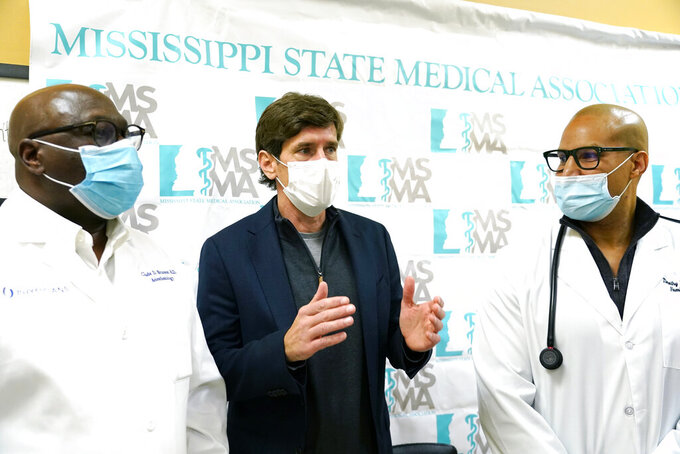 JACKSON, Miss. (AP) — Mississippi Gov. Tate Reeves expanded his mask mandate to 78 out of 82 counties on Tuesday as the state surpassed its previous record for the highest ever number of coronavirus deaths reported in a single day.

State Health Officer Dr. Thomas Dobbs said the state is on track to surpass 1,000 deaths in the month of December alone. Close to 4,500 people with the coronavirus have died in Mississippi since the start of the pandemic, according to the state Department of Health.

“We’re all going to suffer,” Dobbs said during a virtual briefing Tuesday. “I think more and more people are seeing the impact on our families from personal experience.”

A record 79 deaths were reported Tuesday in Mississippi, representing data compiled in the state as of Monday evening. Fifty-six of the people died at different times within the last 10 days and were identified as coronavirus-related fatalities later using death certificates, according to the Department of Health.

After the numbers were released, Reeves announced he was expanding his mask mandate to almost all of Mississippi's 82 counties. Reeves last expanded his mask mandate on Dec. 10 to 61 counties. The only counties currently not under a mask mandate are Claiborne, Issaquena, Sharkey and Tunica.

The Republican governor said he has been putting counties with the most new cases of the highly contagious virus under the mandate.

In a statement announcing the new restrictions, Reeves encouraged families to wear masks and remain socially distant while celebrating the holiday this week.

“We all need to be extra aware. You know what to do! Protect yourself and your family," Reeves said.

Dobbs, the state's top health official, said he could not release the names of the 79 dead because of privacy laws. But he took a moment at the start Tuesday's briefing to honor some of those who died. He listed individuals by age, sex and race: A Black woman in her late 30s, an 84-year-old white man and a 52-year-old Black man among them.

Health officials are seeing the fastest growth of new cases in individuals ages 25 to 39, but more than 70% of deaths are in individuals over the age of 65, Byers said.

Dobbs pleaded with residents to avoid social gatherings with friends and extended family for Christmas. He warned specifically about gatherings with people from a mix of different ages.

The physician said he's been discouraged to see the amount of misinformation circulating on social media about the virus and virus-related deaths. Some people have accused the health department of falsifying data to make the virus look more deadly than it really is, something Dobbs said is categorically untrue.

Mississippi is reporting about 6,000 more deaths in the state this year than last year, Dobbs said.

“These are real deaths. This isn’t some artifact of someone calling a death something else," he said. "Here my lips speak this: People are dying from COVID. COVID is killing Mississippians. COVID is one of the leading causes of death in Mississippi.”