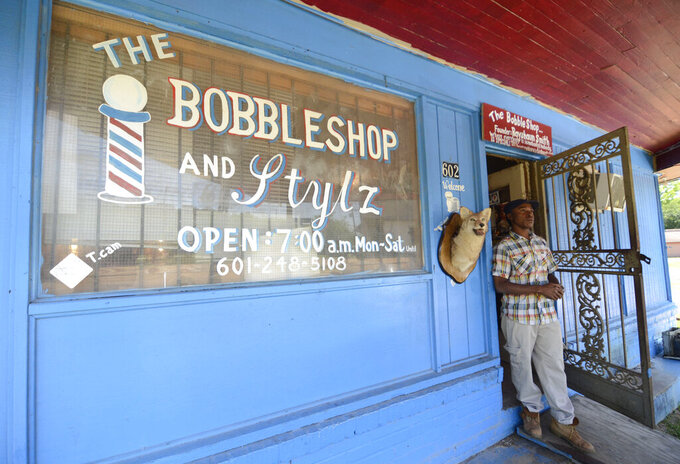 Barber Rayshaun Smith is pictured outside The Bobbleshop & Stylz barber shop in McComb, Miss., on Monday, May 11, 2020, as barbershops and salons reopened in the state. (Matt Williamson/Enterprise-Journal via AP) 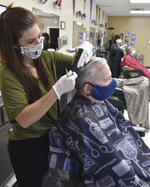 JACKSON, Miss. (AP) — Mississippi barbershops, beauty salons and gyms were starting to reopen Monday for the first time in weeks, with limits on the numbers of customers and other restrictions designed to slow the spread of the new coronavirus.

Tanisha Davis, a hair stylist with Platinum Cuts and Styles in Vicksburg, said Monday that the shop has been closed since March 23 and the weeks without work were “very tough.” She spent part of Monday deep-cleaning the shop and preparing to reopen Tuesday, with appointments lined up for days.

She said that will be greatly reduced after reopening because she can't cut one customer's hair while another waits for a chemical treatment to set, for example. She said she understands the need for regulations.

Republican Gov. Tate Reeves has been gradually easing business restrictions that have been in place the past few weeks. Restaurants in most parts of the state have been allowed to reopen their dining rooms and patios since Thursday, after being limited to carryout and delivery for more than a month. Some cities have kept tighter restrictions, and Reeves said that is allowed.

The governor's “safer at home” order remains in place until May 25. It says people who are medically vulnerable should stay home. It suggests that people work from home, if possible, and maintain distance from others when they go out. It also limits the size of gatherings to 20 or fewer people.

Reeves on Monday signed a new executive order dealing with unemployment benefits. Under normal circumstances, people must be without work for a week before they become eligible to collect benefits. In March, Reeves signed an order waiving the one-week waiting period, and that waiver was supposed to remain in place until June 27. The order he signed Monday extends it until Dec. 26.

During a news conference Monday, Reeves encouraged employees to return to work as businesses reopen. He said exceptions can be made for people who are older or are medically vulnerable.

“There's really no government replacement for a job,” Reeves said.

White House officials told governors during a conference call Monday that states should try to test all nursing home residents and employees for the virus in the next two weeks. Reeves said during his news conference that there's no timeline to meet that goal in Mississippi.

“We have started the conversation, and I think what you'll see is us develop a plan to accomplish that in the shortest time period possible," Reeves said.

The state Health Department said Monday that Mississippi — with a population of about 3 million — had at least 9,674 confirmed cases and 435 deaths from the coronavirus as of Sunday evening. That was an increase of 173 cases and five deaths from numbers the department reported the previous day.

The number of coronavirus infections is thought to be far higher because many people have not been tested, and studies suggest people can be infected with the virus without feeling sick. For most people, the coronavirus causes mild or moderate symptoms, such as fever and cough. For others, especially older adults and people with existing health problems, the virus can cause severe symptoms and be fatal.

The Health Department said Monday that at least 95,885 coronavirus tests had been done in Mississippi as of Sunday. The department said at least 1,223 cases of the virus had been confirmed in long-term care facilities such as nursing homes, with at least 193 deaths from it in those facilities.

“To protect the identities and the privacy of the residents, and also to prevent stigmatization of different facilities, it's always been our stance not to release long-term care stuff,” Dobbs said.