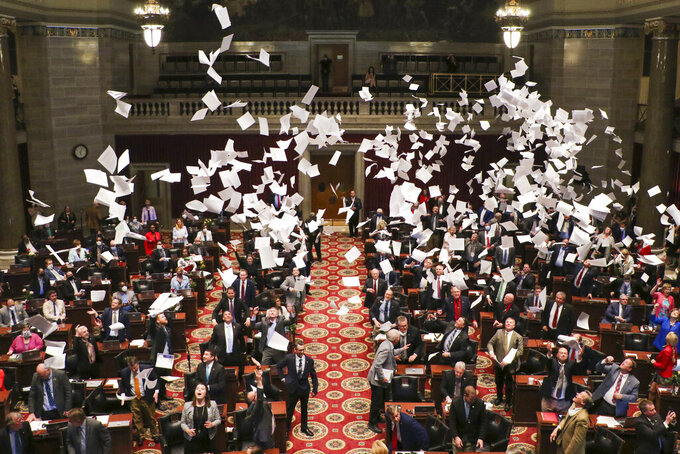 Members of the Missouri House of Representatives end the final day of the regular legislative session with a toss up of papers on Friday, May 15, 2020 at the Missouri State Capitol in Jefferson City, Mo. The House stands adjourned until May 27, when it will hold a tech session lasting until May 30, according to the House's website message board. (Liv Paggiarino/The Jefferson City News-Tribune via AP)

JEFFERSON CITY, Mo. (AP) — Missouri lawmakers wrapped up their work Friday by passing bills allowing people to vote by mail because of the coronavirus and ramping up criminal penalties in response to an uptick in violent crime in the state's biggest cities.

Legislators signed off on the special voting provisions for the 2020 elections shortly before their deadline to pass bills in an unusual session that was interrupted for several weeks because of concerns about the virus that causes COVID-19.

Voters currently can request absentee ballots only if they provide an excuse for why they can’t vote in person. Illness is one option, but the law isn’t explicit on whether the illness excuse covers healthy voters concerned about catching or spreading COVID-19.

Under the bill sent to Republican Gov. Mike Parson, people considered at-risk of the coronavirus — those age 65 and older, living in a long-term care facility or with certain existing health problems — could vote absentee without needing to have their ballot notarized. Anyone else could cast a mail-in ballot but would need to get it notarized.

The bill passed with bipartisan support but received mixed reviews from both parties. Republicans said it doesn't include enough restrictions to ensure election security, and Democrats said it has too many rules.

“When you are not wanting to go to the polls because you are either ill or fearful of becoming ill, but then you have to go get a notary to be able to not go to the polls, it doesn't really fix the problem,” House Democratic Minority Leader Crystal Quade said.

Republican Secretary of State Jay Ashcroft on Friday said he no longer supported the measure after lawmakers stripped a contested photo ID requirement out of it.

Lawmakers returned to the Capitol to work on the state budget and other policies days before Parson lifted his statewide stay-at-home order in early May.

Members of the public were allowed in the Capitol to watch debate but were encouraged to stay home, prompting concern from some lawmakers about lack of public involvement in crafting major policy changes. Both lawmakers and visitors were quizzed on their health and had their temperatures checked before they could enter the building.

“The work that we did here today I think was important enough that legislators made the decision that they were going to go ahead and come to the building to do work,” Republican House Speaker Elijah Haahr said. “We understand the risks involved.”

Few lawmakers wore masks in the final days of session, and legislators frequently sat close to one another to vote.

Lawmakers also faced pressure to act on crime legislation following a bloody 2019 and a violent start to 2020. The deaths of two men on Tuesday night were Kansas City's 63rd and 64th homicides this year. St. Louis police reported 53 homicides as of Friday.

A bill headed to Parson's desk would create the crime of vehicle hijacking, expand the number of crimes that are considered dangerous felonies, ban probation for some crimes, and broaden what's considered a criminal street gang, along with increased penalties for taking part in gang activities.

“This is going to help get the most violent habitual offenders off of the streets,” Republican Rep. Nick Schroer said.

The bill sparked outrage from House lawmakers who said it could reverse a drop in the state's prison population following a bipartisan push for criminal justice reform in recent years.

Republican skeptics in the Senate expressed no interest in compromising on the House-backed bill Friday after a feud between the two GOP-led chambers.

At issue was a House provision that could thwart efforts to build a wind-energy power line that was slipped onto another Senate bill without senators noticing. Senators on Thursday hurriedly revoked a bill they had just passed, a highly unusual move, when they caught the amendment.

Few bills made it across the finish line during lawmaker's roughly five month session, about 50 compared to more than 90 last year.

The Republican-led Legislature this week did succeed in sending a new redistricting plan to the ballot that will ask voters to undo key parts of another redistricting measure they passed less than two years ago. Supporters wanted to accomplish the move this year because new state House and Senate districts will be drawn in 2021.

Associated Press writer David A. Lieb contributed to this report.