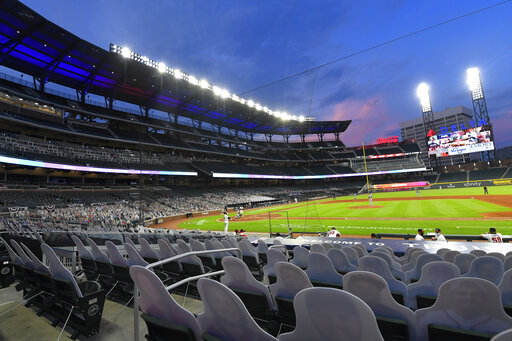 FILE - Cardboard cutouts of fans in the otherwise empty seats face the field during the sixth inning of a baseball game between the Atlanta Braves and Tampa Bay Rays in Atlanta, in this Thursday, July 30, 2020, file photo. Georgia’s new voting law _ which critics claim severely limits access to the ballot box, especially for people of color _ has prompted calls from as high as the White House to consider moving the midsummer classic out of Atlanta. The game is set for July 13 at Truist Park, the Braves’ 41,000-seat stadium in suburban Cobb County.(AP Photo/John Amis, File)

NEW YORK (AP) — Atlanta lost Major League Baseball’s summer All-Star Game on Friday over the league’s objections to sweeping changes to Georgia voting laws that critics — including the CEOs of Atlanta-based Delta Air Lines and Coca-Cola — have condemned as being too restrictive.

The decision to pull the July 13 game from Atlanta’s Truist Park amounts to the first economic backlash against Georgia for the voting law that Republican Gov. Brian Kemp quickly signed into law March 25.

Kemp has insisted the law’s critics have mischaracterized what it does, yet GOP lawmakers adopted the changes largely in response to false claims of fraud in the 2020 elections by former President Donald Trump and his supporters. The law includes new restrictions on voting by mail and greater legislative control over how elections are run.

MLB Commissioner Rob Manfred made the decision to move the All-Star events and the amateur draft from Atlanta after discussions with individual players and the Players Alliance, an organization of Black players formed after the death of George Floyd last year, the commissioner said in a statement. A new ballpark for the events wasn’t immediately revealed.

Manfred said he also spoke with the Major League Baseball Players Association, which at the time of the commissioner's decision said it had still not taken a stance.

“I have decided that the best way to demonstrate our values as a sport is by relocating this year’s All-Star Game and MLB draft,” Manfred said. “Major League Baseball fundamentally supports voting rights for all Americans and opposes restrictions to the ballot box.”

“The President has made his concerns about the bill passed in Georgia clear, given its extreme provisions that impact the ability of so many citizens to cast their votes," the White House said. "He said earlier this week that if the decision was made by Major League Baseball to move the All-Star game, he would certainly support that decision – and now that MLB has made that choice, he certainly does.”

In a statement, Trump blasted the move and urged his supporters to “boycott baseball and all of the woke companies that are interfering with Free and Fair Elections.”

Kemp called MLB's action a “knee-jerk decision” that means “cancel culture and woke political activists are coming for every aspect of your life, sports included. If the left doesn’t agree with you, facts and the truth do not matter.”

“This attack on our state is the direct result of repeated lies from (President) Joe Biden and Stacey Abrams about a bill that expands access to the ballot box and ensures the integrity of our elections," Kemp said in a statement, referring to the Democratic candidate whom he narrowly defeated in the 2018 election. "I will not back down. Georgians will not be bullied.”

Georgia state House Speaker David Ralston, a powerful Republican, vowed to stand behind the new law, which adds strict identification requirements for voting absentee by mail, limits the use of ballot drop boxes and makes it a crime to hand out food or water to voters waiting in line, among many other provisions.

Georgia Republicans say changes were needed to maintain voter confidence in the election system. Democrats and voting rights groups say the law will disproportionately affect communities of color. On Wednesday, two of Georgia's most prominent business leaders sided with the law's opponents.

The Atlanta Braves issued a statement Friday saying the team is disappointed by Manfred's decision.

“We are saddened that fans will not be able to see this event in our city,” the team said. “The Braves organization will continue to stress the importance of equal voting opportunities and we had hoped our city could use this event as a platform to enhance the discussion."

Los Angeles Dodgers manager Dave Roberts, who is to guide the National League All-Star team, applauded MLB for moving the game from Georgia.

“I think in a world now where people want and need to be heard — and in this particular case, people of color — for Major League Baseball to listen and do something about it, to be proactive, it sets a tone,” said Roberts, the son of a Black father and Japanese mother.

Abrams, who has championed voting rights since her loss to Kemp, blasted the new voting law. The Democrat is being closely watched to see if she seeks a rematch against Kemp in 2022.

“Georgia Republicans must renounce the terrible damage they have caused to our voting system and the harm they have inflicted on our economy,” Abrams said.

Atlanta Mayor Keisha Lance Bottoms, a Democrat, said she supports MLB's decision. Atlanta will no doubt share in the economic loss, though the Braves' home stadium is now located outside the city, in suburban Cobb County.

“Unfortunately, the removal of the MLB All-Star Game from Georgia is likely the first of many dominoes to fall until the unnecessary barriers put in place to restrict access to the ballot box are removed,” Bottoms said in a statement.

Some Democrats from the Georgia county where the game was to be held said they oppose MLB's move. Lisa Cupid, the Black chairwoman of the Cobb County Commission, said she urged the league to stay rather than harm hotels and other businesses still reeling from the coronavirus pandemic.

State Rep. Teri Anulewicz, a Democrat whose district includes the stadium, added: “I don’t know who Major League Baseball feels they are punishing. The governor, from his statement, has made clear he doesn’t feel he is being punished.”

The relocation of high-profile sports events from cities in response to social issues has a long history in the U.S.

The NFL originally awarded the 1993 Super Bowl to Sun Devil Stadium in Tempe, Arizona, but decided in March 1991 to move it to Pasadena, California, after the state failed to make Martin Luther King Jr. Day an official holiday. Arizona became the last state to adopt an MLK Holiday when voters approved it in November 1992.

The NBA first scheduled its 2017 All-Star Game at the Spectrum Center in Charlotte, North Carolina, then shifted it in July 2016 because of its objections to a North Carolina law that limited anti-discrimination protections for LGBTQ people. The law was partially repealed in 2017, and the 2019 All-Star Game was held in Charlotte.

Manfred said despite the change of venue, MLB still plans to use the All-Star Game this year to honor Hank Aaron, the Braves’ Hall of Famer and former career home run champion who died on Jan. 22 at age 86.

Houston Astros manager Dusty Baker, a former teammate of Aaron's, applauded the move and said the late outfielder "always had the rights of the people in the forefront of his mind and in his heart.”

“This is what Hank would have liked, even if it was his town,” Baker told reporters.