MLB returns ball kids to lines after feedback from clubs 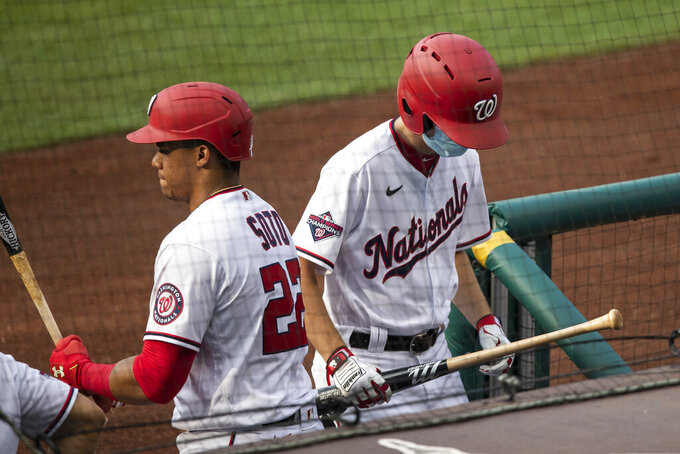 A bat boy walks into the dugout with a bat, past Washington Nationals' Juan Soto (22) during the first inning of an exhibition baseball game against the Baltimore Orioles at Nationals Park, Tuesday, July 21, 2020, in Washington. (AP Photo/Alex Brandon)

CHICAGO (AP) — It looks as if Christian Yelich is going to get some help. Same for Aaron Judge and the rest of baseball's corner outfielders.

Major League Baseball has adjusted its policy for bat-and-ball kids this summer, clearing the way for ball boys and girls to return to the foul lines during games. It recently informed clubs of the change, along with a set of detailed guidelines covering what they are allowed to do at the ballpark.

Baseball had planned to play without bat-and-ball kids this summer because of the coronavirus pandemic. Depending on how teams decided to handle the situation, that might have led to a little more physical activity for corner outfielders running over to get a foul ball off the field.

Not so much anymore. Take it easy, Mookie Betts. You, too, Juan Soto.

“There’s some ballparks where there’s a lot of foul territory, so I think it has a bigger impact in some places than others," Milwaukee Brewers slugger Ryan Braun said Wednesday. “The biggest thing I take away from it is just I think for all of us, we’re grateful when MLB makes adjustments when there are things that we give them feedback on.”

While ball boys and girls are returning to the foul lines, baseball is staying with its plans to keep them out of the dugout area — covered in Section 5.2 in baseball’s operations manual for the 2020 season.

The last paragraph of Section 5.2 reads: “The duties normally handled by bat boys/girls and ball boys/girls will be performed by existing Club staff and not by any minor person. If no staff is available to perform those roles, the functions will not be available for the game; provided, however, that Clubs must make staff available to provide umpires with new balls and to retrieve equipment discarded by a batter who reaches base.”

The ball boys and girls on the foul lines will wear masks and gloves. They are required to stay at least 20 feet away from players, coaches, umpires and staff members. They aren't allowed to play catch with any on-field personnel.

The ball boys and girls are expected to place anything they touch into a club-supplied bucket or bag, which will be disinfected by a clubhouse worker after the game.

As baseball started ramping up for opening day this week, everything was being worked out.

“I guess it goes under the fact that, hey, it’s a different year — we’re worried about who is taking the balls out to the umpire,” Miami Marlins manager Don Mattingly said. “Somebody has got to pick it up, right? I think there has been a designated person to get equipment, because you don’t want a bunch of different people touching it, or players touching it, and not sharing resin or pine tar and all that stuff. There are lots of protocols with that.”

Mattingly’s players might help him figure it out. Left-hander Adam Conley said he thinks the team will have some fun with covering the responsibilities around the plate.

“I don’t want to give the guys any ideas, but I’m sure there will be contests and things like that, where if you lose you’ve got to do it — things like that,” Conley said. “We’ll come up with something I’m sure.”

Yasmani Grandal, a veteran catcher who agreed to a $73 million, four-year contract with the Chicago White Sox in November, made it sound as if his new team might follow a similar course. He also thinks it might be a popular role at various points during the shortened 60-game season.

“I’m sure we’re going to have our own bat boy, which will be one of the players. I can tell you that much,” Grandal said. “Don’t know who it will be right now, but you never know, maybe it becomes one of those things that whoever’s the bat boy that day, the next day, he comes out and crushes. So everybody is going to want to do it.”