MLB's testing sweep brings some success but optics are issue 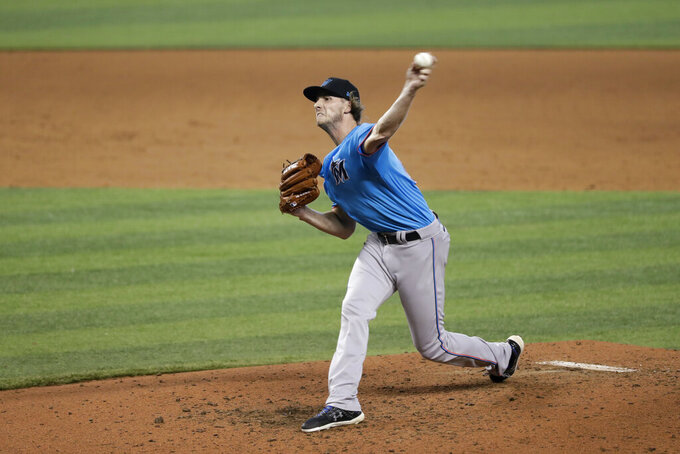 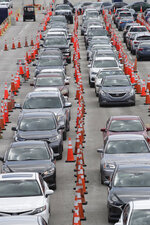 PHOENIX (AP) — Major League Baseball's COVID-19 testing sweep appears to be having some success even as large swaths of the United States continue to struggle with containing the fast-spreading virus.

MLB and the players' union released statistics Friday saying six of 10,548 samples were new positives in the week ending Thursday, a rate of 0.05%. In addition to five players, one staff member tested positive.

That's fairly good news for a sport that's trying to begin its abbreviated 60-game schedule next week. But players and coaches are also aware that the optics of baseball's relative testing success — especially in hard-hit states like Arizona, California, Texas and Florida — might not be ideal considering demand for tests has sometimes been higher than the supply for the average person.

“If they’ve deemed that players being tested is necessary to provide jobs, opportunity, entertainment, TV, all that’s going on -- if they think that’s really valuable -- then they’ve weighed it’s important for us to be tested this often for the season to happen,” Marlins pitcher Adam Conley said. “But it makes me sad if someone is desiring or needing to be tested and doesn’t have the means to get that. It’s heartbreaking.”

MLB is trying to ensure its nearly 10,000 weekly tests don’t strain public resources by using private facilities. The avalanche of tests has allowed the sport to keep on top of potential outbreaks.

Dr. Amesh Adalja, senior scholar at the Johns Hopkins Center for Health Security, said it was possible baseball’s rigorous testing could create conflicts over resources in test-strapped regions, but he also thinks MLB’s investment might spur much-needed innovation and boost production in testing.

“The solution here is really to make sure that we expand testing,” Adalja told The Associated Press. “And maybe because MLB will be putting resources into trying to buy all these tests, that might actually be a way to expand capacity. I don’t know if that’s going to happen or not, but we want to be in a place where testing can be done as quickly and as easily as possible for all purposes.”

MLB's approach to its return has been different than the NBA and NHL, which both opted for a bubble-like atmosphere in hub cities. The NBA has 22 teams in Orlando, Florida, while the NHL's teams will play in either Toronto and Edmonton.

Baseball's 30 teams are all planning to play in their home markets, meaning there will be much more travel for all involved. Teams have spent the past few weeks in one place but will start traveling for exhibition games soon.

The Arizona Diamondbacks leave on Sunday for two exhibition games in Los Angeles against the Dodgers.

“This first trip to LA is going to be new for everyone,” Diamondbacks closer Archie Bradley said. “From the check-ins to the hotels to the way we travel, eat and prepare. So I think the first two days of travel are going to be a very big orientation of what the season's going to look like and how we're going to handle not going out to eat, not going to the mall, not going out to restaurants after games.”

Polanco and Puig were the latest two big-name players to test positive for the virus.

The 28-year-old Polanco is a key part to the Pirates lineup, especially after they traded Starling Marte to the Diamondbacks during the offseason. He battled injuries last season and hit .242 in 42 games.

Puig recently was near a one-year agreement with the Atlanta Braves that was contingent on him passing a physical. The 29-year-old posted a statement on social media on Friday saying he had the virus.

Puig said he is asymptomatic and feels “absolutely fine.”

Two All-Stars from last season — LeMahieu and Freeman — are among those who returned to the field after missing time due to COVID-19.

The 32-year-old LeMahieu signed with the Yankees before the 2019 season and hit .327. He set career highs with 26 homers and 102 RBIs while splitting time among first, second and third. Manager Aaron Boone wants LeMahieu to build up his legs and said it’s not clear whether he will be ready for Thursday night’s opener at Washington.

Freeman and pitcher Touki Toussaint — who also previously tested positive for the virus — worked out at Truist Park on Friday. Freeman appeared to be fit in video posted on the Braves Twitter account. He took swings in the cage and worked out in the field and could have time to prepare for the team’s opener at the Mets on Friday.

Royals pitcher Brad Keller also returned following a pair of negative tests. He immediately hit the field for a 30-pitch bullpen session and had no issues. The Athletics received good news when 22-year-old pitcher Jesus Luzardo returned to camp. He's expected to begin the season out of the bullpen.

New Yankees ace Gerrit Cole gave up consecutive home runs to Mike Ford and Miguel Andújar in an intrasquad game that served as the final tuneup for his New York debut.

The two runs in the fourth inning were the only ones he allowed over 5 2/3 innings on Friday. He struck out seven, walked none and hit a batter, throwing 87 pitches.

Next up: A pandemic-delayed major league season opener at the World Series champion Washington Nationals on Thursday night in a matchup against Max Scherzer,

Germán posted himself in a Yankees uniform exclaiming in what appears to be a photo of him pitching in a game. The post included Spanish words that translated to: “Everyone makes history on both sides, I think I did mine at Yankee Stadium, if decide not to come back I will proud of my effort during in a 11-year career. God bless everyone who has supported me”

A right-hander who turns 28 on Aug. 4, Germán — 18-4 last season — has 63 games left to serve in his suspension for violating Major League Baseball’s domestic violence policy. The regular-season is limited to 60 games this year because of the coronavirus pandemic.

Daniel Bard has made the Colorado Rockies roster after not pitching in the big leagues since 2013.

The 34-year-old has been through a half dozen comeback attempts since his last appearance with the Boston Red Sox seven years ago, but he couldn’t rediscover his control and finally became a player mentor and mental skills coach for the Arizona Diamondbacks.

His role with the D-backs included offering advice, but he'd also shag fly balls and play catch during warm-ups. Soon, players began telling him his throws were pretty nasty and wondered why he wasn’t on a big league mound himself.

Black informed Bard on Friday that he’d made the roster.

“It’s going to be a great story when he comes back and pitches well,” Black said. “We’re optimistic about that.”

The Rockies shook up their bullpen on Friday, releasing veterans Jake McGee and Bryan Shaw.

The Chicago Cubs added veteran infielder Jason Kipnis to their 40-man roster. He'll get a prorated $370,370 salary from his original $1 million deal.

Red Sox left-hander Eduardo Rodriguez is making progress toward working out with the team according to manager Ron Roenicke.

Rodriguez was expected to be the team's opening day starter before testing positive for COVID-19. The Red Sox are scheduled to open the season on July 24 against the Baltimore Orioles. If Rodríguez is unavailable, the first game could fall to Nathan Eovaldi.

Anderson went 3-0 with a 5.55 ERA in 54 appearances last season for the Angels, who drafted him in the 14th round in 2014. He has five saves in his two big league seasons.

The Milwaukee Brewers say right-hander Brandon Woodruff will be the team's opening day starter against the Chicago Cubs next Friday. He had an 11-3 record with a 3.62 ERA in 22 starts last season.

The Pirates said Joe Musgrove will start their opener at St. Louis on July 24. The Twins will start All-Star José Berríos against the White Sox in Chicago.