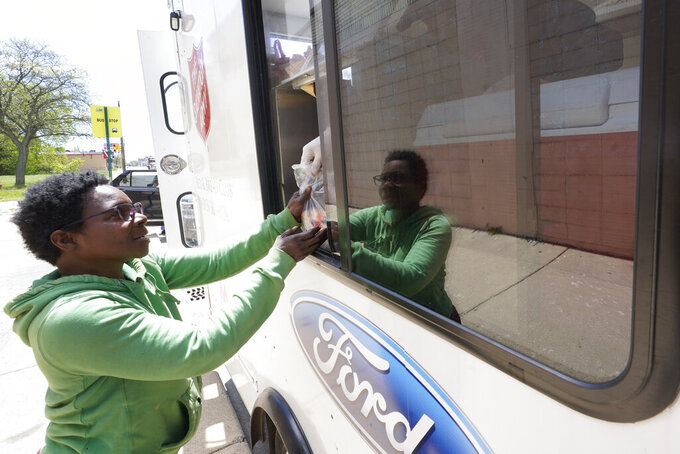 A passerby stops for a bagged meal at a Salvation Army Bed & Bread truck in Detroit, Wednesday, May 12, 2021. In three weeks, more than 40 people have received vaccinations through the program to reach people who normally have little to no access to churches, community centers or other places where vaccines are being given. Mobile care teams consisting of two nurses and a peer support specialist accompany The Salvation Army's Bed & Bread trucks as they cruise Detroit, which lags far behind the state and nearby communities in percentage of people vaccinated. (AP Photo/Paul Sancya)

DETROIT (AP) — Keenon Carreker walked up to the Salvation Army mobile soup kitchen parked in one of the poorest areas of Detroit for the big hot dogs that came inside bags of food passed out to the city’s needy.

He left with a meal and his first dose of the Moderna COVID-19 vaccine. “It helped being right here in my neighborhood,” said Carreker, 52, who otherwise was in no hurry to get vaccinated.

Five people received vaccine doses Wednesday, bringing the total to 45 doses given over the past four weeks through the program designed to reach those who have little to no access to churches, community centers or other places where vaccines are being given.

Mobile care teams consisting of nurses and a peer support specialist accompany the Bed & Bread trucks as they cruise Detroit, which lags far behind the state and nearby communities in the percentage of people vaccinated.

Only about 33% of Detroit residents ages 16 and older have been vaccinated compared to more than half statewide. To reduce that gap, Detroit's health department also is going door-to-door to encourage residents to get vaccinated at sites near their homes. In some other U.S. cities, in-home vaccinations are being offered.

“The timing and the need could not be greater,” said Jamie Winkler, The Salvation Army’s Eastern Michigan Harbor Light System executive director.

More than 49,300 virus cases have been confirmed in Detroit and 2,100 people have died since the start of the coronavirus pandemic in March 2020.

Across Michigan, more than 869,500 COVID-19 infections have been confirmed and more than 18,300 people have died from the disease.

The Salvation Army Detroit Harbor Light center is working with Central City Integrated Health and Michigan’s Department of Health and Human Services to take vaccines to those most in need. Second doses will be available when the trucks return to the neighborhoods. People who can’t make it to the trucks can receive the vaccine at a Central City Integrated Health facility.

Like Carreker, Kenneth West waited for the Bed & Bread truck to get food. He got it, in addition to his first dose of the Moderna vaccine.

But at the truck's next stop, Apolonio Mata was waiting specifically for the vaccine. Mata's doctor already had urged him to get vaccinated and a friend told him the shot would be available Wednesday afternoon outside the building where he lives.

Mata, 52, said it helps to take the vaccine to some people.

“They're not scared (of getting vaccinated),” he said. “A majority of people who live in this building don't have transportation.”

lillye Neal, a registered nurse with Central City Integrated Health, said the mobile care teams that follow The Salvation Army trucks have met with some hesitancy when approaching people, especially the homeless, about vaccinations.

“Generally, when you find groups of homeless people, when the main person says ‘no, we don’t take the vaccine,' everyone seems to follow suit,” Neal said. “But then we're running across those people who are appreciative that we're out here because they don't have transportation. They don't have a way to get to the vaccine.”