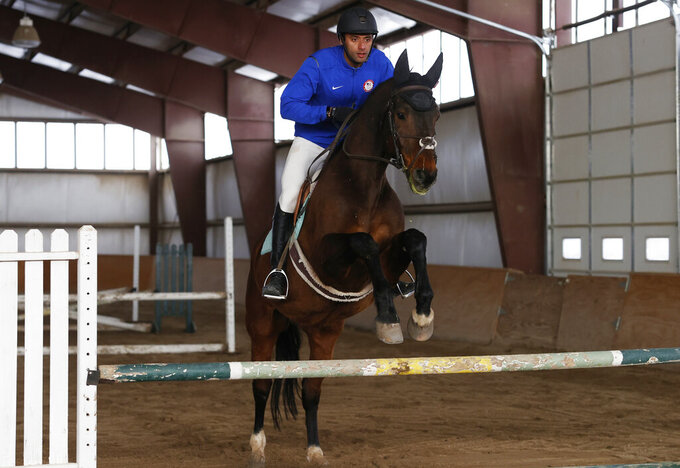 Together, soldier-athletes Amro Elgeziry and Isabella Isaksen are a married Olympic modern pentathlon couple trying to navigate their way through the challenges of training for the Tokyo Games during the coronavirus pandemic.

Their sport consists of five disciplines, two of which they can't practice at the moment -- equestrian horse jumping (their stable recently closed) and swimming (pools remain shut).

For the rest, they improvise. They hone their fencing footwork in their Colorado Springs, Colorado, backyard, shoot laser pistols at a target in a nearby park (yes, they sometimes draw stares) and take to the trails for morning runs.

Elgeziry is already qualified for his fourth Olympics — with the Tokyo Games in 2021 set to be his first as a member of Team USA (he became a citizen in 2017). The 33-year-old was born in Cairo and competed at the last three Olympics for Egypt.

The 26-year-old Isaksen is attempting to secure her spot through world rankings or at the world championships in Minsk, Belarus, in June 2021.

It was certainly a family affair at the 2016 Rio de Janeiro Games. They both made it, along with their siblings. Isaksen’s older sister, Margaux, qualified for her third Olympic Games. Elgeziry’s brother, Omar, who now serves as their coach, also made the Egyptian squad.

After Rio, Elgeziry and Isaksen were each unsure about how much longer they wanted to remain in the sport. It was a financial challenge, illustrated by Isaksen working at Dick's Sporting Goods until two weeks before the Rio Games began.

“But we both decided we still have a lot to accomplish in the sport,” Isaksen said.

They joined the Army months apart in 2017. Both were selected to be members of the World Class Athlete Program, which allows top-ranked soldier-athletes to perform at the international level while also serving their nation in the military.

Isaksen is a sergeant and a member of 13 Mike, which supports infantry and tank units by supplementing cannon artillery during combat.

Elgeziry also is a sergeant and a member of 92 Yankee, whose duties involve general upkeep of all Army equipment.

They're stationed out of Fort Carson and before the outbreak of COVID-19 split their time between training at the base — along with performing their military tasks — and the U.S. Olympic & Paralympic Training Center.

“Even if we’re training less on the sports side, we’ve got to stay ready on the Army side of things,” said Isaksen, who grew up in Fayetteville, Arkansas, as a runner before she followed her sister into modern pentathlon. “But with five sports to train for, we’re kind of used to it.”

On most days, they begin the morning with a distance run along the neighboring trails.

After that, the routine really does vary. There's a lot of training ground to cover since modern pentathlon competitions consist of fencing, freestyle swimming (200 meters), equestrian show jumping, and a final event combining laser-pistol shooting and cross-country running (four 800-meter laps with five shots after each lap).

They have their fencing equipment at home so they head into their backyard to work on technique — over and over.

“It gets boring,” joked Elgeziry, who was a swimmer growing up before being lured into the sport by an older brother, Emad, who competed at the 2000 Games.

Sometimes, they practice laser-pistol shooting in their backyard. Other times, they head to a local park, where the couple can more closely simulate race conditions. They set up a stand to hold their laser pistols and position a target about 10 meters away. They'll run a loop before returning to shoot at the target.

Their drills used to draw stares but, “the people in the park are used to us now,” Isaksen said.

Staying in swimming shape with no pools open has proven to be an obstacle. They go through dry-land workouts made up of core and strength exercises using a medicine ball and bands.

As for equestrian practice, they were riding at their coach’s stable until recently when it was shut down to comply with local ordinances.

They've added another event to their crowded plate — baking. The house specialties are sourdough bread and a pasta dish with broccoli.

“We do love to cook,” Elgeziry said.