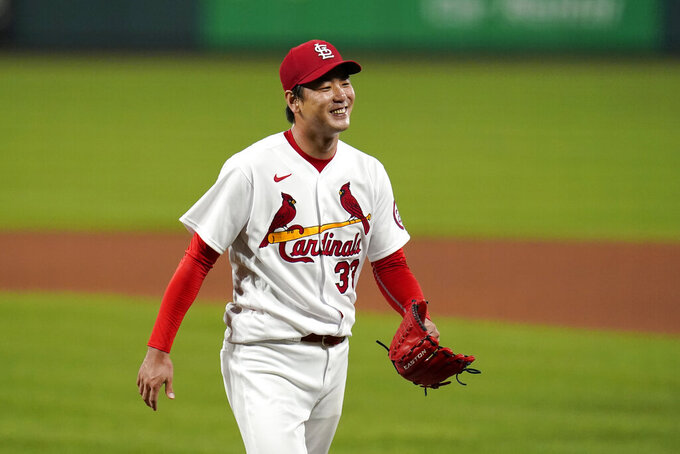 St. Louis Cardinals starting pitcher Kwang-Hyun Kim smiles as he walks off the field after getting Milwaukee Brewers' Ryan Braun to fly out ending the top of the fifth inning of a baseball game Thursday, Sept. 24, 2020, in St. Louis. (AP Photo/Jeff Roberson)

ST. LOUIS (AP) — Despite having no fans to witness his career milestone, Yadier Molina's teammates managed to make it special for him anyway.

Milwaukee (27-29) missed a chance to move up in the wild-card standings. The Brewers and Cardinals play four more times this weekend, including a doubleheader Friday.

“Me and Goldy (Paul Goldschmidt) were talking before the game that this is probably one of the biggest games we've missed not having a crowd,” St. Louis manager Mike Shildt said. “You know what that crowd would have been like tonight and this weekend. Yadi missed it tonight.”

But his teammates didn't let him down.

“We gave him a standing ovation," Shildt said. "It was just a fun moment. A moment where you pause and honor a great accomplishment for a great player. The bullpen did the same thing. So, he got a little bit of the tip of the cap. It was a nice moment.”

In his 17th season, the 38-year-old star catcher was happy with his achievement but he kept the big picture in mind.

“It was great but we got the win as a team and that's important,” Molina said. “In that moment, it was great from a personal standpoint. It's been many years. You want to get to that point and it's finally here so you want to enjoy it.”

St. Louis starter Kwang Hyun Kim (3-0) went five innings to pick up the win. He allowed five hits and just one run in his seventh career start. Andrew Miller got the final two outs — both on strikeouts — to record his fourth save.

Corbin Burnes (4-1), who began the day with a 1.77 ERA, left the game with lower back discomfort in the fourth inning. He pitched 3 2/3 innings, allowing three runs and six hits.

“Coming down the stretch like this, knowing how close we are to the postseason, it’s tough to go out there and not get through four innings,” Burnes said, "and to make it tough on the bullpen really for the rest of this weekend."

Molina singled in the second inning and again in the seventh, and became the 12th catcher in major league history to reach the 2,000-hit mark.

Carlson, the No. 1 St. Louis prospect, gave the Cardinals a 3-1 lead with a two-run homer in the fourth after Dexter Fowler drew a one-out walk.

The scenario almost repeated itself in the sixth. Fowler walked and Carlson just missed a homer, doubling off the wall in left.

“Dex put together some real professional at-bats up there and it allowed me to go up there and hit freely,” Carlson said. “There's a lot of veterans in the clubhouse that are helping me out and giving me confidence. It really makes a difference."

The switch-hitting Carlson reached the majors as the Cardinals returned from a COVID-19 quarantine in August. he outfielder was hitting .169 when he was sent to the alternate training site Sept. 15.

St. Louis took a 1-0 lead in the third on a single by Goldschmidt.

The Brewers scored in the fourth on a two-out, RBI single by Tyrone Taylor and added a run in the ninth on a single by pinch-hitter Eric Sogard, who said the club will put this loss in the rear view mirror.

““It’ll be easy to get back up tomorrow. That’s for sure,” Sogard said. "We know everything now is do or die. If we don’t go hard, our season will be over in three days.”

Milwaukee placed RHP Freddy Peralta (3-1, 3.29) on the paternity list. Peralta and his wife are awaiting the birth of their first child. The reliever has 44 strikeouts in 27 1/3 innings. To replace Peralta, the Brewers recalled LHP Eric Lauer.

Brewers: Ryan Braun, who got a day off Wednesday for a sore back, was back in the lineup Thursday. He was the DH and hit second.

Cardinals: RHP Carlos Martinez (left oblique strain) was put on the injured list. He departed Wednesday’s game in Kansas City with two runners on and nobody out in the sixth. The right-hander is not likely to pitch again in 2020 even if the Cardinals make a deep run in the playoffs.