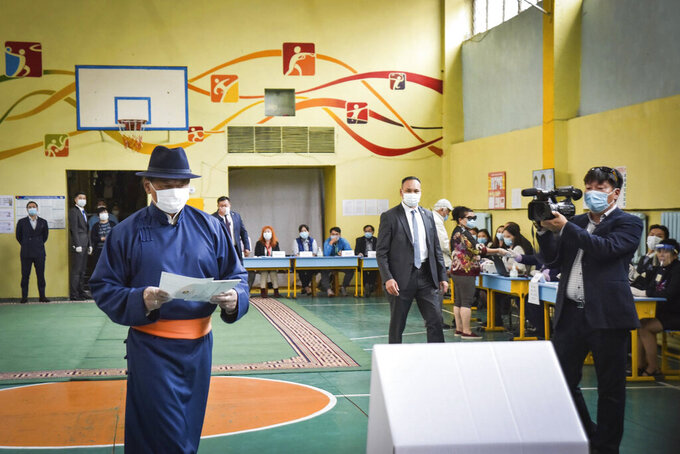 In this photo released by Xinhua News Agency, Mongolian Prime Minister Ukhnaa Khurelsukh at left prepare to cast his vote at a polling station in Ulaanbaatar, Mongolia, on Wednesday, June 24, 2020. Mongolians were voting in parliamentary elections Wednesday across the vast, lightly populated country, a U.S. ally squeezed between authoritarian governments in China and Russia. The polls are being held amid considerable success in the country's fight against the coronavirus, with just 215 cases of COVID-19 recorded. All of them have been imported and no one has died. (Chadraabal/Xinhua via AP)

ULAANBAATAR, Mongolia (AP) — Mongolia’s prime minister has resigned following a protest over a hospital’s treatment of a new mother who tested positive for the coronavirus.

Ukhnaagiin Khurelsukh, whose Mongolian People’s Party holds a strong majority in the parliament known as the State Great Khural, stepped down Thursday night after accusing President Khaltmaagiin Battulga of the Democratic Party of orchestrating a political crisis.

A small protest broke out in the capital Ulaanbaatar Wednesday after TV footage appeared of a woman who had just given birth being escorted in slippers and a thin robe from the maternity ward to a special wing for COVID-19 patients while holding her newborn.

Mongolia closed its borders last January and has held coronavirus cases to just 1,592, although many Mongolians have protested at the economic impact of control measures.

The incident comes against the background of the long-running political rivalry between Khurelsukh and Battulga. Khurelsukh is considered a likely presidential candidate to run against Battulga in elections to be held in June, but faces competition within his own party from wealthy businessman and former Prime Minister Batbold Sukhbaatar.

“President Battulga politicized and funded the people’s demonstration and lost my trust. I made this decision to prevent riot and disorder which might be caused by misuse of people’s trust and instigation,” Khurelsukh said in a statement to parliament on Thursday.

“As chairman of the ruling party, I believe the president should be held accountable. I want to say, furthermore, that a person who should protect the interests of the Mongolian people should not repeat such improper actions,” Khurelsukh said.

In his own address to parliament, Battulga expressed surprise at Khurelsukh’s resignation and accused monied interests within the Mongolian People’s Party of pushing him out in order to stymie investigations into alleged corruption in Mongolia’s crucial mining industry.

Mongolia has suffered from economic malaise, corruption and weak public services for the country’s 3.2 million people, about half of whom live in Ulaanbaatar.

The vast, land-locked country has strived to maintain its political and economic independence from both Soviet-era patron Moscow — which supplies virtually all of its energy needs — and rising regional power China, which buys more than 90% of its mining exports, mainly coal and copper.