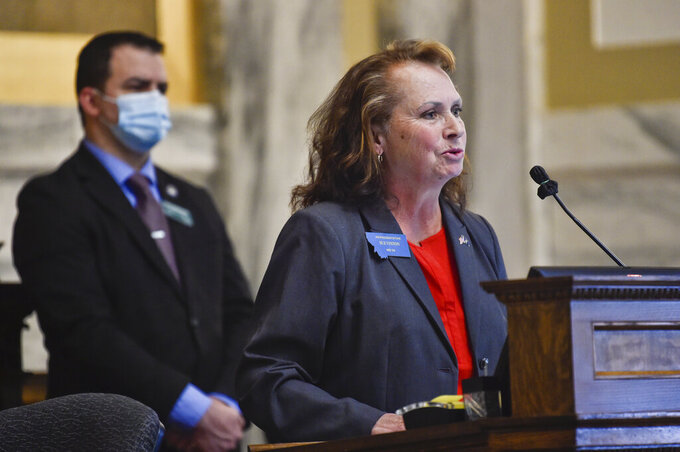 Lawmakers gathered in the state Capitol to pick leaders of the Montana state Senate and House Wednesday, with most Republicans in attendance and unmasked despite a growing coronavirus outbreak affecting the state.

Republicans head into the 2021 session with a two-thirds majority in both bodies and Montana will have a Republican governor for the first time in 16 years.

Blasdel, who served as Senate president pro tempore in the 2019 session, was unchallenged in the nomination process. He remarked on the “incredible mandate” given to Republicans in the 2020 election, where the party's candidates won every statewide race.

Republican Rep. Wylie Galt of Martinsdale was elected Speaker of the House, saying his goals remain holding the line on state spending, bringing accountability to state bureaucracy, protecting the rights of the unborn and protecting gun rights.

“The people of Montana have placed Republicans in the driver's seat of state government," Galt said in urging House members to vote for him. “Working together we will bring conservative change to Montana.”

“This is the first opportunity many of us have had to work with a Republican governor,” Smith said. “It’s up to us. We hold all the offices.”

Ellsworth said one of the Senate’s top concerns will be to “have a handle on what’s going on with COVID,” citing therapeutic drugs, testing, contact tracing, and vaccines as priorities for protecting the elderly and the vulnerable.

But while many Republicans emphasized the broad mandates given to the party in the elections earlier this month, Ellsworth said the Republicans would reach across the aisle.

“It’s about continuing the message of unity. And bringing aboard Democrats,” he said. “Everyone has a seat at the table.”

The House caucus was led by Rep. Llew Jones of Conrad, a member of the conservative solutions caucus that worked with minority Democrats during the 2019 session to reauthorize Medicaid expansion and pass an infrastructure bill.

Like most of his Republican colleagues, Ellsworth did not wear a mask during the caucusing session, despite warnings from state health officials that congregating in large groups without wearing masks could lead to increased spread of the respiratory virus in Montana, where the COVID-19 caseload is straining many hospitals, including in Helena.

The Lewis and Clark County health officer had recommended lawmakers hold virtual meetings to elect their leaders because of surging cases in the state.

“Some people have beliefs that you shouldn’t wear a mask, some people do. I wear a mask where I deem it’s appropriate,” said Ellsworth, adding that he quarantined for 14 days when his son tested positive for the virus.

All but three of the 30 Republican senators attended the caucus in person, while two of the 67 House members weren't in attendance. The Democratic caucuses met via an online platform, with some of them in meeting rooms at the Capitol. Those in the meeting rooms sat apart and wore masks.

Democratic Sen. Jill Cohenour and Rep. Kim Abbott were elected the minority leaders. Both are from Helena.

Abbott said the Democratic priorities will be defending Medicaid expansion, funding for education and infrastructure projects and advocating for a woman's right to choose.

She called the lack of social distancing and mask-wearing among Republicans “reckless.”

“We cannot participate in that kind of recklessness,” Abbott said, adding that she would consider legal action if Republicans don't follow COVID-19 directives, which include wearing masks in public settings.