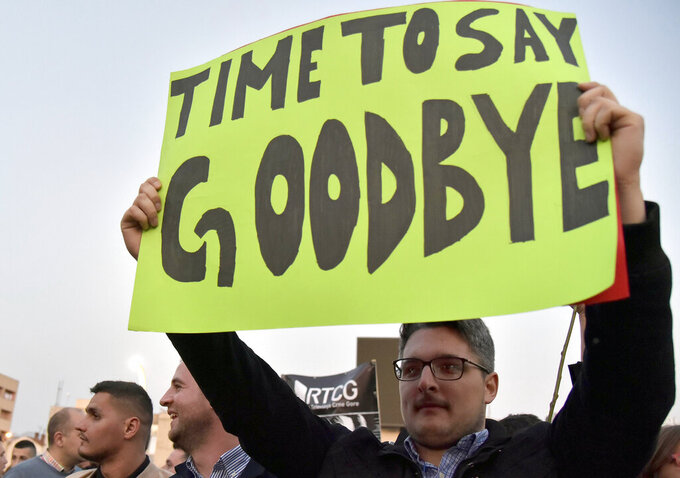 In this Saturday, March 23, 2019 file photo, a man holds a banner during a protest against President Milo Djukanovic in Montenegro's capital Podgorica. Montenegro's president says the upcoming parliamentary vote is crucial in the defense of the small Balkan country's independence in the face of renewed attempts from Serbia and Russia to install their nationalist and anti-Western allies to power. (AP Photo/Risto Bozovic, File)

PODGORICA, Montenegro (AP) — Montenegro is holding a parliamentary election this weekend with the pro-Western government facing pressure over the new coronavirus outbreak and ongoing tensions in relations with Serbia and the Serbian Orthodox Church because of a religious property law.

The long-ruling Democratic Party of Socialists on Sunday is bidding to stay in power for another four years, and is being challenged by a pro-Serb group advocating stronger ties with Serbia and Russia. Several smaller parties are also in the race.

Pre-election opinion polls have suggested that the ruling party will win the most votes but not enough to govern alone. During the past 30 years or so in power, the DPS party has led Montenegro to independence from much larger Serbia and into NATO, defying Russia.

Here is a look at the political and virus situation in Montenegro before Sunday's ballot:

The governing DPS is led by Montenegrin President Milo Djukanovic, who has been the main architect of the country's turn toward the West and away from its traditional allies Serbia and Russia.

Djukanovic now says that the upcoming vote is crucial to the defense of Montenegro's independence in the face of renewed attempts from Belgrade and Moscow to install their stooges to regain influence in the fellow-Slav and Orthodox Christian nation.

During the previous parliamentary vote in 2016, Montenegro thwarted an attempted coup by pro-Serb groups that was orchestrated by two Russian former military intelligence officers. More than a dozen people have been sentenced for the coup, including the two Russians who remain at large.

WHAT DOES THE OPPOSITION SAY?

The main opposition group led by the Democratic Front party has denied allegations of involvement in the failed coup, though some of its leaders have been convicted. The party has fostered close ties with both Serbia and Russia and says those relations should and must be stronger.

The alliance, dubbed “For the future of Montenegro,” has backed protests against the religious law that the Serbian Orthodox Church says will allow the state to take away its property. The group has said that “we must defend our faith," while also accusing the government of widespread “plunder."

One more opposition group has emerged third in surveys before the vote, the centrist “Peace is our nation" alliance, which also has supported the Serbian Orthodox Church and complained of widespread graft, but is seen as more moderate.

Also in the run are several smaller parties and the parties representing ethnic minorities.

WHY IS THE VOTE IMPORTANT?

Montenegrin leader Djukanovic has been a key ally in a Western bid to boost democracy and reconciliation in the volatile Balkans after the wars in the 1990s that followed the breakup of the former Yugoslavia.

While often criticized over slow democratic reform, Djukanovic has been praised for maintaining ethnic and political stability in the nation bitterly divided over what relations with Serbia, Russia and the West should look like.

After peacefully gaining independence from Serbia in 2006 and joining NATO in 2017, Montenegro is seen as the next in line for European Union membership. Djukanovic says this could be jeopardized if the pro-Serb opposition turns Montenegro into a “theocracy."

Entry rules have recently been relaxed in what government critics described as a pre-election move to lure support from both pro-Serbs and desperate tourism workers along the Adriatic Sea coast, which has seen empty hotels and beaches.

Health officials now describe the situation as stable though volatile. Nearly 90 people have died and more than 4,000 have been infected since March.

Polls open on Sunday at 0500 GMT (1 a.m. EDT) and close at 1800 GMT (2 p.m. EDT) for 540,000 registered voters. There are no exit polls, but polling stations and parties are expected to release their own predictions a few hours after polls close.