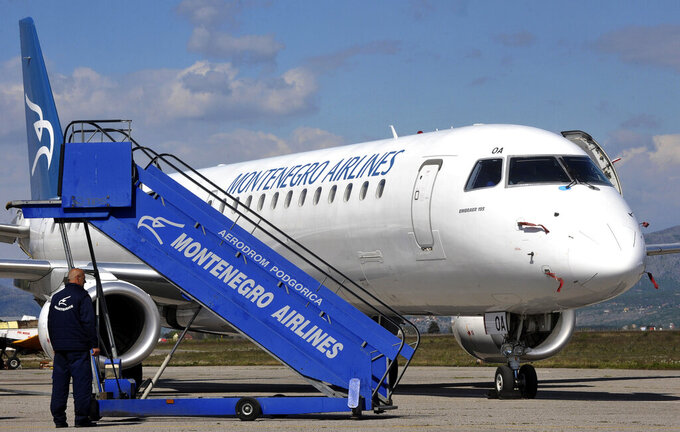 In this photo taken on April 10, 2014, Montenegro Airlines Embraer E195LR on the tarmac at the Golubovci airport, near Podgorica, Montenegro. Montenegro Airlines ceased its operations on Saturday, Dec. 26, 2020 after the small country's new government refused to continue financing the national carrier. The airline which was formed 25 years ago has apologized to its passengers for the sudden termination of all flights and thanked them for "the years of trust, travel and friendship." (AP Photo/Risto Bozovic)

The airline which was formed 25 years ago has apologized to its passengers for the sudden termination of all flights and thanked them for “the years of trust, travel and friendship.”

The company that operated a small fleet of Embraer 195 and Fokker 100s and flew to many European capitals is estimated to have accumulated over 150 million of euros in debt which grew further with the collapse of the summer tourist season because of the coronavirus pandemic.

Montenegro's new conservative government, which last month took over from a pro-Western leadership, said the company’s management suffered from “numerous omissions and shortcomings," adding that monthly salaries to over 350 employees were last paid in September.

The government said it will immediately stop funding the losses, adding that the airline’s debt is such that it faced the “possibility of confiscation of aircraft” on foreign airports. But the government added that it plans to form a “completely new” airline in the months to come.

The airline, which carried about 10 million passengers over the past two and a half decades, said the government’s “decision to shut down our company will have a negative impact on the entire aviation sector in the country.”

In a sentimental farewell gesture, the pilots on the company’s last flight to Belgrade on Friday were given permission by air controllers to make a heart-shape course in the skies over the picturesque mountainous Adriatic state.

“It was pure emotion triggered by the tears and huge love for our company by the crew and all its employees,” the flight's captain, Nikola Pavicevic, wrote on Facebook.