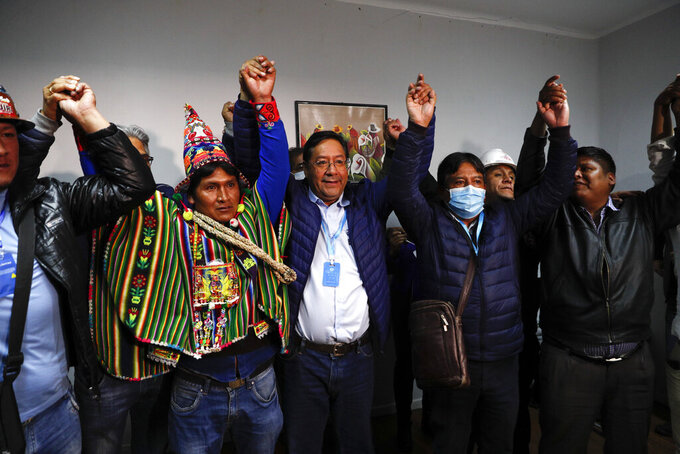 Officials released no formal, comprehensive quick count of results from Sunday's vote, but two independent surveys of selected polling places gave Arce a lead of roughly 20 percentage points over his closest rival — far more than needed to avoid a runoff.

Áñez asked Arce “to govern with Bolivia and democracy in mind.”

Arce, meanwhile, appealed for calm in the bitterly divided nation saying he would seek to form a government of national unity under his Movement Toward Socialism party.

“I think the Bolivian people want to retake the path we were on,” Arce declared, surrounded by a small group of supporters, some of them in traditional Andean dress in honor of the country’s Indigenous roots.

To win in the first round, a candidate needs more than 50% of the vote, or 40% with a lead of at least 10 percentage points over the second-place candidate. The independent counts, sponsored by the Catholic Church and civic groups, indicated Arce had a little over 50% of the vote and a roughly 20-point advantage over centrist former President Carlos Mesa, who acknowledged defeat.

The formal official count showed Arce and Mesa in a close race for much of Monday, but by evening Arce was edging away. With about 37% of ballots counted, Arce had 43% and Mesa had 36%. The early counted votes appeared to be largely from urban areas rather than the rural heartlands that have been the base of support for Morales and his movement. Officials said final results could take days.

Arce, who oversaw a surge in growth and a sharp reduction in poverty as Morales’ economy minister for more than a decade, will struggle to reignite that growth. The boom in prices for Bolivia's mineral exports that helped feed that progress has faded, and the new coronavirus has hit impoverished, landlocked Bolivia harder than almost any other country on a per capita basis. Nearly 8,400 of its 11.6 million people have died of COVID-19.

Arce, 57, also faces the challenge of emerging from the long shadow of his former boss, who remains polarizing but whose support enabled the low-key, British-educated economist to mount a strong campaign.

Áñez's government tried to overturn many of Morales' policies and wrench the country away from its leftist alliances. Newly installed electoral authorities barred Morales from running in Sunday’s election, even for a seat in congress, and he faces prosecution on what are seen as trumped-up charges of terrorism if he returns home.

Morales, who turns 61 this month, said at a news conference in Buenos Aires, Argentina, on Monday that he plans to return to Bolivia, though he did not say when.

Like Arce, he took a conciliatory tone and called for “a great meeting of reconciliation for reconstruction.”

“We are not vengeful,” he said.

He declined to say if he would have a role in the government. But few expect the sometimes-irascible politician — Bolivia's first Indigenous president — to sit by idly.

“Arce is not Morales, but the question is, who is going to govern Bolivia facing the approaching crisis," said political science professor Franklin Pareja.

A boyhood llama herder who became prominent leading a coca grower’s union, Morales was immensely popular as Bolivia boomed, but support was eroding due to his reluctance to leave power, increasing authoritarian impulses and a series of corruption scandals.

He shrugged aside a public vote that had set term limits, and competed in the October 2019 presidential vote, which he claimed to have narrowly won outright. But a lengthy pause in reporting results fed suspicions of fraud and nationwide protests followed, leading to the deaths of at least 36 people.

When police and military leaders suggested he leave, Morales resigned and fled the country, along with several key aides. Morales called his ouster a coup.

All seats in the 136-member Legislative Assembly also were also being contested Sunday, with results expected to echo the presidential race.

Morales led Bolivia from 2006 until 2019 and was the last survivor of the so-called “pink wave” of leftist leaders that swept into power across South America, including Brazil's Luiz Inácio Lula da Silva and Venezuela's Hugo Chavez.

Arce’s victory is bound to reenergize Latin America's left, whose anthem of economic justice has broad appeal in a region where poverty is expected to surge to 37% this year, according to the United Nations.

The Trump administration had celebrated Morales’ ouster as a watershed moment for democracy in Latin America, but on Monday a State Department spokesman said the U.S. looks forward “to working with whomever the Bolivians elect.”