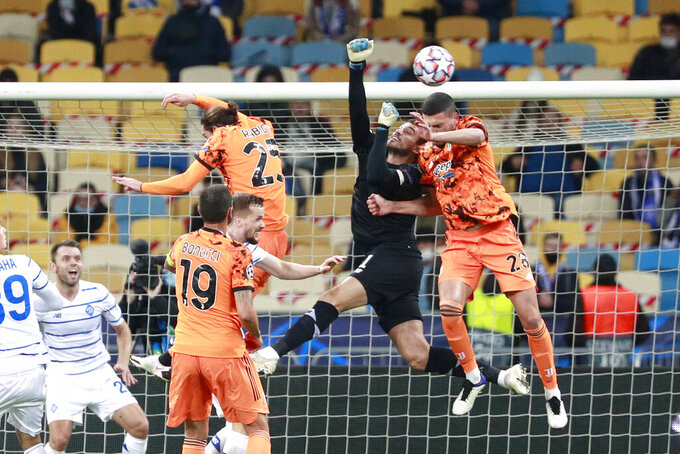 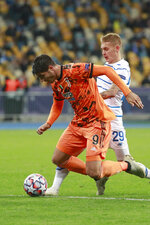 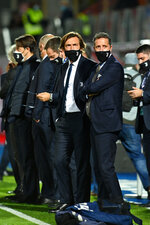 KYIV, Ukraine (AP) — No Cristiano Ronaldo, no problem for Juventus as Álvaro Morata scored twice to help the Bianconeri win 2-0 at Dynamo Kyiv in their opening Champions League match on Tuesday.

Ronaldo was ruled out after testing positive for the coronavirus last week but Morata marked his return to Juventus by netting twice in the second half.

“Playing in the Champions League with this shirt is a great emotion,” said Morata, who rejoined Juventus on loan from Atlético Madrid last month. "We want to get right to the end and we're fighting for this.

“It was important to win against a team that can give you problems, because they are fast and very young.”

Barcelona beat Ferencváros 5-1 in the other Group G match.

“Maybe in the end we deserved to score one goal but in general Juve were better and their win was fair," Dynamo coach Mircea Lucescu said. "Now we have to focus on our next league game and visit at Ferencváros.

"Juventus and Barcelona are teams of higher level. We need to gain experience, it’s important for our young players. Our organization of play tonight gives me hope for a good future of this squad.”

The coronavirus pandemic meant most of the Champions League matches were being played without fans, or only a limited amount. But there were 14,850 spectators allowed into the match in Kyiv.

Juventus midfielder Weston McKennie was also out after testing positive for COVID-19.

Pirlo almost saw his side take an early lead but Federico Chiesa’s angled drive was turned away by Heorhiy Bushchan. The Dynamo goalkeeper almost gifted Juventus the lead seconds later as he flapped at a corner which bounced off Giorgio Chiellini’s head and flew inches wide of the post.

Chiellini had to come off shortly after, in the 19th minute, as the Juventus defender appeared to have a thigh strain.

Juventus almost scored a spectacular opener in the 34th when Aaron Ramsey put in a cross from the left but Bushchan pulled off a fantastic save to keep out Dejan Kulusevski’s back-heeled flick.

The Bianconeri finally broke the deadlock in the first minute of the second half. Ramsey back-heeled a cross to Kulusevski, whose effort was blocked by Bushchan, but Morata fired in the rebound.

Morata, who turns 28 on Friday, doubled his tally six minutes from time. The Juventus forward headed in a cross from Juan Cuadrado.