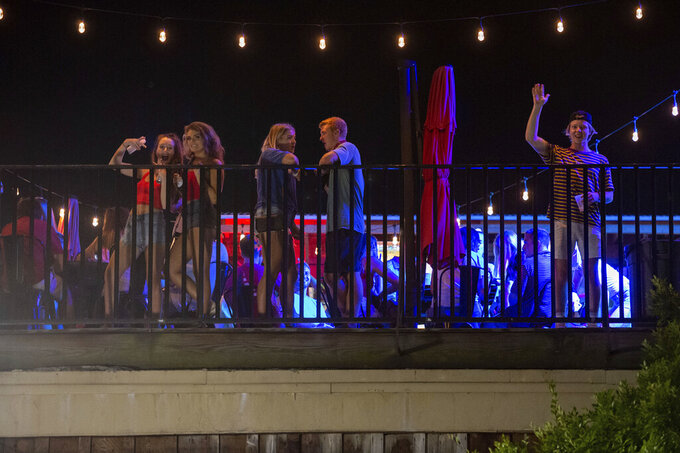 Patrons stand on the Bear Trap's rooftop bar on The Strip, the University of Alabama's bar scene, Saturday, Aug. 15, 2020, in Tuscaloosa, Ala. More than 20,000 students returned to campus for the first time since spring break, with numerous school and city codes in effect to limit the spread of COVID-19. (AP Photo/Vasha Hunt)

MONTGOMERY, Ala. (AP) — The University of Alabama has recorded 531 cases of COVID-19 on campus since the fall semester began last week, according to numbers the university system released Tuesday as officials try to clamp down on student parties, bars and other gatherings that could spread the coronavirus.

The university, which issued a 14-day moratorium on student gatherings last week, released the number of students, faculty and staff testing positive a day after Tuscaloosa's mayor ordered bars closed.

The university had earlier announced that initial results from a testing program found few students returning to campus on Aug. 19 were positive for COVID-19. Nearly 30,000 students took the entry tests, and 310 were found to be positive. But subsequent testing found hundreds more cases.

“However, over the past week, due to student behavior, we have seen a spike in the number of students who have sought re-testing because they became symptomatic or were exposed to a COVID-positive individual,” Dr. Selwyn Vickers, dean of the University of Alabama at Birmingham’s School of Medicine and co-chair of the university system’s Health and Safety Task Force, said in a statement.

"That trend prompted the decision to take further steps to reduce the chance that the COVID- 19 virus will escalate dramatically,” Vickers said.

On Monday, the mayor of Tuscaloosa ordered bars closed for the next two weeks after University of Alabama officials described an “unacceptable” rise in COVID-19 cases that could jeopardize plans to continue the semester on campus. Maddox said an unchecked spread of the virus threatens both the health care system and the local economy if students are sent home for the semester to do remote learning.

“The truth is that fall in Tuscaloosa is in serious jeopardy,” Tuscaloosa Mayor Walt Maddox said Monday.

Maddox said an unchecked spread of the virus threatens both the health care system and the local economy if students are sent home for the semester to do remote learning.

The university announced the 14-day moratorium on all in-person student events outside of classroom instruction Friday. Social gatherings are prohibited both on and off campus and the common areas of dormitories and fraternity and sorority houses are closed, according to the new guidelines. Visitors are not being allowed in dormitories or sorority and fraternity houses.

Auburn University has also seen an uptick in cases since students returned to campus on Aug. 17, according to numbers released by the university.

The university reported that 202 students and five employees at the main Auburn campus tested positive for COVID-19 between Aug. 15 and Aug. 21. Since mid-March, there have been 545 cases among students and staff, although most of those individuals were not on campus before August because they were attending classes remotely or working remotely, according to the university site.

State health officials have recently expressed optimism about a drop in COVID-19 numbers statewide, including hospitalizations, after a statewide mask order requiring face coverings in public places was issued. But there has also been concern that outbreaks could occur on college campuses after photos circulated of large crowds inside and outside off-campus bars near both Auburn and Alabama universities.