More than 700,000 without power in Connecticut after storm 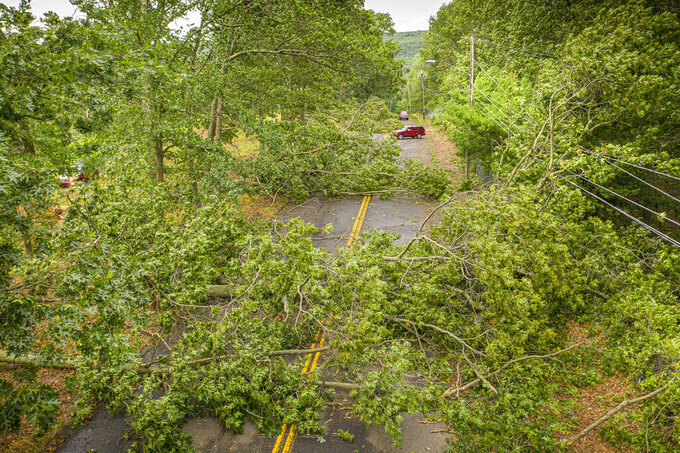 HARTFORD, Conn. (AP) — Hundreds of thousands of Connecticut residents remained without electricity on Wednesday, a day after Tropical Storm Isaisas ripped through the state, knocking down thousands of trees and power lines and leaving hundreds of roads impassable.

Connecticut Gov. Ned Lamont declared a state of emergencyg iven the widespread number of power outages across the state. The declaration authorizes the Democrat to take certain actions to speed up the state's recovery process.

"With more than 700,000 customers experiencing power outages, we need to take several emergency steps that will facilitate restoration,” said Lamont in a written statement. The Democratic governor was touring the damage Wednesday in Wethersfield, Middletown and South Windsor. Lamont said he's in communication with local officials and utility officials so any necessary resources can be moved if needed.

The state's Emergency Operations Center on Wednesday was managing both the response to the storm and to the coronavirus pandemic, he said.

As of midday, Eversource, the state’s largest electric utility, reported there were still more than 617,700 customers without power, or nearly 50% of its customer base, while United Illuminating reported at least 103,700 customer outages.

Frank Poirot, a spokesman for Eversource, said the number of electricity outages ranks as the state's third largest in recent history, following the 2012 October Nor'easter and Tropical Storm Irene.

“We’re looking to our other Eversource service territories in Massachusetts and New Hampshire. Once they finish cleaning up their areas they will be joining our crews down here,” he said. "That’s the first wave that we are looking at.”

The storm has been blamed for at least one death in the state. Police said a 66-year-old Connecticut man was killed by a tree during the height of the storm.

The man, whose name was not immediately released, was driving in Naugatuck at about 3:30 p.m. Tuesday. When he got out of his car to clear branches from the road, a tree fell and hit him, police said. He was pronounced dead at the scene.

At least seven other people were killed as the storm battered the East Coast on Tuesday with rain and fierce winds. They included Mario Siles, 60, who was inside a construction van that was crushed by a large tree in the Queens borough of New York City.