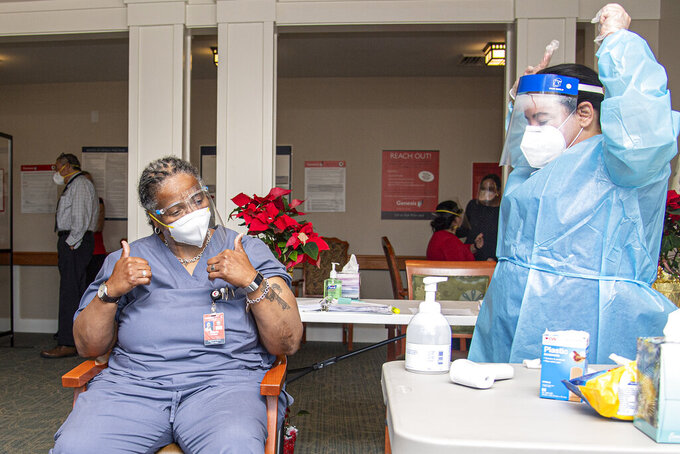 A huge U.S. study of another COVID-19 vaccine candidate got underway Monday as states continue to roll out scarce supplies of the first shots to a nation anxiously awaiting relief from the catastrophic outbreak.

Public health experts say more options in addition to the two vaccines now being dispensed — one made by Pfizer and its German partner BioNTech, the other by Moderna — are critical to amassing enough shots for the country and the world.

The candidate made by Novavax Inc. is the fifth to reach final-stage testing in the United States. Some 30,000 volunteers are needed to prove if the shot — a different kind than its Pfizer and Moderna competitors — really works and is safe.

“If you want to have enough vaccine to vaccinate all the people in the U.S. who you’d like to vaccinate — up to 85% or more of the population — you’re going to need more than two companies,” Dr. Anthony Fauci, the top U.S. infectious disease expert, told The Associated Press on Monday.

The coronavirus is blamed for about 1.8 million deaths worldwide, including more than 330,000 in the U.S. This has been the deadliest month of the outbreak in the U.S. yet, with about 65,000 deaths in December so far, according to the COVID Tracking Project. The nation has repeatedly recorded more than 3,000 dead per day over the past few weeks.

And the U.S. could be facing a terrible winter: Despite warnings to stay home and avoid others over Christmastime, nearly 1.3 million people went through the nation's airports on Sunday, the highest one-day total since the crisis took hold in the U.S. nine months ago.

The Trump administration’s Operation Warp Speed expects to have shipped 20 million doses of the Pfizer and Moderna vaccines to states by the beginning of January, fewer than originally estimated to the frustration of states and health officials trying to schedule the shots.

There is no real-time tracking of how quickly people are getting the first of the two required doses. As of Monday, the Centers for Disease Control and Prevention had reports of more than 2.1 million vaccinations out of 11.4 million doses shipped — but the agency knows that count is outdated. It can take days for reports from vaccine providers to trickle in and get added to the site.

“Just because a vaccine arrives doesn’t mean we can put an on-the-spot clinic up and running,” said Jenny Barta, a public health official in Carlton County, Minnesota.

But Tuesday, her agency aims to vaccinate 100 people in a drive-thru clinic for emergency medical workers that Barta hopes could become a model for larger attempts at mass vaccination. Nurses will wheel vaccine to cars lined up in a county-owned snowplow garage. Once the drivers get their shots, they will wait in parking spaces to be sure they don’t have an allergic reaction before heading home.

“Vaccinating one individual at a time is how we’re going to work our way out of this pandemic,” she said.

Yet another worry hanging over the vaccine scramble: Will shots block a new variant of the coronavirus that emerged in Britain and might spread more easily? Fauci said that data from Britain indicates the vaccines still will protect against the virus but that National Institutes of Health researchers will be “looking at it very intensively” to be sure.

A look at the frontrunners in the global vaccine race:

The U.S. based its emergency rollout of the Pfizer-BioNTech vaccine and a similar one made by Moderna and the NIH on studies suggesting they are both roughly 95% effective. Europe over the weekend began its first vaccinations with the Pfizer shot, and on Jan. 6 will decide whether to add Moderna's.

These shots are made with a brand-new technology that injects a piece of genetic code for the spike protein that coats the coronavirus. That messenger RNA, or mRNA, induces the body to produce some harmless spike protein, enough to prime the immune system to react if it later encounters the real virus.

Both vaccines must be kept frozen, the Pfizer shot at ultra-low temperatures that complicate its delivery to poor or rural areas.

Additional companies are working toward their own mRNA candidates, including Germany’s CureVac, which has begun a large study in Europe.

The Novavax candidate is made differently, using what Fauci called a “more tried and true” technology that needs only ordinary refrigeration. The Maryland company grows harmless copies of the coronavirus spike protein in the laboratory and mixes in an immune-boosting chemical.

Novavax already has enrolled 15,000 people in a late-stage study in Britain and 4,000 in South Africa. The newest and largest study, funded by the U.S. government, will recruit volunteers at more than 115 sites in the U.S. and Mexico and target high-risk older adults along with volunteers from Black and Hispanic communities, which have been hit hard by the virus.

“We've got to protect our community and our people,” said the Rev. Peter Johnson, 75, a prominent civil rights activist in Dallas who was among the first volunteers.

Two-thirds of participants will receive vaccine and the rest dummy shots, a twist from earlier vaccine studies that gave half their volunteers a placebo. That should help researchers recruit people who wonder whether it’s better to take part in a study or wait their turn for an existing shot, said Dr. Gregory Glenn, research chief at Novavax.

For many people, that would be a long wait: The Pfizer and Moderna shots are slated first for health care workers and nursing home residents, followed by people 75 and older and essential workers.

“If you wanted to hedge your bets, for most people who aren’t in those very high-risk groups, the shortest route to getting the vaccine would be to sign up for a trial,” said NIH Director Dr. Francis Collins.

The next big vaccine news may come from Johnson & Johnson, which is aiming for a one-dose COVID-19 vaccine.

Made in yet another way, it uses a harmless virus – a cold virus called an adenovirus -- to carry the spike gene into the body. In mid-December, J&J finished enrolling about 45,000 volunteers in a final-stage study in the U.S. and a half-dozen other countries. Fauci expects early results sometime next month.

In Britain, regulators also are considering clearing a similar vaccine made by AstraZeneca and Oxford University.

Tests of the shots in Britain, South Africa and Brazil suggested they are safe and partially protective — about 70%. But questions remain about how well the vaccine works in people over 55 and how to interpret results from a small number of people given a different set of doses.

A U.S. study of the AstraZeneca shots is still recruiting volunteers; Fauci said researchers hope it will provide a more clear answer.

Companies in China and Russia also are producing adenovirus-based vaccines and began administering them before the results of final testing came in. Argentina is expected to soon use the Russian vaccine.

Spike-focused vaccines aren’t the only option. Making vaccines by growing a disease-causing virus and then killing it is a still older approach that gives the body a sneak peek at the germ itself rather than just that single spike protein.

China has three such “inactivated” COVID-19 vaccines in final testing in several countries and has allowed emergency use in some people ahead of results. An Indian company is testing its own inactivated candidate.

The Associated Press Health and Science Department receives support from the Howard Hughes Medical Institute’s Department of Science. The AP is solely responsible for all content.