More fans, May weather: 2021 French Open is closer to normal 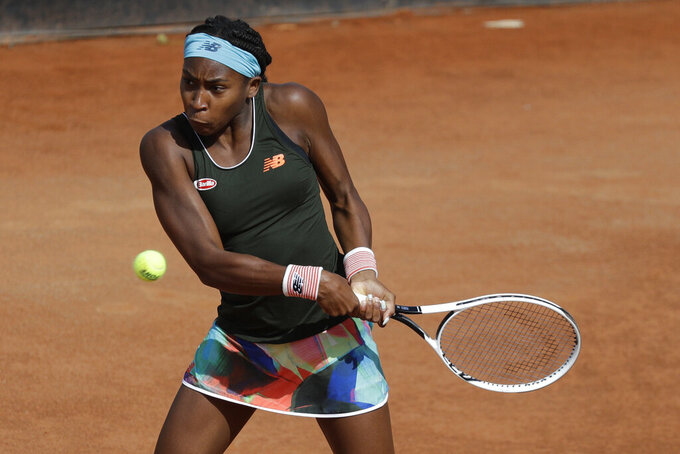 Cori Gauff, of the United States, returns the ball to Poland's Iga Swiatek during their semi-final match at the Italian Open tennis tournament, in Rome, Saturday, May 15, 2021. (AP Photo/Gregorio Borgia)

PARIS (AP) — Still not quite its packed, pre-pandemic self, Roland Garros bubbled with tennis, cheers and sun-kissed pleasures again Sunday as this year's tournament began with some color back in its cheeks compared to the bland edition held in the autumnal chill last year.

Nearly 5,400 people per day are allowed on-site at the outset of the French Open, with expectations of even more allowed in at the tail end of the tournament, after the 2020 version was limited to 1,000 spectators daily when it started in September due to COVID-19 concerns.

Courts that last year rang hollow and empty now echoed with chants and applause, especially the smaller courts that, because of their limited capacity, felt almost crowded — even with some seats marked as unavailable with red stickers asking that they not be used because of health reasons.

Spectators again formed lines, whereas last year they’d been able to waltz right in and pretty much sit where they wanted.

Christian Noel, who took two weeks of vacation from his job in insurance to attend the French Open for 10 days, reveled in being back at the venue. Wearing a face mask, as required for all spectators aged 12 and over except while eating or drinking, he soaked up play on Court 8, newly opened this year.

"I’m delighted,” he said. “I really missed it last year.”

Waiting in line to get into another new, small court, Court 6, actually was a joy to Matthieu Cassot, a financial comptroller from the Paris region. He was among the lucky few who managed to get tickets in 2020, attending twice, an experience he found “quite sad.”

“It’s doing me the power of good,” he said of Sunday's livelier atmosphere. “The pleasure of seeing people and the pleasure of all being back together again.”

The larger show courts, of course, were more noticeably empty, because of so many thousands of still-vacant seats.

Last year, kiosks were closed, so those who were on site had very little to spend their cash on.

Now, though, they once again were tempted by souvenirs, snacks and drinks to sip. The sun warmed a new 10-foot statue of 13-time champion Rafael Nadal and people who took in the rays, unlike all of the shivering in coats and jumpers of seven-plus months ago.

Pamela Murphy, a doctor from New York, said she paid three times their value for tickets she bought for Sunday.

In Paris to consult with French colleagues about the coronavirus, she savored pink Champagne — 100 euros, or about $120, a bottle — with a friend outside Court Philippe Chatrier.

“They put up the umbrella for me and set up the table,” she said. “The French are so lovely.”

Maybe Venus Williams figures “if you can't beat 'em, join ’em,” because she is teaming up with Coco Gauff in doubles at the French Open.

The 40-year-old Williams and the 17-year-old Gauff were in the women's doubles draw released by the clay-court tournament Sunday.

When Gauff became the youngest qualifier in Wimbledon history at age 15 in 2019, she faced Williams in the first round of the main draw — and beat her, along the way to getting to the fourth round before losing to eventual champion Simona Halep.

Then at the Australian Open in 2020, Gauff again faced Williams in the first round — and again beat her, along the way to getting to the fourth round before again losing to the eventual champion, Sofia Kenin.

Gauf has won three WTA doubles titles with Caty McNally, including last week at Parma, Italy, where Gauff also won the singles titles to push her ranking to a career-best No. 25. She is the youngest American woman to make her debut in the Top 25 since Williams' younger sister, Serena, back in 1998.

The Williams siblings have won 14 Grand Slam doubles titles together.

Danielle Collins returned to Grand Slam action Sunday after having surgery for endometriosis — and she won.

She was a semifinalist at the 2019 Australian Open and a quarterfinalist at last year’s French Open.

Endometriosis involves abnormal tissue growth from the uterus that can cause severe pain and infertility. An estimated 1 in 10 women of reproductive age has the condition.

“When we’re dealing with these painful moments, we learn to accept it," Collins said. "And for me, things started to become too abnormal and really unhealthy, and it was causing a lot of havoc for me around that time.”

Collins said a friend of hers had endometriosis and helped her identify that's what was causing her trouble.

“A handful of different women that have reached out to me — friends, family, people that I don’t know, that I’ve never met — that have been affected by endometriosis,” Collins said.

“It’s been kind of nice to have that sense of community, because I think when you’re living with these types of things, sometimes it can be very isolating, because you feel alone and that you’re dealing with these problems. Sometimes there isn’t a light at the end of the tunnel," she said. "So if I can ever be a friend to somebody and share my experience, hopefully that can offer them some knowledge or information that maybe they didn’t know before.”