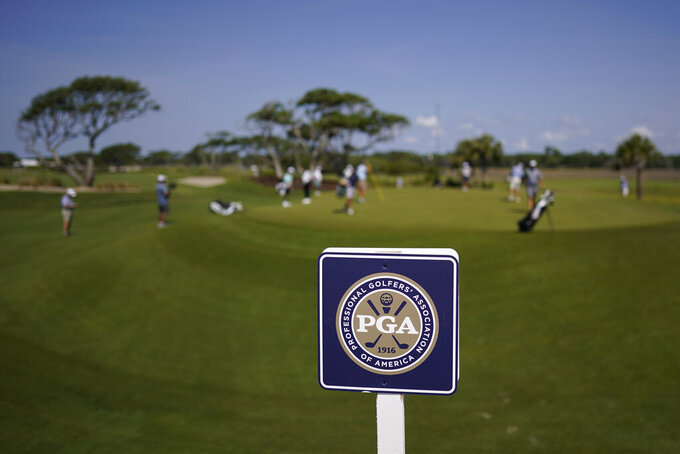 Players putt on the third hole during a practice round at the PGA Championship golf tournament on the Ocean Course Tuesday, May 18, 2021, in Kiawah Island, S.C. (AP Photo/David J. Phillip)

COLUMBIA, S.C. (AP) — South Carolina continues to have more money to spend because the state is collecting more tax money than expected as the economic impact of COVID-19 is less than predicted.

About $421 million more than predicted rolled into the state's bank accounts through April, which accounts for 10 of the 12 months of this budget year, according to a report Thursday by the Revenue and Fiscal Affairs Office.

That is nearly 3% above the economists predictions and puts South Carolina on track to collect about 15% more in taxes than it did for the fiscal year from July 2019 to June 2020.

The continued good news has lawmakers going from dire predictions of barely hanging on or even bracing for cuts in programs and employees last summer to senators writing a spending plan with more than $1 billion in spending on renovating college buildings and helping construct veteran nursing homes as well as dozens of local projects like boat ramps, parks, festivals and repairs to a lighthouse.

The House, which had the first crack at writing the 2021-22 budget went much more conservative. They come back in June for a special session leaders have dubbed “Budget 2.0” to review and revise the Senate plan, which also includes a 2% raise for all state employees and a $1,000 raise for teachers.

The state's $10 billion spending plan that starts in July is approaching $2 billion more than lawmakers had to spend in the previous plan. The extra taxes collected this fiscal year will roll into that next budget.

And all of this does not count $2.1 billion of federal stimulus money Congress approved in March that South Carolina has years to spend.

The Revenue and Fiscal Affairs Office on Thursday did again warn COVID-19 and its fallout mean its predictions have more volatility.

With income tax deadline extended to mid-May, the state has processed about 200,000 fewer returns than the same time in 2019. If the state owes more in refunds than predicted, the amount of tax revenue lawmakers have to spend goes down. But those final returns could also end up brining in more money too, the economists said at Thursday's meeting.

They are also watching to see if supply chain interruptions like the scarcity of computer chips or inflation like the rapid rise in lumber costs knocks the economy off its recovery course.

Looming over it all is still COVID-19, especially in other countries where the disease appears to be less under control.

The state is collecting 5% more in accommodation taxes and 6% more in alcohol taxes than fairly rosy earlier predictions, which are signs tourists are coming back and people are heading out to restaurants.

Gov. Henry McMaster said all the good news validates his decision to try to keep as much open as he felt he safely could during the height of the pandemic.

“Today’s good news ... would have seemed impossible a year ago, yet here we are," McMaster said in a rare statement released after the economist gave their report.