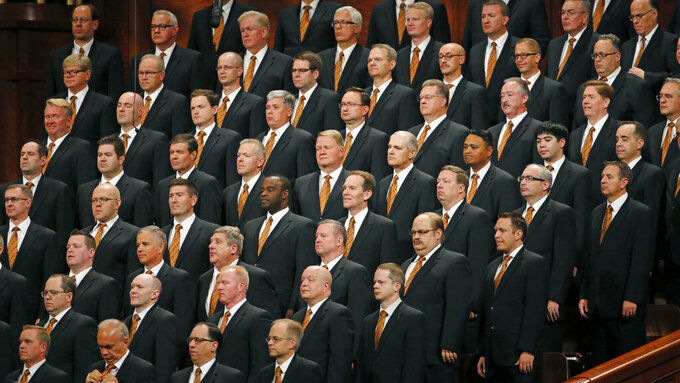 FILE - In this Oct. 5, 2019, file photo, members of The Tabernacle Choir at Temple Square look on during The Church of Jesus Christ of Latter-day Saints' twice-annual church conference in Salt Lake City. The annual Christmas concert by the choir has been cancelled because of lingering concerns about the coronavirus pandemic. The cancellation of the Tabernacle Choir at Temple Square's holiday concert announced Friday, Aug. 21, 2020, by church officials is the latest sign that disruptions to normal religious activity will continue through the holidays. (AP Photo/Rick Bowmer, File)

SALT LAKE CITY (AP) — The annual Christmas concert by The Church of Jesus Christ of Latter-day Saints' choir has been canceled because of lingering concerns about the coronavirus pandemic.

It will the first time since the holiday concert began in 1974 that the show has been canceled, said Kim Farah, a spokeswoman for the Tabernacle Choir at Temple Square.

The cancellation announced Friday by church officials is the latest sign that disruptions to normal religious activity will continue through the holidays.

The Utah-based faith previously announced it would hold its twice-yearly signature conference in October without in-person audience as it did at the April conference.

The faith has limited activities at temples and allowed regular Sunday worship services to resume only where it's allowed under local government rules and without safety measures. It's missionary program has shifted to focusing on online faith outreach.

The Christmas concert that has been cancelled usually brings brings thousands to the faith's 20,000-seat auditorium in Salt Lake City and features guest performers such as Broadway star Kelli O’Hara and actor Richard Thomas. It has been held for decades without disruption.

The choir, previously known as the Mormon Tabernacle Choir, also announced the cancellation of two other fall concerts and auditions.