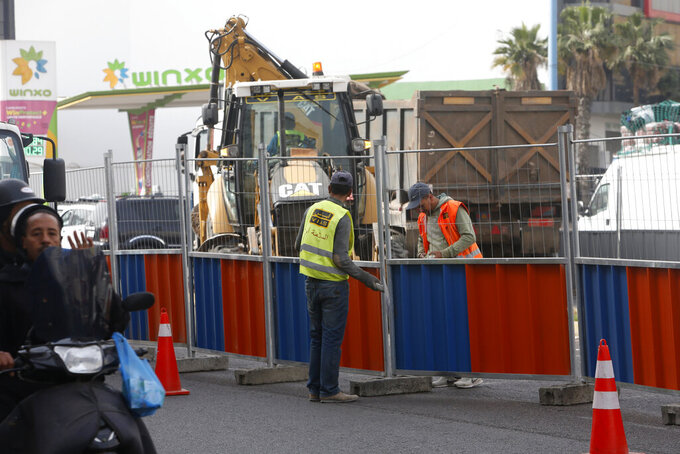 Workmen in Casablanca, Morocco, Tuesday, April 6, 2021. Moroccan authorities have announced the discovery of a new local variant of the coronavirus and extended an overnight curfew as infections rise again. (AP Photo/Abdeljalil Bounhar)

RABAT, Morocco (AP) — Moroccan authorities decided Wednesday to enforce a night-time curfew during the holy month of Ramadan because of a recent rise in COVID-19 cases, as scientists announced the discovery of a new, local variant of the virus.

Many Moroccans voiced their anger over the decision on social networks, describing it as another blow to many businesses already struggling to survive, as well as to family gatherings that are a central part of the holiday.

While the North African kingdom has had one of the region's most successful vaccination programs so far, it is also seeing a growth in coronavirus infections, especially in Casablanca, the largest city.

A curfew from 8 p.m to 6 a.m has been in place since December, and the Moroccan government decided Wednesday to extend it through Ramadan, which starts April 13 in Morocco.

Because observant Muslims don't eat or drink in the daytime during Ramadan, cafes and restaurants depend on nighttime business that's now off-limits because of the curfew.

Countries around the Mideast imposed some virus restrictions and curfews for Ramadan last year, and several are considering, or renewing restrictions, this year.

The kingdom has administered the highest number of inoculations in Africa so far — 8.3 million doses for a population of 36 million people since vaccinations began Jan. 29. The per-person vaccination rate is higher than in some European countries that started a month earlier, but concerns are rising that Morocco's vaccine supplies are drying up and the rate could slow.

Morocco is using vaccines from AstraZeneca and China’s Sinopharm. Millions more doses are expected eventually from both companies as well as from the global COVAX program to provide vaccines to low and middle-income countries.

Meanwhile, the Moroccan government's National Scientific and Technical Committee for COVID-19 announced the discovery of a new variant of the virus first detected in the southern city of Ouarzazate. It was not immediately clear if it is linked to the recent spike in infections in the kingdom.

The new variant can be classified as “100% Moroccan," said professor Azzedin Ibrahimi, member of the committee and director of the biotechnology laboratory at the Faculty of Medicine and Pharmacy in the capital Rabat. He said Sunday that it was detected as part of a study conducted by Moroccan researchers into the spread of various variants.