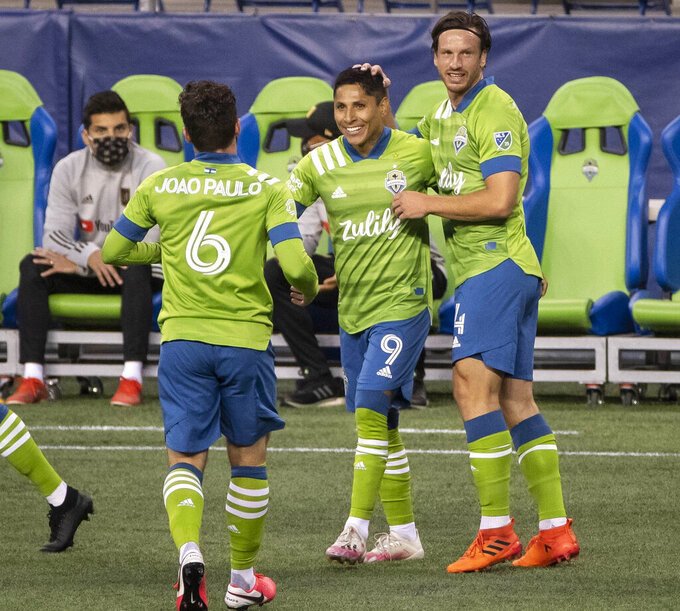 Seattle Sounders' Raul Ruidiaz (9) is congratulated after scoring in the 12th minute of an MLS soccer match against LAFC, Sunday, Aug. 30, 2020, in Seattle. (Dean Rutz/The Seattle Times via AP)

SEATTLE (AP) — Jordan Morris scored two goals less than a minute apart early in the second half, and Seattle rolled past Los Angeles FC 3-1 on Sunday night in the Sounders first home match in 5½ months.

Playing in an eerily empty CenturyLink Field, Morris scored 59 seconds apart in the opening moments of the second half as Seattle gained a bit of revenge after LAFC’s 4-1 thumping of the Sounders during the MLS is Back tournament in Florida.

In the past, two goals that close together would have sent Seattle’s home crowd into a frenzy. But it was instead met with a murmur of piped-in crowd noise as the stadium is expected to remain empty for the rest of the MLS season due to the COVID-19 pandemic.

“I think everyone is obviously missing the fans. but it was still nice to be back playing at home,” Morris said. “We've obviously never played without fans before but we still feel like this is our home stadium and we feel very confident but of course we miss the fans and we feel their support from afar."

It was a decidedly un-Seattle atmosphere for the Sounders' first home match since March 7. Instead of the normal, with nearly 40,000 fans in attendance, some of the lower bowl seats were replaced by tarps with advertisements.

“The Brougham End,” where Seattle’s most rabid fans of the “Emerald City Supporters” normally stand and chant the entire 90 minutes, was replaced by a smattering of banners, including a large “Black Lives Matter,” banner directly behind the goal.

“It’s different without fans. But for what we had to work with, or what we’re dealing with with this COVID-19, I thought it was good. It was a good start,” Seattle coach Brian Schmetzer said.

It was at that end of the stadium where Morris scored his two goals. On the first, Morris collected a long pass from Nicolas Lodeiro and dribbled around LAFC goalkeeper Kenneth Vermeer, who was late coming out from goal. Morris finished easily into the open net.

Moments after restarting, Seattle’s João Paulo sent a cross into the box and Morris was unmarked, giving Seattle a 3-0 lead.

Raúl Ruidíaz scored in the first half with a stunning 35-yard left-footed shot that caught Vermeer by surprise and out of position. Ruidíaz was subbed off at halftime for precautionary reasons due to a heel contusion.

Diego Rossi scored in the 60th minute but LAFC lost consecutive matches for the first time since the 2018 season. It was the first match for LAFC since learning league MVP Carlos Vela is out indefinitely with a left knee injury.

“(It's) a tough stretch for us and you can just see with so many guys confidence, mentality, and performance, things we've got to find a way to get back,” LAFC coach Bob Bradley said.

Both teams had midweek matches postponed after players made a collective statement against racial injustice.

The Sounders last home match in early March came as the COVID-19 pandemic was in its initial outbreak in the United States and with the Seattle region as the epicenter. The Sounders played to a 1-1 draw with Columbus before an announced crowd of 33,080. It was the smallest crowd for a Sounders home match since its inaugural season of 2009.

At the time, there had been 16 deaths and 102 diagnosed coronavirus cases in Washington state. Now, there have been more than 74,000 confirmed cases and 1,900 deaths attributed to the virus in the state, according to the Washington Department of Health.