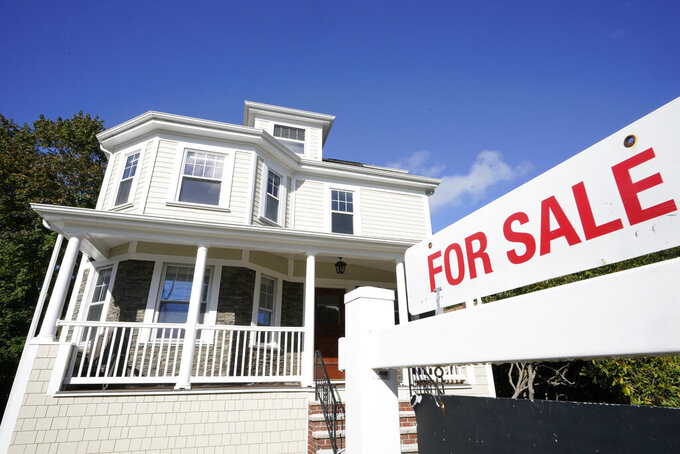 FILE - A for sale sign stands in front of a house, Tuesday, Oct. 6, 2020, in Westwood, Mass. The long period of ultra-low rates on home loans may be over. Long-term bond yields, which can influence interest rates on mortgages, have climbed this month amid expectations of ramped-up U.S. government stimulus spending, economic growth and higher inflation. (AP Photo/Steven Senne, File)

LOS ANGELES (AP) — The long period of record-low rates on home loans could soon be over.

Long-term bond yields, which can influence interest rates on mortgages and other consumer loans, are climbing this month amid expectations of higher U.S. government spending on pandemic relief and an economy recovery as more people get vaccinated for COVID-19.

The yield on the 10-year Treasury briefly hit 1.18% earlier this week. That’s up from less than 0.90% at the start of the year and the highest since last March. Yields rise when bond prices fall.

Economists forecast further modest mortgage rate rises this year. While that's unlikely to derail the red-hot housing market, it could make it tougher for would-be homebuyers.

“As bright as the prospects are for the economy after vaccines have reached critical mass, there are still a lot of economic sore spots that we have to work through between now and then,” said Greg McBride, chief financial analyst at Bankrate. “It’s still going to be a very low-rate environment, even for long-term rates like mortgages.”

Home loan rates tend to track moves in the 10-year Treasury yield. Damage from the coronavirus pandemic on the U.S. and global economies fueled demand for U.S. bonds, pushing their yields lower. As a result, home loan rates also fell through most of 2020.

The average rate on the benchmark 30-year fixed-rate home loan rose to 2.79% this week from a record low of 2.65% last week, according to mortgage buyer Freddie Mac. The rate stood at 3.65% a year ago. It’s now at the highest level since mid-November.

McBride forecasts that the average rate on a 30-year mortgage will rise to 3.1% by the end of the year. That’s in line with the National Association of Realtors’ outlook and close to the 3.2% forecast from the Mortgage Bankers Association.

Record-low mortgage lending rates helped fuel a housing boom last summer after a brief slowdown in the spring due to the coronavirus lockdowns.

As of November, sales of previously occupied U.S. homes were nearly 26% higher than a year earlier, according to NAR. The red-hot housing market has left the number of available properties for sale at record lows, which has contributed to a sharp increase in home prices. In November, the U.S. median home price was $310,800, up nearly 15% from a year earlier, according to NAR.

Mortgage rates have a ways to go before climbing back to where they were even a year ago. That means homeowners may still be able to benefit from refinancing at a lower rate.

“This rapid uptick has likely unnerved many home shoppers, particularly those at the financial margin, who currently face a hotly competitive market in which prices are rising at their fastest pace in decades,” said Matthew Speakman, an economist at Zillow.

“As has been the case for months, the path forward for mortgage rates, and indeed the economy, will be dictated by our ability to contain and treat COVID-19 as well as improvement in the labor markets,” he said. “Absent meaningful progress on those fronts, there remains a limit to how much higher mortgage rates will head in the near future.”