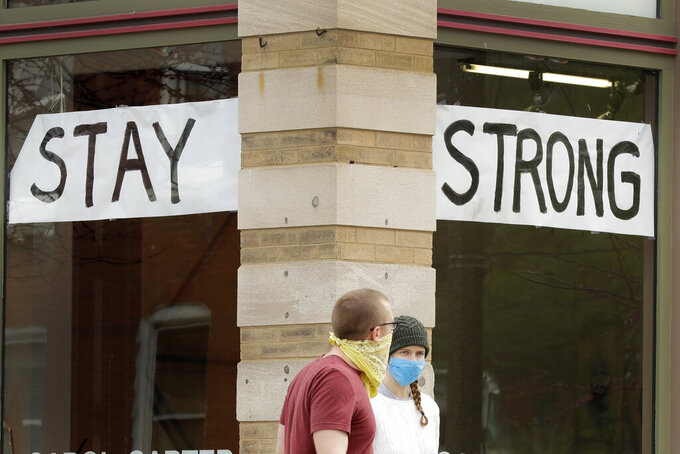 People walk down a street wearing face coverings Monday, April 6, 2020, in St. Louis. The Centers for Disease Control and Prevention now recommends wearing cloth face coverings in public settings after recent studies have shown a significant portion of the population can transmit the coronavirus without showing any symptoms. (AP Photo/Jeff Roberson)

O'FALLON, Mo. (AP) — Older people have been far more likely to die worldwide from the coronavirus, and statistics from the Missouri Department of Health and Senior Services show the state is no exception.

The health department on Tuesday reported 53 fatalities from COVID-19, the illness caused by the coronavirus. The toll rose by 15 from Monday. The department also reported 3,037 confirmed cases, up 315, or 11.6%, from Monday.

Twenty of the 53 Missouri residents who have died were age 80 or older, and 17 were in their 70s. Nine were in their 60s and five in their 50s. Just two of the 53 deaths confirmed by the state involved people younger than 50.

The actual number of deaths in Missouri may be significantly higher. A database operated by Johns Hopkins University shows 65 deaths in Missouri. The discrepancy could be because the university updates its data more often, and Missouri just recently changed its policy to require that coronavirus deaths be reported within 24 hours.

On Tuesday, Gov. Mike Parson announced an emergency rule making it easier for police, firefighters and other first-responders who contract the coronavirus to collect workers compensation benefits, by establishing a presumption that their disease was work-related.

Authorities on Tuesday reported the first death of a state prison inmate from the coronavirus. Officials in St. Joseph said a man in his 50s from the Kansas City area was the first inmate in the state to test positive for COVID-19. He was last held in the Western Reception, Diagnostic and Correctional Center in St. Joseph. His name was not released, The Kansas City Star reported.

Nursing homes have been severely impacted in Missouri, especially Frontier Health & Rehabilitation in St. Charles, where 42 residents and eight workers have tested positive since the outbreak was first reported March 23, and test results are still pending for more than a dozen others. Five residents of the nursing home have died from COVID-19, the the St. Charles County Department of Public Health reported Tuesday.

Most infected people develop mild or moderate coronavirus symptoms that clear up within three weeks, such as fever and cough. But older adults and people with existing health problems are particularly susceptible to more severe illness, including pneumonia.

State lawmakers are convening Tuesday and Wednesday. Republican Gov. Mike Parson needs their approval to spend what could amount to billions of dollars in federal funding for medical supplies, local governments, and other services to fight the virus.

The pandemic has forced businesses to close across the U.S., leaving normally busy roadways with little traffic. The Missouri Department of Transportation and the Missouri State Highway Patrol said they're seeing an increase in speeding and reckless driving as a result of the lower traffic volume.

“Please do your part to make our roadways safer and not add to the workload of our already overburdened healthcare providers," Transportation Department highway safety and traffic engineer Nicole Hood said in a statement.