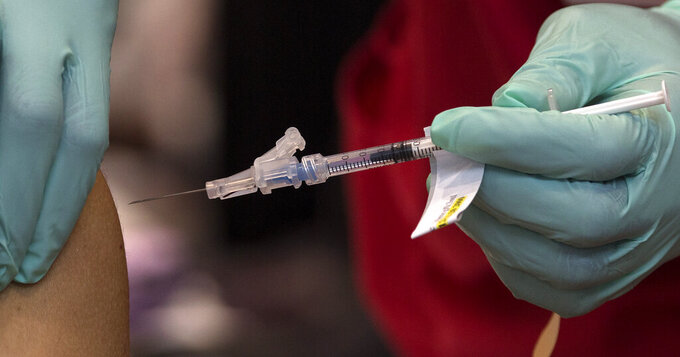 BATON ROUGE, La. (AP) — About 85% of Louisiana's prisoners aged 70 and older opted to get the coronavirus vaccine once access opened to the elderly statewide, according to data that has corrections officials optimistic that large swaths of the state prison population will follow suit when they are eligible.

Louisiana corrections officials are offering inmates a $5 canteen credit for receiving the vaccine and promising wider access to visitation and programming once those activities resume, The Advocate reports.

Of the 460 Louisiana inmates who are 70 or older, 394 have opted to get vaccinated, according to the Department of Corrections. Another 19 elderly state inmates who are being held in local jails across Louisiana have received the first dose, said corrections spokesman Ken Pastorick.

Other inmates in local jails who meet the eligibility age could be vaccinated soon through an effort coordinated by the Louisiana Sheriffs' Association. The vast majority of those inmates are awaiting trial and have not been convicted of a crime.

Prisons and jails became epicenters of the virus in many communities in the U.S. — a phenomenon that experts said was inevitable because of close quarters and enclosed spaces that make social distancing impossible. Some experts argue vaccine distribution plans should take that into account, emphasizing that detention centers are not isolated from cities and towns surrounding them.

Some states are giving prisoners and prison staff higher priority in their vaccine distribution plans, but they haven’t moved to the front of the line in Louisiana.

Inmates are not mentioned in the current guidelines for Louisiana, which place corrections officers and jailers in the group that will be eligible for vaccines next alongside grocery store workers and schoolteachers. Gov. John Bel Edwards hasn’t provided a timeline for when the state will move into that phase of its vaccination plan, though the state is dropping the vaccine eligibility age to 65 starting Monday.

That means more inmates and guards will have access to immunizations because of their age.

Louisiana's vaccine guidelines also allow prison medical staff and corrections officers assigned to areas housing COVID-positive inmates to get the shots. So far, 465 prison staff members have received at least their first dose of the two-dose vaccine, according to corrections data. The department is in the process of vaccinating employees over 70, including Secretary Jimmy LeBlanc, who received his first dose Jan. 20.

The department prepared two separate informational videos about the vaccine, one for staff and another for inmates. Both offered a scientific explanation of how the vaccine works and debunked rumors about possible negative side effects.

At least 34 inmates and six corrections department employees have died from COVID-19 since the pandemic started. Those numbers include the warden and medical director of Raymond Laborde Correctional Center in Avoyelles Parish. They died within days of each other during the early weeks of the pandemic.