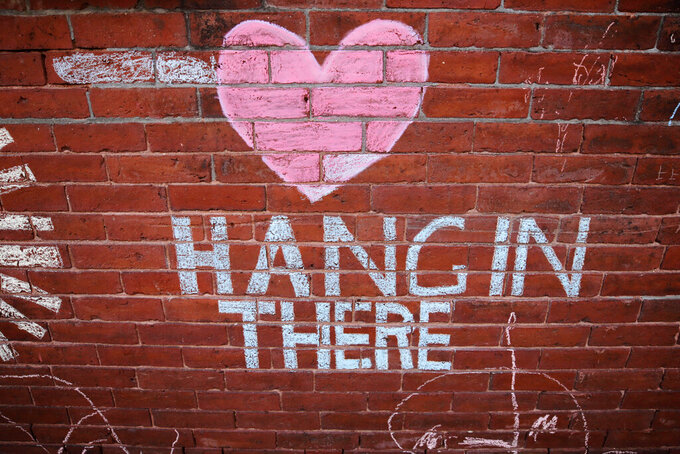 A heart and the words "Hang in There" adorn the wall of an alleyway, sharing an inspirational message, outside the Cravings Cafe and Gift Shop in Nashua, N.H., Wednesday, May 27, 2020. Many of the adults with disabilities that work at the cafe and gift shop have not been able to go to their usual jobs at the shop due to the COVID-19 virus outbreak. (AP Photo/Charles Krupa)

CONCORD, N.H. (AP) — New Hampshire plans to start breaking down most of its “flex facilities” to handle hospital overflow for coronavirus cases starting next week, saying that hospitals have created surge spaces of their own, if needed.

The state had set up 14 facilities around New Hampshire for about 1,600 beds. It plans to keep four facilities open in Manchester, Plymouth, Durham and Littleton.

“My job is to plan for the worst and hope for the best, and when we stood these surge sites up our hope was to never have to turn the lights on,” Gov. Chris Sununu said in a statement Thursday.

Other developments in New Hampshire:

Nearly 7,000 initial unemployment claims were filed in New Hampshire last week, down more than 1,800 from the previous week, the U.S. Department of Labor reported Thursday.

The latest number covers new claims through May 23.

The number of new claims in a week peaked at 39,000 in early April and has since been declining.

Adam DuPaul, owner of City Barber Shop in Keene, said he applied for unemployment benefits as soon as the state expanded eligibility to include self-employed workers.

DuPaul said he has found the Department of Employment Security’s website confusing -- at one point he ended up with three open claims. It’s gotten easier to reach someone at the department by phone, he said, but the assurances he’s received that help is coming aren’t paying his bills. Though hair salons and barber shops were allowed to reopen earlier this month, he wanted to wait until later in June.

“I truly feel like I’m forced to open this coming Monday,” he said. “I really want to get back to what I love, but I don’t want to feel unsafe doing it.”

A New Hampshire racetrack that violated the state's order prohibiting large gatherings has put its season on hold after Gov. Chris Sununu said the attorney general's office would take action against it.

Riverside Speedway in Groveton held races with spectators on Saturday despite being warned by police, the attorney general's office said.

Riverside announced Wednesday the season has been postponed until further notice because of the coronavirus pandemic. Riverside said it can still allow cars to practice.

Dartmouth College plans to apply for federal aid to help students during the pandemic.

The college is eligible for approximately $3.4 million through the coronavirus relief bill. President Philip Hanlon said in a weekly online forum Wednesday that the college will apply for the first portion — $1.7 million — which by law is designated for student aid.

“We certainly have students who have these needs,” he said.

Officials expect to announce on June 29 whether students will return to campus in the fall. A decision about first-year trips, a student-run pre-orientation program, is expected later this week.

As of Wednesday, 4,286 people had tested positive for the virus in New Hampshire, an increase of 56 from the previous day. Nine new deaths were announced, bringing the total to 223.