Most NHL teams using 2 goalies to get through pandemic play 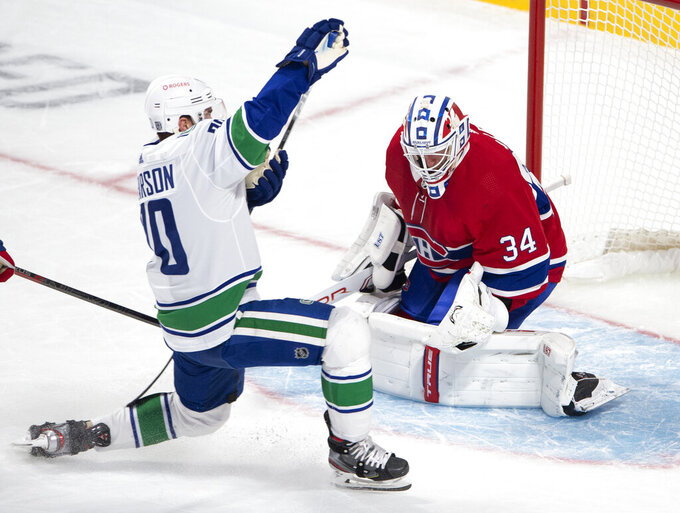 Most NHL teams are keeping two goaltenders busy, trying to keep them fresh as the frequency of games picks up with the league shooting to squeeze 56 games into less than four months.

Montreal, Boston, Carolina, Florida and Vegas are off to strong starts while essentially alternating starts between their goalies a few weeks into the pandemic-shortened season.

Tampa Bay, Toronto and Washington, meanwhile, are among the successful teams leaning heavily on their No. 1 players between the pipes.

The Panthers are the only NHL team without a loss in regulation with Sergei Bobrovsky and Chris Driedger starting the same number of games.

“Early on in the year, we’ll probably take a look at both of them," coach Joel Quenneville said. “The thought going into the season is that Bob is going to get a lot of games, but we’ll see.”

That was the plan going into last season, too, after Florida signed Bobrovsky to a seven-year, $70 million contract. Alas, the two-time Vezina Trophy winner had one of the worst seasons with a career-high 3.23 goals-against average and he went 1-3 in the playoffs last year.

The 26-year-old Driedger made the most of his limited chances to play, going 7-2 in the regular season with a 2.05 GAA after starting a total of three games over three seasons in Ottawa. Even with a shortened season, Driedger will likely surpass the 11 starts he had last season.

“It’s great for me to see some ice time," he said. “I can’t complain about that. It seems like it’s more of a trend around the league. You see the guys in Boston doing it."

The Bruins are in fact playing both Jaroslav Halak and Tuukka Rask regularly.

Carey Price, the NHL's MVP and Vezina winner in 2015, is sharing time with Jake Allen, who helped the Canadiens beat the Canucks on Tuesday night.

The Hurricanes have had one of the best duos in net so far. Petr Mrazek leads the league by allowing fewer than one goal a game and with a 95.4 save percentage, while James Reimer of the Hurricanes is giving up less than two goals a game.

Minnesota's Cam Talbot, who is splitting starts with rookie Kaapo Kahkonen, expects teams to use their goalies much differently than they have in the past with a lot of games played on consecutive nights.

“Managing workload and stuff like that is going to be huge throughout this season to make sure that we put ourselves in the best possible spot to not only make the playoffs, but make a deep run here," Talbot said.

And as much uncertainty as there is about playing in a pandemic, how a team fares in net will be a pivotal factor, as usual.

New York Rangers star Artemi Panarin had a goal and two assists in a win over Pittsburgh on Monday night, giving him 427 career points to rank sixth among undrafted players through 400 NHL games.

With the New Jersey Devils’ COVID-19 outbreak, all three U.S. divisions have had postponed games this season. Dallas and Carolina had games pushed back in the Central, while Vegas did in the West.

The Rangers aren’t attempting to find a way to terminate Tony DeAngelo’s contract after he cleared waivers. They would have to wait until after the season to buy out the 25-year-old defenseman.

New York assigned DeAngelo to the taxi squad, but doesn't want him around the team. A trade looks like the best option for both parties, if another team wants to take a chance on him and the team retains up to half of DeAngelo’s $4.8 million salary and cap hit.

“We’re talking about finding him another place to play and letting him move on with his career and wishing him the best of luck,” Rangers general manager Jeff Gorton said.

Philadelphia has been one of the NHL's top teams this season, but it is 0-2 against Boston. The Flyers potentially have a chance to even the season series against the Bruins with home games Wednesday and Friday night.