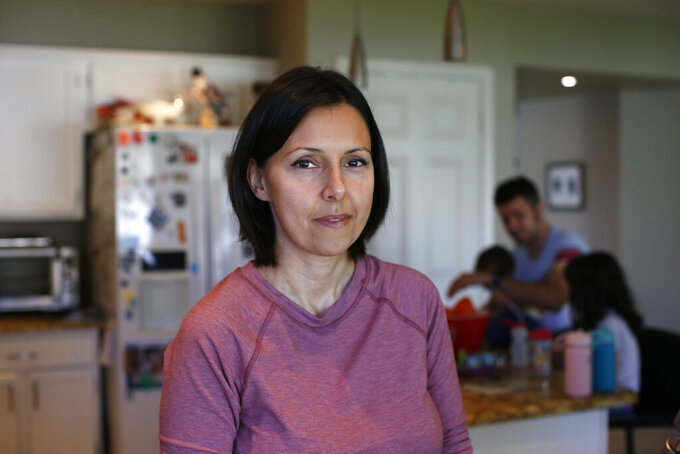 Katherine Rutigliano poses for a portrait in her home in Phoenix, Ariz., on March 15, 2020 photo. When she and her husband moved away from San Francisco in 2013, they figured they would never meet a fellow Democrat again. Rutgliano didn't realize it, but she had moved her family to what is now the front lines in American politics. (AP Photo/Dario Lopez-Mills)

PHOENIX (AP) — When Katherine Rutigliano and her husband moved away from San Francisco in 2013, they figured they would never meet a fellow Democrat again.

But housing was affordable around Phoenix. No more cramped condo. No more suffocating mortgage payments. No more tech-boom exhaustion. Everything would be easier for them and their kids in the suburbs — everything, that is, except talking politics with neighbors.

Then came an unexpected visitor at the door. It was a Democratic volunteer rounding up votes ahead of the 2018 Senate election. Rutigliano invited her in and inspected the map on her iPad. She was elated to see all the flashing lights that marked where Democrats lived in her stucco neighborhood on the northern edge of Phoenix.

These San Francisco transplants were not alone.

“It was like Christmas,” said Rutigliano, 37, a mother of three and trained chef who is now sending out mailers for local Democrats.

Rutigliano didn’t realize it, but she had moved her family to what is now the front lines in American politics. Once firmly in Republican control, suburbs like hers are increasingly politically divided — a rare common ground shared by Republicans and Democrats.

As such, they are poised to decide not just who wins the White House this year but also who controls the Senate and the contours of the debate over guns, immigration, work, schools, housing and health care for years to come.

The reasons for the shift are many. Suburbs have grown more racially diverse, more educated, more economically prosperous and more liberal — all factors making them more likely to vote Democratic. But demographers and political scientists are just as likely to point to another trend: density. Suburbs have grown more crowded, looking more and more like cities and voting like them, too.

For decades, an area’s population per square mile has been a reliable indicator of its political tilt. Denser areas vote Democratic, less dense areas vote Republican. The correlation between density and voting has been getting stronger, as people began to sort themselves by ethnicity, education, personality, income and lifestyle.

The pattern is so reliable it can be quantified, averaged and applied to most American cities. At around 800 households per square mile, the blue of Democratic areas starts to bleed into red Republican neighborhoods.

A purple ring — call it the flip zone — emerges through the suburbs.

But the midterm elections of 2018 showed that the flip zone has moved in the era of President Donald Trump, with dramatic consequences. When Democrats across the country penetrated deeper into the suburbs, finding voters farther away from the city, they flipped a net 39 House districts and won a majority of the chamber.

An Associated Press analysis of recent election results and density shows Democrats in Arizona moved the flip zone 2 miles deeper into the suburbs from 2016 to 2018, reaching right to the northern edge of Interstate 101 in Phoenix into areas filled with cul-de-sacs of homes and backyards large enough for swimming pools. The shift helped them win a Senate seat for the first time in 24 years.

The AP’s analysis essentially maps the challenge Trump and his Republican Party are facing today. Polling shows the president trailing Democrat Joe Biden badly in many key suburbs in battleground states. To hold the White House and control of the Senate, he and his party must stop the flip zone from moving farther out again.

Republicans are working against the recent trend in metros across the country. In 2018 in Milwaukee, the flip zone moved out less than half a mile as Wisconsin elected a Democratic governor. Its distance from city hall grew 2.6 miles in Richmond, Virginia, helping deliver the congressional seat once held by a conservative House majority leader, Eric Cantor.

Many political scientists think the trend toward political segregation has put the Democratic Party at a disadvantage. Its voters are more concentrated in cities. Republicans are dispersed across larger areas, making it easier for that party to draw favorable districts and win a majority of legislative seats even if it loses the total vote count. In 2018, Wisconsin Democrats received 53% of state assembly votes in 2018, yet they hold only 36 of the 99 seats in the chamber. Under the Electoral College, Republicans have twice in the modern era won the White House despite losing the popular vote.

The geographic divide has also had a real impact on policy and politics. The needs of cities and farm towns are often perceived as being in conflict — a tug of war between Republican and Democratic voters over resources. Until recently, scant racial diversity in the suburbs had allowed Republican politicians to cater to the concerns of white voters — and prey on their biases.

The geographic split also has exacerbated the tensions on display during the pandemic. Dense, Democratic areas were hit first by the coronavirus, allowing Trump to initially describe the disease as an urban problem and attack Democratic leaders for mishandling the response. Similarly, civil rights protests have been largest and most contentious in cities, and Trump has blamed their Democratic mayors.

Jonathan Rodden, a Stanford University political scientist and author of the 2019 book “Why Cities Lose,” said this political divide on density has eroded the shared responsibility among elected leaders. Instead, they think of themselves as representing different voter groups and that gives them less incentive to work together.

But he also believes the geographic divides can focus voters on local issues, where they’re more likely to have an impact, and lead to more local activism.

After the Arizona teacher strike in 2018, Democrats organized with the goal of increasing pay and reducing class sizes — issues with real impact on suburban families. A study by the Morrison Institute at Arizona State University had found teachers earned higher salaries in 2001 than in 2016 after adjusting for inflation. The effort galvanized local Democrats to elect Kathy Hoffman as state superintendent of public instruction, ending a 24-year Republican grip on the office.

“There are a lot of classrooms that don’t have certified teachers because the teacher pay is so god-awful,” said Mary Witzel, a retiree and member of a Democratic precinct committee in the Phoenix flip zone. “The whole education situation in Arizona is causing a lot of people who have never been engaged before to start paying attention.”

Cliche campaign ads might show acres of wheat and bustling cities, but the United States is a suburban nation.

AP VoteCast, a survey of the electorate, found that 52% of voters in 2018 said they live in suburbia. It’s not surprising that Trump and Biden have been tussling over suburban voters for months.

Trump has suggested that efforts to racially integrate the suburbs would destroy those communities with crime and poverty, despite clear data showing that many suburbs are increasingly diverse. At the first presidential debate, he accused Biden of wanting to kill off the suburbs.

“Our suburbs would be gone, and you would see problems like you’ve never seen before,” Trump said.

“He wouldn’t know a suburb unless he took a wrong turn,” Biden responded. “This is not 1950. All these dog whistles on racism don’t work anymore.”

In fact, not all suburbs are alike, and “knowing” them can be difficult.

There are the English-style garden cities built a century ago for the affluent. Following World War II, mazes of Cape Cod houses and ranches sprawled near highways. There are gated communities, over-55 communities, planned communities, working-class suburbs, inner-ring suburbs and distant exurbs — and all have their own local characteristics.

Likewise, these battleground areas — the flip zones — are not uniform, AP's analysis shows.

— In Dallas, the purple ring through the suburbs was 18.7 miles in 2016 out from city hall, at an average of 714 households per square mile. The border runs close to AT&T Stadium in Arlington, where the Dallas Cowboys play. Arlington is a so-called boomburb that morphed through new construction from a suburb to a city of 400,000.

— In Atlanta, the flip zone was nearly 24 miles out, at 434 households per square mile. It stretches out to diverse suburbs such as Kennesaw, where Black and Latino residents have nearly doubled their share of the population in the last two decades.

— In reliably Democratic Boston, Chicago and Seattle, one must drive out more than 40 miles, to what is essentially farmland, to find the flip zone.

Now the suburbs are the places delivering a referendum on Trump. And neatly manicured neighborhoods conceal a more complicated political biosphere.

The former long-haul trucker met his wife at church. He could not understand how so many in his breakfast fellowship saw the president as defending Christianity. Trump had stiffed contractors as a real estate developer and mocked veterans and immigrants — showing none of God’s grace.

Living in Glendale to the northwest of Phoenix, Militano turned on his computer two years ago and switched his voter registration from independent to Democrat. He and his wife cried after he told her.

“I want our country to get back to calm,” he said. “I’m not talking about kumbaya — I’m talking about rational. We haven’t done anything in this country in four years except hate.”

The 27-year-old was concerned by sometimes violent civil rights protests in distant cities this summer. He believes people in Glendale, where he lives and volunteers for the local GOP, want the stability of law and order. Republican leaders, he says, understand that.

Still, he’s started carrying a gun in his truck because “with what’s going on in our country, you don’t know what you’re going to end up in the middle of.”

Nudo grew up in the flip zone — when it was more securely Republican territory. During his freshman year in high school, his family lost their house to foreclosure as millions of other Americans did during the Great Recession. Then their rental house was foreclosed on, and they had to move again.

The experience instilled in him a conservative belief that the government, like families, must be financially responsible.

Now Nudo sees that housing crash as the beginning of another wave of change in his hometown — “a huge turnover.” As the economy recovered, big companies relocated workers from around the country. Others moved in chasing low housing prices and lower taxes and bringing their politics with them. The Phoenix area became splintered.

“You can walk across the street and be in a whole other community, whole other city,” he said. “But they’re your neighbors.”