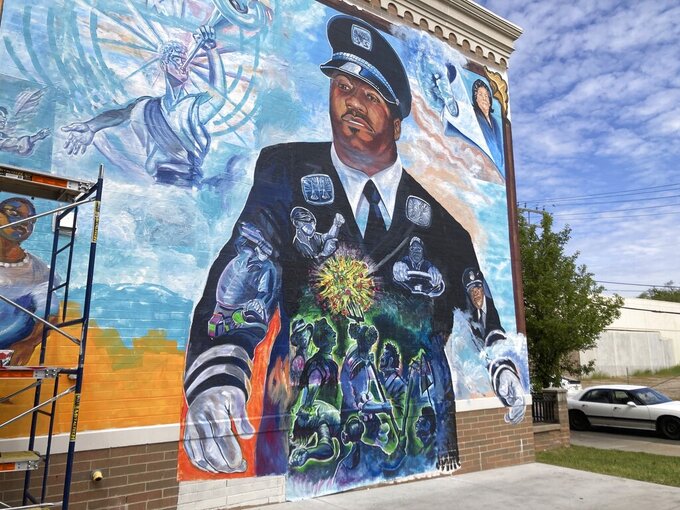 A large mural honoring firefighter Capt. Franklin Williams and other Detroit public employees who died from COVID-19 is displayed on the side of a building, Monday, May 31, 2021, in Detroit. The mural, which faces a Detroit fire station, was created by artist Charles “Chazz” Miller with assistance from students at University of Detroit Mercy, the Detroit Free Press reported. It was unveiled Sunday, May 30. (AP Photo/Ed White)

DETROIT (AP) — A large mural honoring a firefighter and other Detroit public employees who died from COVID-19 has been unveiled next to a fire station.

Capt. Franklin Williams of the fire department dominates the painting. But there are images of a bus driver who made an emotional plea for protection from COVID-19 before he caught the virus, and 5-year-old girl Skylar Herbert, who was the daughter of a firefighter and police officer.

“This mural represents community heroes representing those institutions who also fought for our country by putting on a uniform and fighting an unknown enemy: COVID-19," said Odie Fakhouri, chief operating officer of the Arab American and Chaldean Council, which owns the building on Seven Mile Road.

Williams, 57, was eligible to retire from the fire department but wanted to work until age 60. He died last summer.

"Some of them became ill, some of them were hospitalized, and Franklin made the ultimate sacrifice,” Fire Commissioner Eric Jones said at the Sunday unveiling.

The mural was created by artist Charles “Chazz” Miller with assistance from students at University of Detroit Mercy, the Detroit Free Press reported.

The mural has the face of bus driver Jason Hargrove, 50, who died early in the pandemic. He became ill four days after posting an angry, profanity-laced Facebook video about the risks when coughing passengers don't wear masks.

"Everybody in America” should watch Hargrove’s video, Mayor Mike Duggan said at the time.