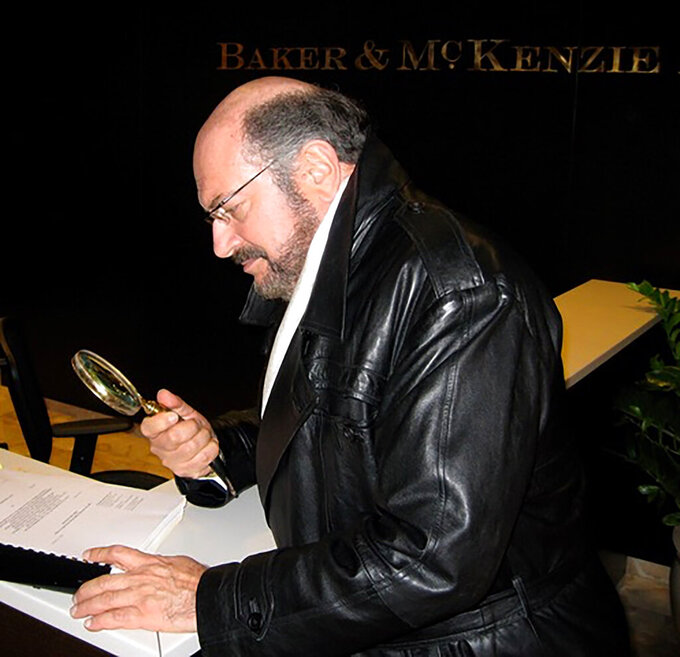 This 2007 photo provided by Matt Latella shows famous San Francisco private eye Jack Palladino in Toronto. Palladino died Monday, Feb. 1, 2021, never having regained consciousness after tussling with would-be robbers in his Haight-Ashbury neighborhood and hitting his head. His attorney confirmed that Palladino was taken off life support Sunday and died around noon Monday. He was 76. (Matt Latella via AP)

San Francisco District Attorney Chesa Boudin said he plans to file murder charges against Lawrence Thomas, 24, of Pittsburg, and Tyjone Flournoy, 23, of San Francisco, once the medical examiner releases the cause of Palladino's death later this week.

Palladino, 76, had stepped outside his home in the Haight-Ashbury district Thursday to try a new camera when Thomas and Flournoy tried to grab it, police said. He held on to the camera but fell and struck his head. He died Monday from his injuries.

Palladino worked on high-profile cases ranging from the Jonestown mass suicides to celebrity and political scandals. For example, Bill Clinton's 1992 presidential campaign hired Palladino to quell rumors of extramarital affairs, and Courtney Love hired him after being linked to unfounded allegations she played a role in the 1994 suicide of her husband, rocker Kurt Cobain.

Thomas and Flournoy have already been charged with attempted murder, assault with a deadly weapon and other crimes. It was not immediately known if they have attorneys who can speak on their behalf.

“As soon as we receive an official opinion from the medical examiner determining the cause of death, we plan to remove the ‘attempted' and charge both men with murder,” Boudin said.

He said the photos Palladino took before his attackers fled in a car were used by police to track down Thomas and Flournoy, who were arrested over the weekend in San Francisco and Reno, Nevada, respectively. The last photo he took will be crucial evidence in the case, Boudin said.

“Mr. Paladino was a San Francisco legend, someone who dedicated his career to pursuing justice and truth. It is fitting that his own camera helped capture evidence that we expect will help us prove this case to a jury,” he said.

Thomas and Flournoy are being held without bail and scheduled to be arraigned Tuesday.

San Francisco has seen an uptick on crime in recent months, with countless businesses and homes burglarized or vandalized, and a growing sense among residents that officials are not doing enough to deter property crimes.

Palladino's death and another fatal attack on an 84-year-old man prompted Boudin, Mayor London Breed and Police Chief Bill Scott to hold a news conference to say violence would be prosecuted.

Vicha Ratanapakdee, 84, was on a walk Thursday when a man ran up and shoved him before fleeing with a woman, police said.

Ratanapakdee, whose attack was captured on surveillance video, died of his injuries Saturday. Later that day, police arrested Antoine Watson, 19, and Maylasia Goo, 20, both of Daly City.

Boudin said he plans to charge Watson with murder and elder abuse causing death. It was not immediately clear if Watson or Goo have retained attorneys.

“I can’t even begin to understand how anyone can think of hurting a defenseless senior,” an outraged Breed said.

The mayor said the safety challenges San Francisco is facing are the same that many other cities are struggling with during the coronavirus pandemic but that violence wouldn't be tolerated.

“Let’s dispel the myth right now, that there are no consequences for committing crimes in San Francisco,” she said.