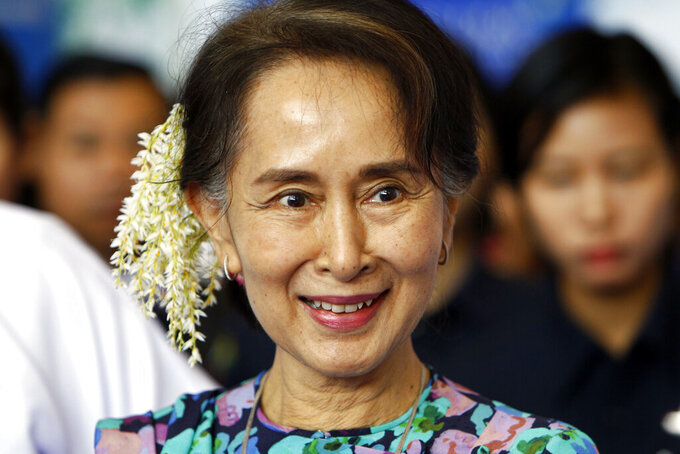 FILE - In this Dec. 14, 2018, file photo, Myanmar's deposed Leader Aung San Suu Kyi arrives to attend the Myanmar Entrepreneurship Summit at the Myanmar International Convention Center in Naypyidaw, Myanmar. The trial of Aung San Suu Kyi entered its second day Tuesday, June 15, 2021, with the prosecution presenting arguments that she incited public disorder and flouted coronavirus restrictions, part of a package of charges the ruling junta is seen as using to discredit her and consolidate its control. (AP Photo/Aung Shine Oo, File)

BANGKOK (AP) — Prosecutors in the trial of deposed Myanmar leader Aung San Suu Kyi presented arguments on Tuesday that she incited public disorder and flouted coronavirus restrictions, part of a package of charges the ruling military junta is seen as using to discredit her and consolidate its control.

Suu Kyi and other members of her government and party were arrested by the military after its Feb. 1 coup, and criminal charges were brought against some of the top figures on a litany of charges that their supporters and independent observers say are bogus.

The coup reversed years of democratic reforms following decades of harsh military rule and sparked widespread protests and international condemnation. Suu Kyi and her National League for Democracy party had been due to start a second five-year term in office after winning a landslide victory in a general election last November.

Suu Kyi has not been seen in public since her arrest, and her lawyers say they don't know exactly where she is currently being held. She has also had only limited time to consult with her legal team.

Her lawyers declined to tell journalists many details of the proceedings on the second day of the trial Tuesday in the courtroom in the capital, Naypyitaw, but said Suu Kyi was “very strong” and followed the process with close interest.

“She carefully listens to what the prosecutor says and she even discusses some points with us during the session,” said one of her lawyers, Min Min Soe.

Suu Kyi wore a dress in the traditional style of the Kachin ethnic minority and was in good health after having complained about a toothache a day earlier, the lawyer said.

Tuesday’s session covered a sedition charge brought against Suu Kyi, along with a second count of violating COVID-19 restrictions.

The sedition charge, which is sometimes described as incitement, provides for up to two years’ imprisonment for anyone found guilty of causing fear or alarm that could create an offense against the state or public tranquility. Ousted President Win Myint and the former mayor of Naypyitaw, Myo Aung, who are her close political allies and co-defendants, were also in court.

She said the defense raised an objection to the evidence, noting that all members of the party's central executive committee, including Suu Kyi, had already been arrested before the statements were posted.

The prosecution and defense will both file arguments on the matter at the next court session, she said. The court is scheduled to meet every Monday and Tuesday.

The sedition charge has been law since Myanmar was a British colony, and has been criticized as a catch-all statute that infringes on freedom of speech and is used for political repression.

The trial, which is closed to the public and media, began Monday with police outlining several of the cases against her.

They covered charges she had illegally imported walkie-talkies that were for her bodyguards’ use; the unlicensed use of those radios; and violation of the Natural Disaster Management Law by allegedly breaking pandemic restrictions during last year’s election campaign, her lawyers said.

Suu Kyi faces additional charges that have yet to be tried, among them accepting bribes, which carries a penalty of up to 15 years in prison, and violating the Official Secrets Act, which carries a maximum prison term of 14 years. But a conviction on virtually charge any could result in Suu Kyi being banned from running in any future election, which many believe is the military’s goal.

One of the reasons the military gave for conducting the coup was that last year's election was marred by fraud, an assertion rejected by independent poll watchers.

Suu Kyi's trial has renewed calls for her release and return to civilian rule.

U.N. deputy spokesman Farhan Haq, responding to a question on Secretary-General Antonio Guterres’ reaction to the trial, said Monday the U.N. position is clear: “We want her and all of the senior members of her administration to be freed.”

“The secretary-general has called for and continues to call for a reversal of the Feb. 1 coup and the restoration of the legitimate government of Myanmar, of whom Aung San Suu Kyi is a member,” Haq said.

Rights groups have said there is little chance that Suu Kyi will receive a fair trial.

Phil Robertson, deputy Asia director of Human Rights Watch, said the pandemic charges are related to instances during the campaign in which crowds came to see Suu Kyi or she greeted them, and noted that the military had not enforced such regulations for its own gatherings.

“Public health measures should not be applied in an arbitrary fashion,” he said. “Clearly there are double standards being applied in the prosecution of Aung San Suu Kyi.”