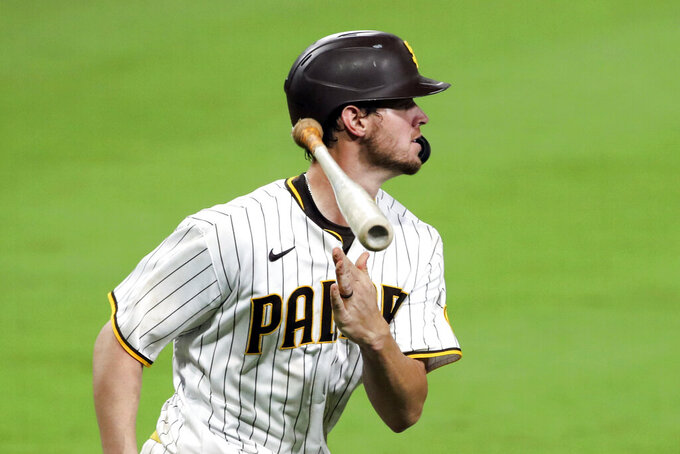 FILE - In this Sept. 14, 2020 file photo, San Diego Padres' Wil Myers flips his bat after hitting a solo home run off Los Angeles Dodgers relief pitcher Josh Sborz in the eight inning of a baseball game in San Diego. While Manny Machado and Fernando Tatis Jr. have grabbed most of the attention on the playoff-bound Padres, Myers' comeback performance has also been instrumental in returning San Diego to postseason play for the first time since 2006. Myers is hitting .291 with 14 homers and 38 RBIs in 52 games. (AP Photo/Derrick Tuskan, File)

While Fernando Tatis Jr. and Manny Machado have grabbed most of the attention on the playoff-bound Padres, Myers’ comeback performance has also been instrumental in returning San Diego to postseason play for the first time since 2006.

Myers’ six-year sojourn with the Padres has been twisted and often dismal, both at the plate and as a player on a team that lost with regularity. The longest-tenured Padres player, Myers has bounced back from his worst season and is putting up impressive numbers in the pandemic-shortened season.

Fittingly, Myers hit a big three-run home run in the Padres’ playoff-clinching, 11-inning victory against the Seattle Mariners on Sunday.

“Throughout my entire career I’ve hit some home runs, but this one the other day was pretty big,” he said. “To be able to have a hit that helped push us to get there was really cool.”

Myers came over from Tampa Bay in a three-team trade that also involved the Washington Nationals. He is the only player left from that group of high-priced veterans that failed to deliver Preller’s win-now vision. However, the GM sent Shields to the Chicago White Sox for Tatis in a steal of a trade in July 2016 that highlighted San Diego’s rebuild.

“In 2015 we had a good team here, a talented team with some names on it. At that time I didn’t think it would be 2020 before I’d be talking about postseason,” Myers said.

This is also the first season Myers has enjoyed the Padres having a winning record.

“Although there’s been a lot of downs, it’s kind of cool to be a player that’s kind of gone through the entire thing,” said Myers, who marveled earlier this season about how good it felt that the Padres were buyers, not sellers, approaching the trade deadline. “You get to see an entire rebuild process, the good and the bad times to it. Obviously the bad times happen, but when you’re in those it makes you appreciate this more. Certain years were tougher than others, but you sit back and you see the entire plan come together and I think that makes it a little more gratifying.”

Myers might have been moved by now if not for his struggles and an $83 million, six-year contract he received in January 2017, when the Padres declared him “the face of the franchise.”

He was an All-Star in 2016 and then largely struggled through injuries and position changes the following three seasons. Last year, he had 18 homers and 53 RBIs in 155 games, with 168 strikeouts.

“Anybody having their worst season, it’s tough,” he said. “Those are the times that make you better. It makes you really reevaluate what you’re doing. It makes you say, ‘You know what man, I don’t have this figured out,’ or I need to really drastically change some things so I look back at last year and I say, ‘Well, if I don’t have last year, who knows what happens this year?’ I look at it as a blessing because it’s one of those things that helps you respond to what’s next and for me I feel like that’s been the big thing for me.”

Myers was part of the “Slam Diego” outburst in August, when the Padres became the first team in history to hit a grand slam in four straight games and then five in six games. He hit another slam, plus a solo shot, at home against Colorado on Sept. 8.

First baseman Eric Hosmer has known Myers since they were both in the Kansas City Royals’ organization. Myers was traded to Tampa Bay prior to the 2013 season, when he was voted AL Rookie of the Year and helped the Rays reach the playoffs.

“It’s been classic Wil,” Hosmer said. “That’s the guy I played with when he was 18, 19 years old. When you put him in a competitive environment with a lot on the line, that’s when his talent shows the most. He can beat you in all aspects of the game. He’s got legs, he can certainly hit, his defense has been tremendous as well. It’s great to see.

“I know Wil was a big trade piece in Kansas City so he didn’t get to experience some of the stuff I experienced, but he’s as hungry as ever to experience it on his own,” said Hosmer, who helped the Royals win the 2015 World Series. “He’s been a big part of this team. He’s been quietly putting up an MVP-type season and it’s been amazing to watch. The confidence, the leadership that he has now, it’s been really fun to be a part of and it’s been really fun to watch him do.”