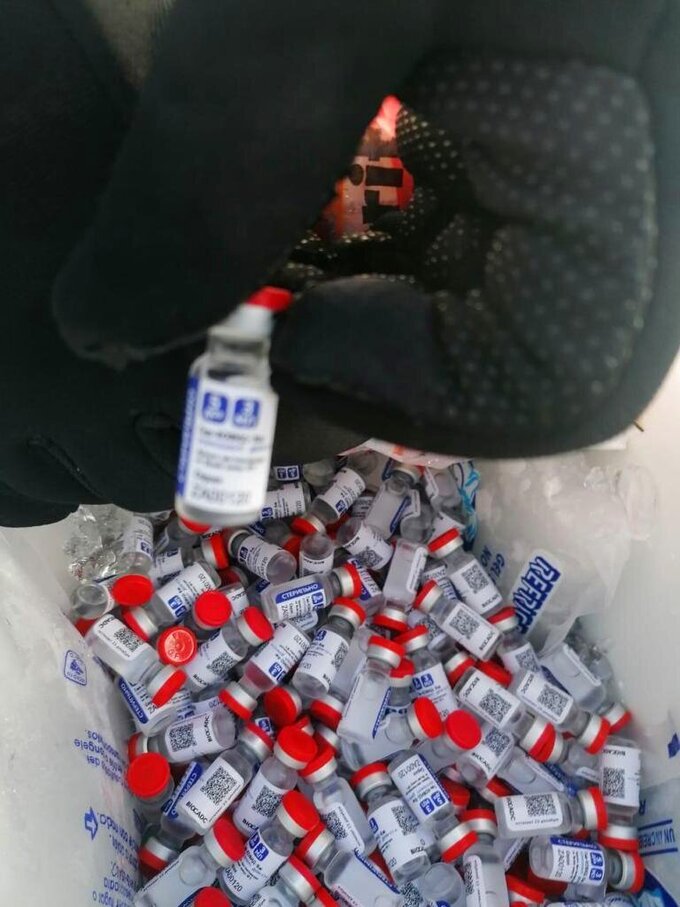 In this photo released by Mexico's tax agency, SAT, on March 17, 2021, officials show vials of seized, alleged Sputnik V vaccines for COVID-19 in Campeche, Mexico. RDIF, the Russian entity that paid for the vaccine's development, said these vaccines were fake after Mexican authorities seized them from a private plane en route to Honduras on March 17. (Mexican tax agency SAT via AP)

The Attorney General’s Office said the Mexican government's medical safety commission still hasn’t said what was in 1,155 vials found in false bottoms of ice chests aboard a private plane bound for Honduras.

Initially, the Russian vaccine’s distributor said they were not real Sputnik V vaccines.

But later the head of Mexico’s customs service said they appeared to be real, and now prosecutors say they don’t know.

The vials containing more than 5,700 doses were found inside two coolers packed with ice and sodas during an inspection at the airport in the Gulf coast state of Campeche.

A Honduran company, Grupo Karim’s, said in a statement that the vaccine was not intended to be sold in Honduras, but rather to be given free to its employees and their families. The company said its employees had been hit hard by the pandemic and it was looking for a way to help them.

The Attorney General’s Office said the seven Honduran crew members and passengers had left a hotel in Campeche and had not been detained, and they can't be charged until it is known what was in the vials.

The Russian Direct Investment Fund said in a statement Thursday that after reviewing photographs of the packaging, they determined the vaccine to be fake.

Grupo Karim’s did not offer any details about the vaccine’s purchase or its authenticity. The company has 20,000 direct employees.

Horacio Duarte, the head of Mexico's customs service, said the doses were not among the lot that has been purchased and administered by the Mexican government.