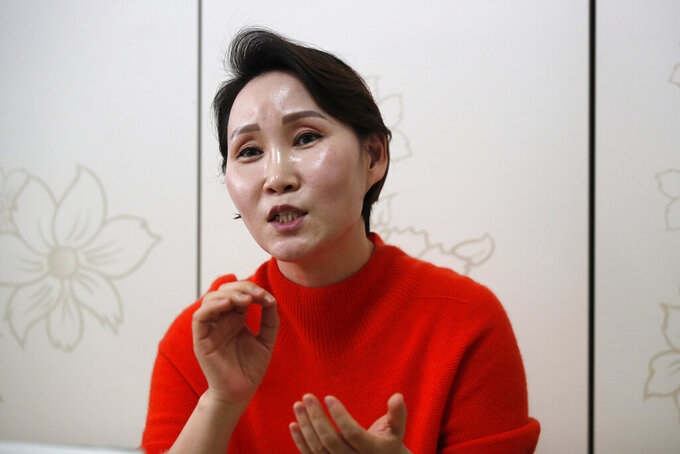 North Korean defector Choi Bok-hwa speaks during an interview in Ansan, South Korea, Wednesday, Feb. 17, 2021. For the first time in years, Choi didn’t get her annual birthday call from her mother in North Korea. Choi believes the silence is linked to the pandemic, which led North Korea to shut its borders tighter than ever and impose some of the world’s toughest restrictions on movement. (AP Photo/Lee Jin-man)

ANSAN, South Korea (AP) — For the first time in years, Choi Bok-hwa didn’t get her annual birthday call from her mother in North Korea. Each January, Choi’s mother had climbed a mountain and used a broker's smuggled Chinese cellphone to call South Korea to wish her happy birthday and arrange a badly needed money transfer.

Choi, who hasn't sent money or talked to her 75-year-old mother since May, believes the silence is linked to the pandemic, which led North Korea to shut its borders tighter than ever and impose some of the world’s toughest restrictions on movement.

Other defectors in the South have also lost contact with their loved ones in North Korea amid the turmoil of COVID-19 — and the trouble is not just on the North Korean side. The disconnection between defectors and their families in the North is shutting down an important emotional and financial link between the rival Koreas, whose citizens are banned from contacting each other.

Defectors in the South have long shared part of their income with parents, children and siblings in North Korea. But these defectors, who face chronic discrimination and poverty in the South, now say they’ve stopped or sharply reduced the remittances because of plunging incomes. Others are postponing them because they can’t contact the brokers who act as middlemen or because the brokers are demanding extremely high fees.

Choi, a singer in a North Korean-themed art troupe, last year earned only about 10-20% of what she usually gets because of canceled performances.

“I’m waiting for her call more than ever these days,” said Choi, 47, who lives in Ansan, just south of Seoul.

Many defectors use brokers to stay in touch with their families in the North, but that process is complex, expensive and risky.

Brokers in North Korea often use smuggled mobile phones to call the South from mountains near the border with China, where they can get better reception and avoid official detection.

The calls are often followed by money transfers, which require defectors to send money to the bank accounts of other brokers on the Chinese side of the border. The brokers in China and in North Korea are often separately smuggling goods in and out of North Korea. This means that money transfers don’t need to be sent across the border immediately; instead, brokers in North Korea can give the cash to defectors’ relatives and get paid back by their smuggling partners in China later.

But North Korea’s year-long border closure has battered the smuggling business, leaving brokers with little money to use for defectors’ remittances, observers say.

Gen. Robert Abrams, the chief of U.S. troops in South Korea, said last year that North Korea had sent special forces along its border with China to keep smugglers out and had “shoot-to-kill orders in place.”

Brokers in North Korea and China have long taken 30% of the money being transferred as commission. But during the pandemic some brokers have taken a 40-50% slice, according to defectors and activists.

There are no official, extensive studies on how the pandemic has affected money transfers. But separate surveys of several hundred defectors by civic groups showed 18-26% of respondents sent money to North Korea last year, down from about 50% in a similar-sized poll in 2014.

Shin Mi-nyeo, head of the Saejowi civic group that conducted one of the recent surveys, said that money transfers were down even before the pandemic because many defectors had cut contact with their families in the North for financial reasons.

“They are initially eager to support their families in the North because they know what their lives are like there,” Shin said. After a while, though, it becomes “out of sight, out of mind.”

Each time Choi’s mother called her, she often gave the phone numbers of neighbors who had fled to South Korea who weren’t answering calls from their families back home.

When Choi reached some of them, she said they told her that illness or financial difficulties meant they couldn't afford the regular requests for money from their families in the North, where the estimated gross national income per capita in 2019 was one-27th of South Korea’s.

It's not clear how much worse this will make the North's already moribund economy. South Korea’s spy agency last year reported a four-fold price increase of imported foods like sugar and seasoning in the North, while Chinese data show its official trade volume with North Korea plunged by 80% last year.

“The money we send is a lifeline,” said Cho Chung Hui, 57, who transferred the equivalent of $890 to each of his two siblings every year before the pandemic. “It’s such big money. If someone works really diligently in North Korea's markets, they make only $30-40 per month.”

Cho said his siblings used to travel for hours to the border to meet brokers and call him for money. But he hasn't heard from his siblings since November 2019.

Cho said some “robber-like brokers” now ask for a huge cut of the transferred money and that many of his defector friends are waiting for commissions to stabilize before resuming remittances.

South Korean law bans its citizens from unauthorized contact with North Koreans, but authorities don’t strictly apply the regulations to defectors because of humanitarian reasons. North Korean officials often overlook money transfers because they get bribes from those receiving money.

Cho, head of the Seoul-based NGO Good Farmers, said it’s “very burdensome” to send money to his siblings, but he'd do it again if his family called. “I feel sorry for them because we couldn’t come here together.”