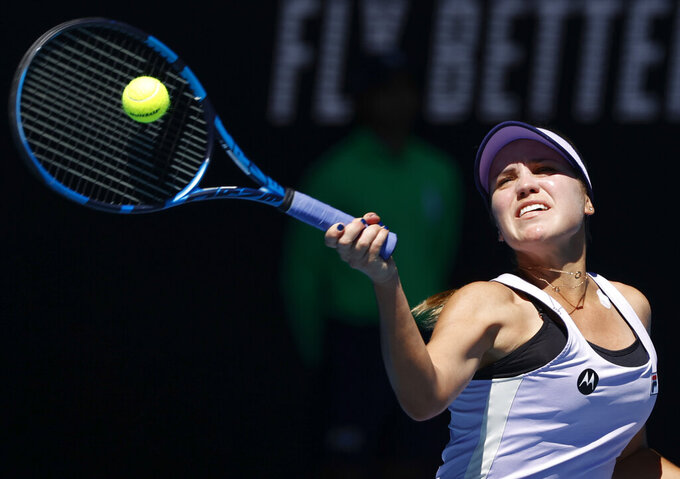 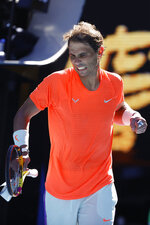 MELBOURNE, Australia (AP) — Facing a break point late in the third set, Rafael Nadal sprinted to his left and hit a running forehand winner from way out wide.

A slow-motion fist pump was a very subdued celebration by his standards. The 20-time major champion wasn't going to let the lingering back soreness that bothered him ahead of the Australian Open stop him from getting through the first round as soon as he possibly could.

Laslo Djere, ranked 56th, watched the winner land, held out both hands, and no doubt wondered what more he needed to do to win a point.

When Djere, going for everything, double-faulted to open what became the last game of the match, a woman in the crowd at Rod Laver Arena yelled out “It’s all right, Laslo.”

Easy for her to say.

Nadal finished off a 6-3, 6-4, 6-1 win in just under two hours Tuesday in his first competitive match of the year — he didn’t play for Spain at the ATP Cup last week because of the back stiffness.

“My back is not perfect, as I said a couple of days ago,” Nadal said. “Every day that I’m able to go through, probably there are more chances to get better. That’s the thing now — there is always a chance to improve, and that’s why I’m here playing and fighting to try to get better and then give myself a chance.”

A minor change to his service motion was among the precautions he took “survive” for the first round.

While Nadal has been slowly building into the tournament, Russia's ATP Cup-winning teammates have been on a roll.

In her first match at a major in more than a year, top-ranked Ash Barty dropped only 10 points in a 6-0, 6-0 rout of Danka Kovinic.

Barty lost to Sofia Kenin in the Australian Open semifinals last year and then skipped the U.S. Open and her title defense at the French Open because she stayed in Australia during the COVID-19 pandemic.

Sofia Kenin struggled with nerves in her first match as a defending champion at a Grand Slam tournament earlier in the day before beating 133rd-ranked wild-card entry Maddison Inglis 7-5, 6-4,

But Barty only needed 44 minutes to advance, saying she'd missed tennis “every single day” during her time away from the sport.

Players who were forced into hard lockdown — not allowed to leave their rooms for 14 days after landing in Australia last month — have struggled in the opening round.

Victoria Azarenka, a two-time Australian Open champion and the runner-up at last year's U.S. Open, appeared to have trouble breathing and received medical attention in the second set of a 7-5, 6-4 loss to Jessica Pegula of the United States.

Azarenka noted how difficult it was to prepare for a major tournament after being one of 72 players who were in a hard quarantine for two weeks — not allowed to leave their hotel rooms for any reason — after potentially being exposed to COVID-19 on her flight to Australia.

“The biggest impact for me personally has been not being able to have fresh air,” the 12th-seeded Azarenka said. “That really took a toll.”

Two-time Australian Open quarterfinalist Tennys Sandgren also went through the hard lockdown. After losing to No. 21 Alex de Minaur 7-5, 6-1, 6-1, Sandgren said for those who'd been through it, the tournament is “not feasible.”

“I’ve never walked on to a court in a Grand Slam knowing that I’m probably not going to be able to win,” he said.

And an even younger player, 16-year-old Coco Gauff, won 6-3, 6-2 against Jil Teichmann to set up a second-round showdown against fifth-seeded Elina Svitolina.

Other seeded players advancing included No. 6 Karolina Pliskova, No. 21 Anett Kontaveit and No. 25 Karolina Muchova.

No. 13 Johanna Konta left the court for medical treatment after winning the first set against Kaja Juvan and retired after dropping serve and falling behind 2-0 in the second.

Mayar Sherif made history for Egyptian tennis, beating fellow qualifier Chloe Paquet 7-5, 7-5 to become the first woman from her country to win a Grand Slam match.

“Obviously, it means a lot," Sherif said, "because finally this is barrier that I had to pass, a mental barrier.”