Nadal enters Madrid Open with improvement on his mind 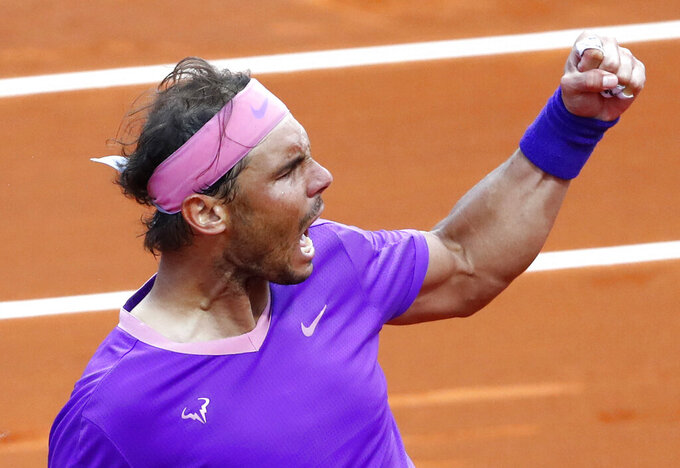 MADRID (AP) — Rafael Nadal hopes to use the Madrid Open to keep improving ahead of the French Open after a slow start to the season.

Nadal won the Barcelona Open last week for his first title of the year. The second-ranked Spaniard has been slowly gaining his best form following a long layoff prompted by the coronavirus pandemic.

“I haven’t played a lot, this will be only my fourth tournament of the year,” Nadal said. “Now it’s time to push, to make that extra effort entering the next three months.”

Nadal is also expected to play in Rome before returning to Roland Garros to try to win a record-extending 14th French Open title.

After losing to Andrey Rublev in the Monte Carlo quarterfinals, Nadal dropped multiple sets in Barcelona before eventually outlasting Stefanos Tsitsipas in the final.

He said the title, his record 12th in Barcelona, gave him a confidence boost.

“I really believe that winning these kind of tournaments when you are not playing that well then can make a big difference for the next ones,” he said. “So I feel that that was a positive week ... now is another week, and I hope to be ready, honestly.”

Tsitsipas should be one of Nadal’s top challengers again in Madrid. The Greek, who beat Nadal in the Australian Open quarterfinals, has been thriving this season and won in Monte Carlo in a final against Rublev. Nadal needed nearly four hours to defeat Tsitsipas in the Barcelona final.

Third-ranked Daniil Medvedev is seeded second in Madrid, with third-seeded Dominic Thiem ahead of Tsitsipas. Rublev and Alexander Zverev will also be playing in Madrid.

The Madrid tournament brings an extra challenge for Nadal as it's played at a higher altitude in the Spanish capital. But there will also be the boost of the crowd returning to the “Magic Box” tennis complex.

“(It's) the most difficult event for me, everybody knows,” Nadal said, referring to the altitude. “But at the same time is one of the most emotional events for me, playing at home. We gonna have a chance to play with crowd again. So that means a lot to me.”

Nadal has won the Madrid Open five times, but not since 2017. His opening match will be against either Spanish teenager Carlos Alcaraz or Frenchman Adrian Mannarino, who play Monday.

“My mindset is always the same,” Nadal said. “Arrive to a tournament, have the right preparation, and try to be ready to compete at the highest level (from) the beginning.”