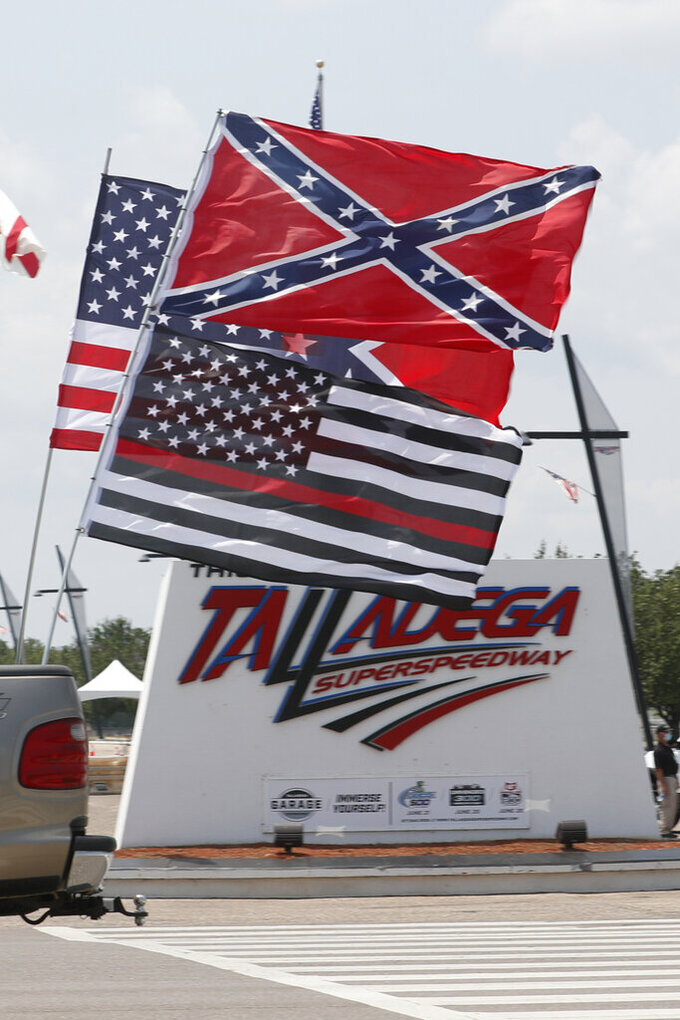 Race fans fly Confederate battle flags and United States flags as they drive by the entrance to Talladega Superspeedway prior to a NASCAR Cup Series auto race in Talladega Ala., Sunday, June 21, 2020. (AP Photo/John Bazemore)

Hours after Confederate flags were displayed outside the track — some flying from pickup trucks — in protest of NASCAR’s Wallace-led ban of the flags, the sanctioning body said it was made made aware of the noose late in the afternoon.

“We are angry and outraged, and cannot state strongly enough how seriously we take this heinous act,” NASCAR said. “We have launched an immediate investigation, and will do everything we can to identify the person(s) responsible and eliminate them from the sport."

Wallace, the lone Black driver in the elite Cup Series, drives the No. 43 Chevrolet for racing icon Richard Petty.

“The despicable act of racism and hatred leaves me incredibly saddened and serves as a painful reminder of how much further we have to go as a society and ow persistent we must be in the fight against racism," Wallace said on Twitter. “As my mother told me today, ‘They are just trying to scare you.’ This will not break me, I will not give in nor will I back down. I will continue to proudly stand for what I believe in."

NASCAR has not stated how exactly it plans to stop fans from displaying the flag on track property and none of the instances Sunday at Talladega were inside the facility.

The race, which was pushed back to 2 p.m. CDT on Monday, is the first amid the coronavirus pandemic in which NASCAR opened the gates for up to 5,000 fans. Those in the grandstands were urged to seek shelter roughly 30 minutes before the scheduled start, leading to a two-plus hour wait.

Denny Hamlin and Joe Gibbs Racing were set to run with an all-black paint scheme honoring the National Civil Rights Museum, with the museum's logo on the hood. Sponsor FedEx won't be displayed on the car.

The flag ban is another statement for NASCAR.

Fan David Radvansky, who started coming to Talladega in the 1990s when his father parked cars at races, was among fans applauding NASCAR’s decision to ban the Confederate flags.

“I don’t think there’s a place for it in NASCAR, to be honest with you,” the 32-year-old said. “That doesn’t sit well with all the good ole boys but it is what it is.”