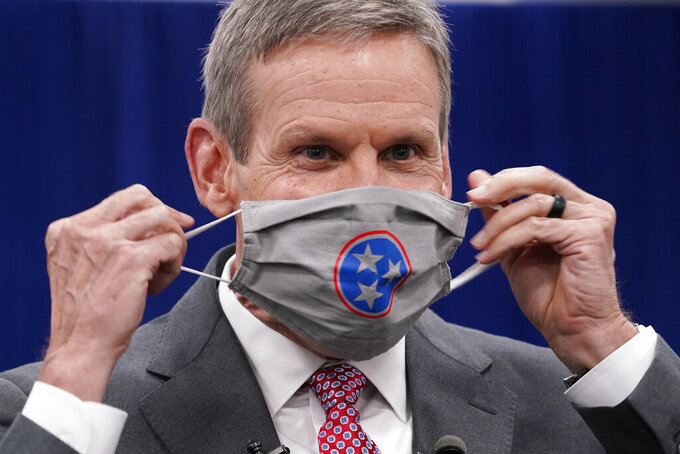 Tennessee Gov. Bill Lee puts on his mask during a break in the state budget hearings Tuesday, Nov. 10, 2020, in Nashville, Tenn. According to a Vanderbilt University School of Medicine study released Tuesday, Tennessee counties that have not required wearing masks in public are on average seeing COVID-19 death rates double or more compared with those that instituted mandates. Lee has opposed a statewide mask mandate, stressing personal responsibility. He has instead allowed counties to decide whether to require masks. (AP Photo/Mark Humphrey)

Cooper's office said the change effective Monday applies to public and private gatherings, and aligns with the eight-person maximum dining party restriction at restaurants. Nashville’s gathering limit has been 25.

Restaurants and bars can host up to 100 patrons per floor and per outdoor seating area.

Cooper urged people to follow the eight-person limit or to gather with only one other family group. He said applications for events larger than the limitation will get a stricter look over the next two weeks.

As the pandemic escalates throughout Tennessee and nationwide, Nashville has surpassed its July peak in cases with a 14-day average of 390 cases a day, or a seven-day average of 58 new daily cases per 100,000 residents, which is almost five times higher than in September, Cooper said.

Nashville has 362 COVID-19 patients hospitalized, up by more than 50% from Nov. 1, Cooper said. About one-third are from other counties, he added.

Statewide, the seven-day rolling average of daily new cases has risen from 2,226 on Nov. 4 to 4,546 on Wednesday. Tennessee is just one of 14 states poised to head into the holiday season without a statewide mask mandate.

Republican Gov. Bill Lee has left it up to counties whether to require people to wear masks in public and has stressed “personal responsibility.” He has lifted restrictions on businesses and gathering sizes for 89 of Tennessee's 95 counties and has declined to issue guidance on how families should gather for next week’s Thanksgiving holiday amid the pandemic.

Six metro areas, including Nashville, still can make their own business and gathering size restrictions.

The state has sought to sway the public on wearing masks through $6.3 million worth of advertising to date, with plans to spend more on the ad campaign next month, said Lee spokesperson Gillum Ferguson. The money comes from federal coronavirus relief funding.

In Shelby County — the state's largest by population — chief health officer Bruce Randolph said Thursday a plan is under development for vaccine distribution.

A two-dose vaccine could be available in early to mid-December in the county that includes Memphis, Randolph said. The first people to receive the vaccine likely would be patients at hospitals with underlying conditions, health care workers and first response personnel, he said.

Teachers and day care workers would likely come next, followed by the general population, Randolph said.

With a COVID-19 vaccine drawing closer, public health officials across the country are gearing up for the biggest vaccination effort in U.S. history — a monumental undertaking that must distribute hundreds of millions of doses, prioritize who’s first in line and ensure that people who get the initial shot return for the necessary second one.

The push could begin as early as next month, when federal officials say the first vaccine may be authorized for emergency use and immediately deployed to high-risk groups, such as health care workers.

Potential vaccines are still in the trial phase and have not been approved. They must be safe and effective before approval for use by the U.S. Food and Drug Administration.

Meanwhile, the state on Thursday reported a seasonally adjusted unemployment rate for October of 7.4%, an increase of 0.9 percentage points from September.

The state recorded an unemployment rate of 15.5% in April, an all-time high.

While most people who contract the coronavirus recover after suffering only mild to moderate symptoms, it can be deadly for older patients and those with other health problems.