Nashville out of MLS is Back after 9 players test positive 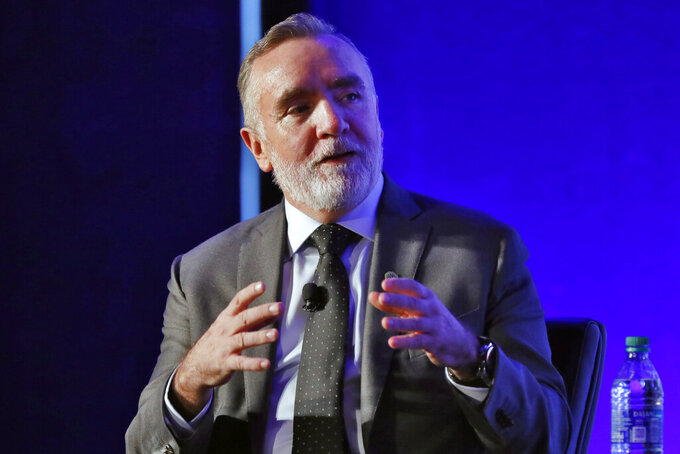 FILE - This is a Feb. 26, 2020, file photo showing Nashville SC CEO Ian Ayre during the Major League Soccer 25th Season kickoff event in New York. Nashville SC has withdrawn from Major League Soccer's MLS is Back tournament in Florida after nine players tested positive for the coronavirus, the league announced Thursday, July 9, 2020. “In what has been a challenging year, and in an uncharted environment created by the tornado that devastated our city and COVID-19, this is another big disappointing outcome for Nashville SC and its supporters,” team CEO Ian Ayre said in a statement. (AP Photo/Richard Drew, File)

Nashville SC has withdrawn from Major League Soccer's MLS is Back tournament in Florida after nine players tested positive for the coronavirus, the league announced Thursday.

Nashville is the second team to withdraw from the tournament. FC Dallas had to pull out after 10 players and a coach tested positive for COVID-19.

"Due to the number of positive tests, the club has been unable to train since arriving in Orlando and would not be able to play matches,” MLS Commissioner Don Garber said in a statement. “For every decision we make in our return to play, the well-being of our players, staff, officials and all participants is our top priority.”

Nashville SC was playing in its first season in MLS. The team dropped its first two matches of the season before the league shut down on March 12 because of the coronavirus pandemic.

Nashville was originally scheduled to play the Chicago Fire on Wednesday, but that game was postponed. CEO Ian Ayre said Thursday players were devastated by not playing in this tournament, and now the team will work on getting everyone healthy and back to Tennessee to prepare for the rest of the season.

“We’ve had it tougher than maybe any team's had in an expansion year so far, but that doesn’t mean we can’t recover and we can't be great again and bring the energy that we saw on Feb. 29 back to soccer in Nashville," Ayre said.

But Ayre was incensed at suggestions that Nashville didn't follow the league's protocols during training and denied that players had a going-away party before traveling to Orlando. He called former player and now broadcaster Taylor Twellman's comments during the Orlando City-Miami game “hugely disrespectful.”

“This virus is indiscriminate,” Ayres said.

The league revised its tournament schedule to reflect Nashville's withdrawal, which was first reported by The Athletic. The 24 teams playing in the tournament are divided into six groups of four teams for the group stage.

The World Cup-style tournament is being played at ESPN's Wide World of Sports complex at Walt Disney World. Teams are sequestered in two resorts and subject to rigorous virus testing.

The group stage of the tournament, which opened Wednesday night with Orlando City’s 2-1 victory over Inter Miami, runs 16 consecutive days. The results of the preliminary round count toward the regular season.