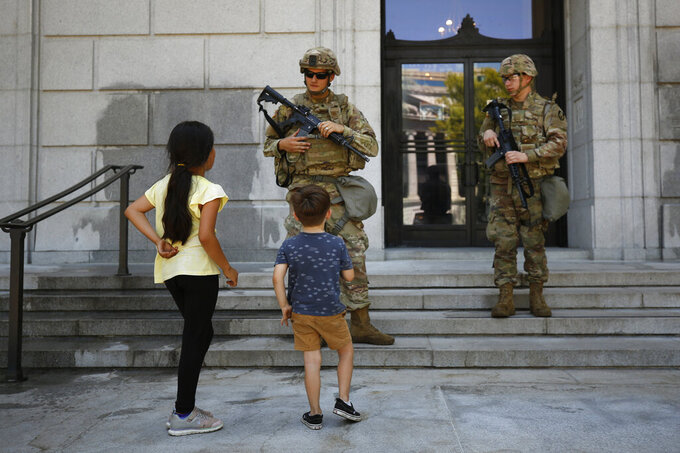 Bianca Luna, 6, left, and Elijah Ducey, 3, ask members of the California National Guard if they would like some water, as they stand guard at the Stanley Mosk Library and Courts Building in Sacramento, Calif., Tuesday, June 2, 2020. More than 2,400 members are deployed in several cities to guard infrastructure, freeing up law enforcement officers to respond to incidents like vandalism and looting that occurred during demonstrations sparked by the death of George Floyd, who died after being restrained by Minneapolis police officers on May 25. (AP Photo/Rich Pedroncelli)

SACRAMENTO, Calif. (AP) — More than 2,400 California National Guard soldiers toting military assault rifles are on the streets and authorities say that has allowed police officers to crack down on the rampant vandalism and thievery that scarred the first several days of demonstrations.

While the vast majority of protesters are peaceful, there have been violent clashes with police in Los Angeles, Sacramento, the San Francisco Bay Area and other cities.

Following a weekend that saw hundreds of businesses damaged, Sacramento received 500 Guard members on Monday, instituted a curfew and had a much calmer night.

“The National Guard are not playing a proactive law enforcement role," said Officer Karl Chan, a spokesman for Sacramento police. “They are guarding, and we’re using them to guard critical infrastructure to free up our officers to respond to incidents of a critical nature — vandalism, looting, things like that."

It was much the same in Los Angeles, where soldiers have been deployed since early Sunday after the city's 10,000 officers found themselves unable to stop vandals and thieves from targeting officers and ravaging businesses. Police vehicles were burned and windows on businesses smashed and the goods inside pillaged.

Los Angeles Police Chief Michel Moore on Monday described his officers as fighting a largely defensive action until the Guard arrived. Officers at times were pelted with rocks and other objects and the focus became dispersing the crowd rather than going after the perpetrators and allowing the vast majority of demonstrators who were peaceful to continue marching.

Police were largely, and often futilely, attempting to protect businesses, he said, until they staged hundreds of soldiers for that duty. That, for instance, allowed officers to stop a Foot Locker from being robbed a second time, Moore said.

“We captured and arrested those people. In the absence of the National Guard, we would not have been able to be there,” he said.

Guard soldiers cannot make arrests, but can detain suspects until law enforcement arrives. While their weapons are capable of fully automatic firing like a machine gun, Guard spokesman Lt. Col. Jonathan Shiroma said they are trained to fire one bullet at a time during civilian response operations, and then only in self-defense or the defense of others.

More than 2,000 Guard members had already been activated to help with the coronavirus pandemic, Shiroma said, but they are being moved to help law enforcement and replaced by members of the California State Guard force, a volunteer auxiliary.

The use of Guard troops remains controversial, with Black Los Angeles Young Democrats among those calling Tuesday for their removal from city streets.

“It’s clear that additional law enforcement will only further violence against people of color,” the group said in a statement.

It was the first large-scale used of National Guard troops since 1992 rioting over the acquittal of four police officers in the beating of motorist Rodney King. Looting and burning destroyed thousands of homes and businesses, especially in Koreatown and southern Los Angeles areas that were home to large minority communities. Thousands of National Guard members, aided by Army troops and Marines, were brought in to quell the violence.

Los Angeles Mayor Eric Garcetti said Tuesday that the Guard was deployed this time to places where buildings were broken into or were threatened.

“One place I said they would not go to is South Los Angeles," Garcetti said at a briefing. “I think that was a wrong move. We haven’t seen any looting going on there. There is no need. The wrong mistake would have been to say ... let’s go to places where people are black and brown because that’s where it’s going to happen.''

Gov. Gavin Newsom said as many as 4,500 soldiers were being deployed statewide, but as of Tuesday his administration said there were 2,430 on duty.

They included 1,300 in Los Angeles and the surrounding county, 100 of whom were in the city of Long Beach, which saw significant damage to businesses at a waterfront outlet mall on Sunday. Another 500 were assigned to aid the California Highway Patrol.

There also were 50 each assigned to El Dorado County, and to the city of San Leandro in Alameda County. Another 500 were assigned to aid the California Highway Patrol.

The National Lawyers Guild's Sacramento chapter regularly sends green-hatted observers to monitor actions protesters and police. President Elizabeth Kim said the Guard members are “projecting a level of intimidation that is setting back some folks.”

However, she said that didn’t stop protesters from leading a peaceful march. Afterward, the combination of the soldiers and the curfew freed police to focus on curfew violators, she said, including questioning her as she was escorting two journalists out of the area.

Chan said officers made about 50 arrests Monday, almost all for curfew violations meant to avoid a repeat of the weekend when small groups smashed their way into businesses late at night. The Guard stood watch over courthouses, the district attorney’s office, City Hall, Golden 1 Center and other downtown Sacramento hot spots.