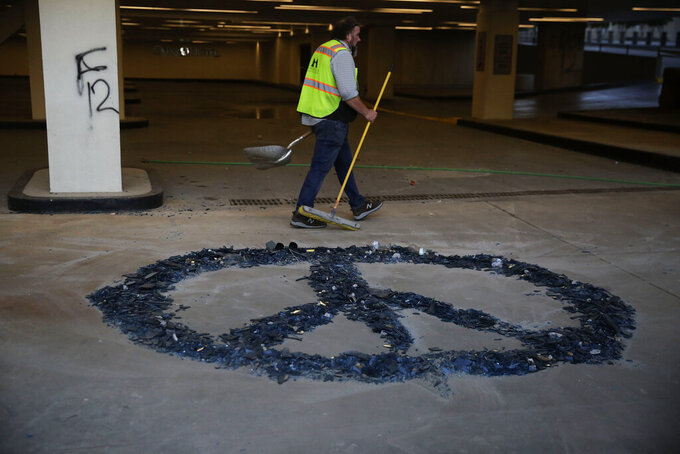 Bill Tracy walks past a peace sign he made from broken glass near the Omni Atlanta Hotel at CNN Center in the aftermath of a demonstration against police violence on Saturday, May 30, 2020, in Atlanta. Tracy said " It should have been peaceful, people aren't being heard when they are doing it peacefully, so they turn to violence, outrage, where are the influential people, they should be down here during the protest, where is John Lewis, the mayor?" (AP Photo/Brynn Anderson)

ATLANTA (AP) — Atlanta's mayor announced a curfew Saturday night and Georgia's governor authorized up to 1,500 National Guard troops to deploy throughout the city after a Friday night protest over the death in Minnesota of George Floyd turned violent.

Atlanta Mayor Keisha Lance Bottoms urged unity and nonviolence during a news conference Saturday evening. She said the curfew would be in effect from 9 p.m. Saturday to sunrise on Sunday, calling it a “very unusual and extreme step."

Bottoms, who made a passionate and personal plea to protesters the night before, also noted that Friday's demonstration, which began peacefully, took place amid a pandemic.

“If you were out protesting last night, you probably need to go get a COVID test this week," she said. "There is still a pandemic in America that’s killing black and brown people at higher numbers.”

Officials were also bracing for the possibility of new outbreaks of violence.

Atlanta Police Chief Erika Shields said at a news conference that they would have a zero tolerance policy Saturday night.

“Yes, you caught us off balance once. It’s not going to happen twice,” she said, later adding, “Quite frankly, I’m ready to just lock people up.”

Minutes before the curfew took effect Saturday night, police in downtown Atlanta appeared to use tear gas, causing hundreds of protesters to scatter. Police then began using zip-tie handcuffs and detaining protesters who refused officers’ directions to leave. At least 34 were arrested Saturday.

An Atlanta motorcycle officer was on foot at an intersection when he was struck late Saturday night by someone riding an ATV in downtown Atlanta, Atlanta police Sgt. John Chafee said. The officer had been directing traffic away from area where there were protesters.

The ATV driver went past the intersection once and then returned at a “high rate of speed,” Chafee said. The officer suffered “significant injuries to his legs,” but was alert, talking and stable.

Chafee didn’t have the name of the ATV driver, but said the man was taken into custody and will face charges. The driver suffered non-life-threatening injuries.

“It’s a fair question: ’Was this intentional,” he said. “At this point, that’s something we’re looking into.”

The behavior of the violent protesters Friday was markedly different from what they normally see, Shields said, calling them anarchists and a “highly calculated terrorist organization.”

“I don't say that loosely,” she said. “When you come in and your goal is to inflict harm, damage, property damage, without any regard for human life, you are a terrorist.”

Police were arresting protesters in blocked-off streets downtown near the CNN Center Saturday evening ahead of the 9 p.m. curfew. A few miles away, Georgia National Guard members and vehicles blocked a mall in the Buckhead area.

Protesters across from the street from the Georgia governor’s mansion threw objects at authorities lined up in front of the property Saturday evening. Gov. Brian Kemp was not inside the home at the time.

Kemp, who said he acted at Bottoms' request, declared a state of emergency late Friday.

Street cleaning crews and volunteers cleaned up debris as curious residents surveyed the aftermath. Graffiti on the big logo outside the CNN Center in downtown Atlanta had already vanished.

On Saturday morning, damage to businesses and some apartment buildings could be seen in parts of Buckhead, an upscale neighborhood north of downtown Atlanta where large groups moved late Friday night after demonstrations downtown splintered.

The demonstration Friday began peacefully with a rally at Centennial Olympic Park downtown, followed by a march to the state Capitol and then a return to the park, where they listened to speakers and said a prayer, said attorney Gerald Griggs, a leader in the local NAACP.

That peaceful protest wrapped up around 6:30 p.m. A splinter group of outsiders confronted police and became violent, Griggs said.

Atlanta was just one city shaken by tumult and violence late Friday that erupted over Floyd's death. Large demonstrations in New York, Houston, Washington, D.C., and dozens of other cities ranged from people peacefully blocking roads to repeated clashes with police. One person was killed in Detroit after someone fired shots into a crowd of protesters.

The mayor of Savannah held a news conference Saturday ahead of plans circulating online for a protest Sunday. Mayor Van Johnson said he plans to join the march, but warned that violence would not be tolerated.

Johnson said he understood how the deaths of Floyd in Minneapolis and Ahmaud Arbery in nearby Brunswick had sparked outrage — anger that he said has been amplified by the coronavirus pandemic in which people have seen family members die and lost jobs while being cooped up at home.

Derek Chauvin, the white police officer who worked for the Minneapolis Police Department, is charged with third-degree murder and second-degree manslaughter in Floyd's death.

Floyd died after the 44-year-old Chauvin pressed his knee into his neck for several minutes even after he stopped moving and pleading for air.