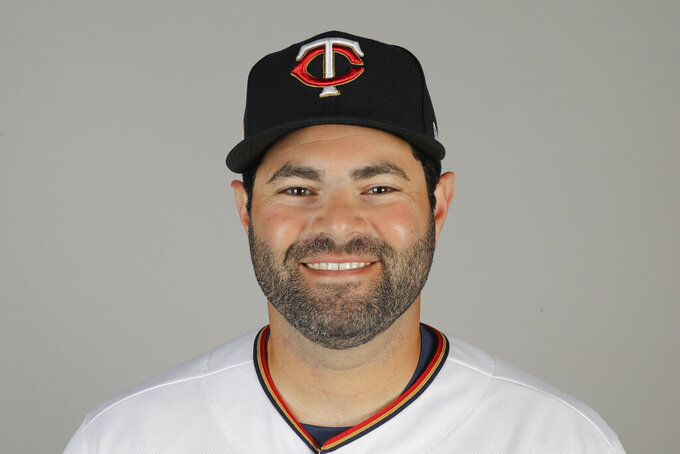 FILE - This is a 2020 file photo showing Alex Avila of the Minnesota Twins baseball team. Avila finalized a one-year agreement with the Washington Nationals on Wednesday, Feb. 3, 2021. The 34-year-old Avila is expected to be the primary backup to starting catcher Yan Gomes in Washington. (AP Photo/Brynn Anderson, File)

WASHINGTON (AP) — Alex Avila finalized a $1.5 million, one-year contract Wednesday with the Washington Nationals, who are expected to use him as the primary backup to starting catcher Yan Gomes.

Avila, who turned 34 last week, was a free agent after playing in 2020 for the Minnesota Twins, batting .184 in 49 at-bats during the coronavirus-shortened season. His deal calls for a $500,000 signing bonus that is protected against a shortened season and a $1 million guaranteed salary.

While he hasn't had any detailed discussions about his role with manager Dave Martinez or GM Mike Rizzo, Avila said: "Whenever Davey needs me in the lineup, I’ll be ready to go.”

“I don't think I'm going to be hitting fourth for this team,” joked Avila, who has thrown out 14 of 32 runners trying to steal over the past two seasons.

He has caught current Nationals starters Max Scherzer, Patrick Corbin and Jon Lester in previous stops. Scherzer, a three-time Cy Young Award winner, was the first new-slash-old teammate to text Avila after he agreed to go to Washington.

Avila said Scherzer wrote: “You get on, I’ll drive you in.”

“It’ll be a lot of fun catching Max again,” Avila said. “He was always one of my favorite guys to catch.”

His father, Al, is general manager of the Detroit Tigers, and the younger Avila said he entertained the thought of returning to that team.

"One day that will happen," Alex Avila said.

His addition was the latest in a flurry of moves by Nationals general manager Mike Rizzo after the team tied for last place in the NL East.

Note: Washington agreed on a minor league deal to bring back outfielder Gerardo Parra of “Baby Shark” fame. After being a part of the Nationals' 2019 World Series championship, Parra went to play in Japan in 2020.