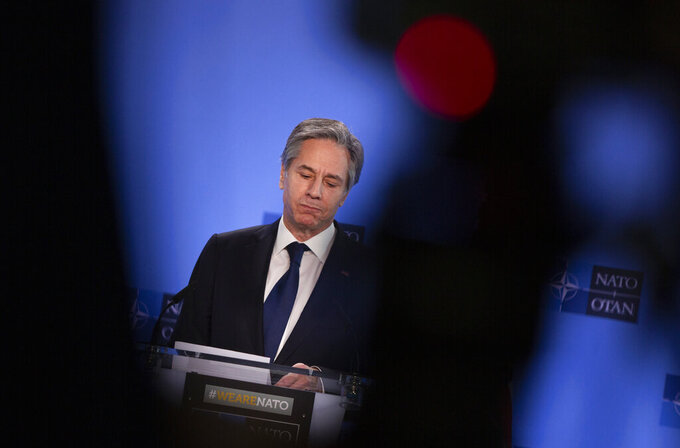 U.S. Secretary of State Antony Blinken speaks during a media conference prior to a meeting of NATO foreign ministers at NATO headquarters in Brussels on Tuesday, March 23, 2021. (AP Photo/Virginia Mayo, Pool) 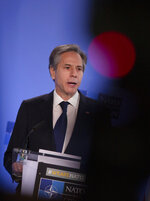 BRUSSELS (AP) — Since the coronavirus started spreading through Europe over a year ago, NATO's headquarters in Brussels has been off-limits to the media and others, but the military alliance now aims to get ahead of Belgium's vaccine program and have its staff guaranteed to be “virus-free” for a summit in June.

U.S. Secretary of State Antony Blinken and his NATO counterparts are meeting Tuesday in person at the 30-country organization’s headquarters to prepare the summit of national leaders, including President Joe Biden. It’s the first face-to-face meeting of foreign ministers at NATO since 2019.

The European Union, in contrast, called off an in-person summit in Brussels as virus cases spike and will now meet this week by videoconference. Belgium’s health authorities have said the country stands “at the foot of a third wave” of infections unless restrictions are strictly respected.

Across town at NATO on Thursday, around 20 Polish medical personnel will begin inoculating some of the estimated 4,000 people who work at the military alliance’s headquarters against COVID-19.

They plan to administer around 3,500 AstraZeneca vaccines.

Before the foreign minsters’ meeting he will chair, NATO Secretary-General Jens Stoltenberg praised Poland as “a highly valued ally” that is helping “to support NATO, to manage the consequences of the pandemic.”

“This is a joint fight, and we are stronger together. And of course, the vaccines will help and support our work here at the headquarters of NATO,” Stoltenberg said.

Asked for details, NATO said the offer is available to all headquarters staff, including people working at the 30 national delegations. It didn't reply to questions as to why a vaccination campaign is needed and why people working at NATO should have priority for shots.

Belgium is currently vaccinating people over 65 and those with medical conditions that might endanger their lives should they catch the virus. The disease has killed more than 22,000 people in the country.

Around 7% of the population has been vaccinated, and the government’s program is not running fast enough to ensure that everyone at NATO would be inoculated by the time leaders from Europe and North America gather in about three months. A Belgian official at NATO declined to comment.

NATO did say that “we continue to coordinate closely with the Belgian authorities” and that it will help arrange vaccinations for contractors, personnel from partner countries and the families of NATO staff through a Belgian vaccination center.

In Warsaw, the Polish government official in charge of the national vaccination program, Michal Dworczyk, said that as an ally, Poland was prepared “not only to take but also to give,” and that the vaccines will help ensure health safety at the NATO summit.

Dworczyk insisted that the program will not hurt government efforts to fight the coronavirus, despite some worry in Poland that the vaccine rollout is moving too slowly. He said the 3,500 doses make up less than 1% of the shipments the country is due to receive this week and that the medical personnel involved won't be taken from hospitals treating COVID-19 patients.

Many people in Poland didn't show up for AstraZeneca appointments last week because of the concern about the possibility of blood clots — fears the government rejects — and the vaccine doesn't appear to be in short supply.

According to the European Centre for Disease Prevention and Control, Poland has received around 1.24 million doses of the AstraZeneca vaccine and administered just over 640,000 doses, leaving around 600,000 doses in storage.

Since the coronavirus began spreading, NATO’s sprawling headquarters complex has been off-limits to reporters, but some were being allowed back in for Tuesday’s meeting, provided they could show a recent negative virus test result.

In downtown Brussels, journalists can freely enter the European Parliament building with their media credentials after passing through a temperature scanner.

Donald Trump was the first U.S. president to meet with his NATO counterparts at the new headquarters, in May 2017. The move from the old headquarters wasn't complete, and the leaders had the building mostly to themselves. The plan for Biden’s inaugural gathering is to have more staff on hand, aiming to ensure that the environment for the summit is as safe as it can be in terms of the coronavirus.

Vanessa Gera and Monika Scislowska in Warsaw, Poland, contributed to this report.